Project Signing: Government of India and World Bank Sign Agreement to Enhance Incomes for Over 200,000 Rural Households in Jharkhand

New Delhi, July 28, 2017 - The Government of India, the Government of Jharkhand and the World Bank today signed a $100 million loan agreement to help improve livelihoods and incomes of rural households in Jharkhand. 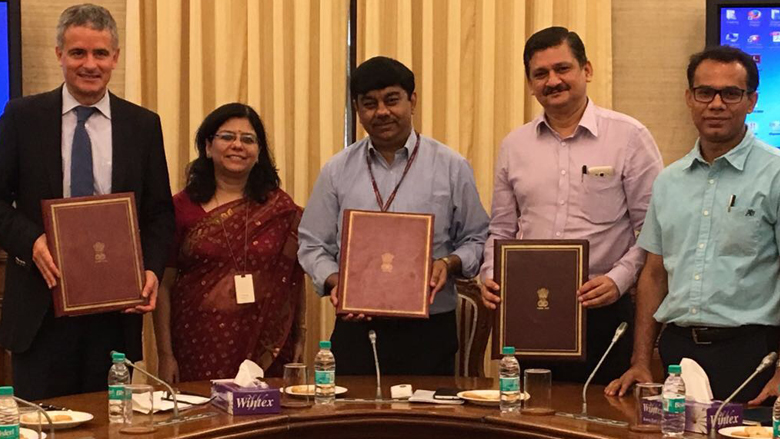 Sixty percent of farmers in Jharkhand are marginal and small farmers, practicing rain-fed, single-cropped farming and are highly vulnerable to climate change. Recent droughts had resulted in 40 percent crop losses in the state.  The Jharkhand Opportunities for Harnessing Rural Growth Project (JOHAR), will help the state develop climate-resilient agriculture by focusing on year-round cultivation of vegetables and diversifying into new high-yielding varieties of pulses and oilseeds. The project will also demonstrate resilient technologies for improving productivity and reducing climate risk in paddy, promote community-based micro irrigation and support the producer groups to move into value added sectors like livestock, fisheries, and non-timber forest produce.

“Improving farm profitability and rural incomes, especially in rain-fed areas can play a central role in achieving rapid and inclusive agricultural growth. By closely aligning with the institutional structure of women self-help groups in the state, this project will contribute to the government’s efforts at reducing gender gaps in agriculture and financial inclusion, and also help to improve food and nutrition status of rural mothers, adolescent girls and children in Jharkhand,” said Chakib Jenane, Acting Country Director, and Lead Agriculture Economist, World Bank, India. “India can put itself on a firmer economic growth path if states such as Jharkhand move toward transformative development,” he added.

Today, 13.5 percent of the net sown area in Jharkhand has access to irrigation and only 5.72 percent of rural households own any irrigation equipment. The Government of Jharkhand is making efforts to enhance available resources through rainwater harvesting and watershed management, and scaling up water-use efficiency through micro-irrigation. Given the smallholdings of farmers and their relative inability to make large investments individually, JOHAR will support micro-scale irrigation schemes that are community owned, operated and maintained. New irrigation structures will include, among others, construction of farm ponds, lift irrigation schemes, and shallow wells. JOHAR will converge with the Government of Jharkhand’s existing programs on irrigation, watershed development and on-farm water use efficiency to maximize the sustainability and impact of water management interventions.

Horticulture and livestock are among the fastest growing sectors in Jharkhand. The state has made rapid progress in horticulture with around 4.27 lakh hectares under vegetables and fruits (out of the net sown area of 23.62 lakh hectares) and an all-India ranking within 10 for several vegetable crops. Livestock too is a high-value option for landless households. Market prices for meat and eggs have increased by 70–100 percent in the past decade in local markets and have also pushed up farm gate prices. The state has maintained a high growth rate of 17.23 percent in fish production over the past 11 years, despite limitations such as dependence on seasonal water bodies and recurrent droughts and contributes to 60 per cent of the country’s production in non-timber forest products. JOHAR will support producer collectives, improve production in these value added sectors, develop capacities of producers on post-harvest management and marketing and deliver skills training for community cadres and entrepreneurs.

“The project will build upon the institutional platform of rural women created under the government’s National Rural Livelihoods Mission (NRLM), and target households that are ready to intensify, diversify, and enhance market orientation of agricultural production. While the project will intervene in several of the sectors that NRLM is also engaged in, the key difference would be its emphasis on water management, creating linkages with the market, financial interventions and skill development to support high-value production for augmenting rural household incomes,” said Priti Kumar and Grant Milne, Senior Agriculture Specialist and Senior Natural Resource Management Specialist, and World Bank’s Task Team Leaders for this project.

The $100 million loan from the International Bank for Reconstruction and Development (IBRD), has a 5-year grace period, and a maturity of 19 years.