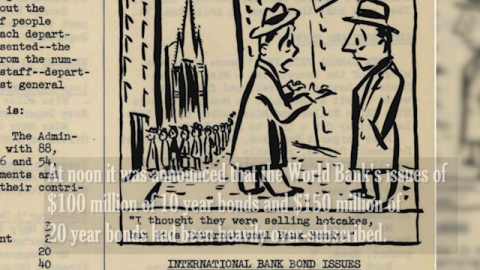 Watch: The Story of the First World Bank Bond

Mr. George D. Woods, President of the World Bank, today announced that a loan of $250 million, made in 1947 to the Credit National, a financial institution acting for the French Government, has now been sold in its entirety and is no longer held by the Bank. The Banque de France has purchased $58.6 million of the loan representing the last remaining maturities to be held by the World Bank. This was the Bank's first loan, and is the largest it has ever made.

The loan was for a term of 30 years with interest of 4-1/4% a year; and repayments of principal began in 1952. Over the past 13 years the Bank had sold a total of 70.7 million of the loan to various governments and private institutional investors. In addition to the purchase announced today, the Banque de France had purchased $60.7 million of the loan in April 1963 and, together with a French savings institution, had purchased $60 million in March 1962.

The loan helped France to sustain the flow of essential imports in 1947, at a critical time in the French postwar recovery program. It financed the purchase of a wide variety of goods. The transportation system was improved through the purchase of equipment and materials for rail, ship and air transport. Coal and oil, essential to industry and transport, figured largely among the purchases, as did industrial raw materials, including semi-finished steel products, copper, zinc, lead and cotton. The coal purchased amounted to 6,919,000 tons, or two-thirds of coal imports from the United States during the first 11 months of 1947. The loan also paid for 1,218,000 metric tons of petroleum products, for 165,000 bales of cotton, and for more than 250,000 tons of steel products which were used for public works, reconstruction, public utilities and transportation, plant reconversion and the repair and building of the merchant marine. In addition, Bank funds helped finance two steel mills: a continuous cold rolling mill at Montataire with an initial annual capacity of 300,000 tons of high-grade steel sheets, and a continuous hot rolling mill at Denain with an initial annual capacity of 800,000 tons of hot strip.