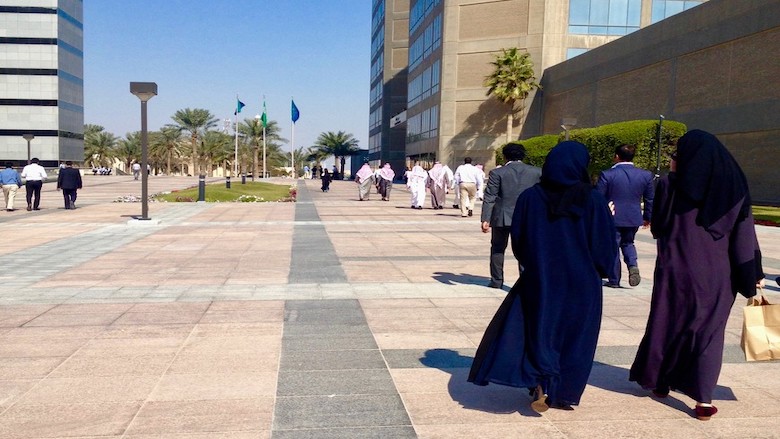 This article was originally published by Brookings Institute here.

In many developed countries, the pandemic has caused seismic shifts in labor markets. What started as an increasing shortage of workers in a few industries has soon become the "Great Resignation": a record number of workers not returning to their jobs after the initial lockdowns. More recently, evidence came to light that these workers are not necessarily leaving the labor market altogether. Rather, they are re-assessing their career paths, changing sectors, looking for jobs with more responsibilities, starting businesses, or freelancing. This is leading to worker shortages as workers are moving around in the labor market seeking better opportunities. What these high-income countries are observing is not so much the great resignation but rather "The Great Reshuffle".

For evidence of a great reshuffle, look no further than Saudi Arabia. The labor market of the oil-rich country is experiencing one of the most rapid transformations in the world. Saudi nationals—particularly Saudi women—are joining the labor market at unprecedented rates, a trend likely sparked by recent reforms targeting female employment. Unlike most high-income countries, labor force participation in Saudi Arabia actually increased during the pandemic. At the same time, foreign workers—who make up over 70% of the workforce in the private sector—are leaving employment in large numbers, driving a sharp and rapid contraction in total employment. Almost 1 million jobs have disappeared since the start of the pandemic.

Evidence of a post-pandemic worker reallocation in Saudi Arabia is starting to emerge. Job churning—the simultaneous existence of hiring and separations—in the last two quarters of 2021 has almost doubled from the previous year. The number of Saudi citizens quitting their jobs in the third quarter of 2021 is up 95% from a year earlier. Resignations further increased in the third quarter of 2021, reaching 3% of total private sector employment. Roughly 270,000 workers—most of them Saudis—quit their jobs in Q3 2021 compared with 134,000 in Q3 2020 and 152,000 in Q3 2019. On the other hand, hiring of new workers is rapidly picking up after the pandemic-related slump of last year. The job churn rate–defined as the sum of new hires and resignations as a share of all jobs—in the Saudi private sector stands at 6.7% of employment (Figure 1). 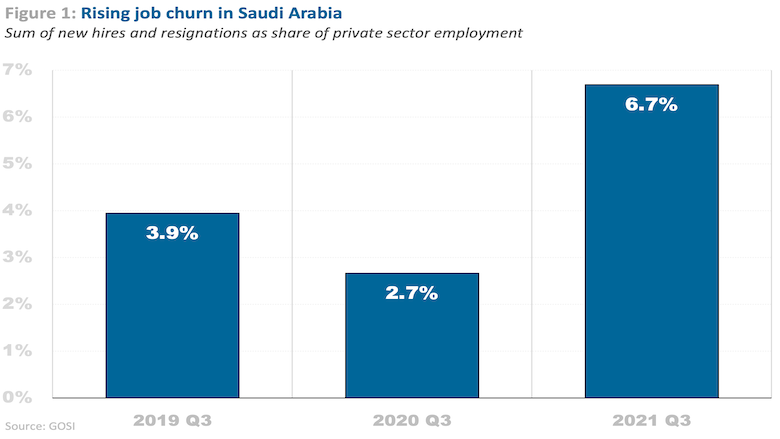 There is always churning in the labor market, but increasing churn is typically a sign of strengthening labor markets. Churn refers to turnover that is not related to job creation or destruction, so it is not a measure of net job creation but of labor market fluidity. If churning workers move to more productive jobs, firms, and sectors, it can be productivity-enhancing and therefore a positive development. An increasing pace of worker reallocation can also lead to more efficient matching between workers, skills, and jobs.

Furthermore, labor mobility among foreign workers is increasing. In Q3 2020, job transfers had increased by 23% compared to a year earlier, but by Q3 2021 that annual growth rate has increased to 93%. Recent changes to the Kafala sponsorship system have allowed foreign workers to change employers.

What is causing the Great Reshuffle? The factors driving the great reshuffle around the world remain unclear. The most relevant experience comes from OECD countries. In the third quarter of 2021, the number of resignations in the United States reached 4 million, a record high of 3% of total non-farm employment. Resignations were highest in some services sectors, like accommodation and food services (7%), leisure and hospitality (6%) and retail (5%), suggesting that workers are seeking better opportunities in higher productivity sectors. Workers have more leverage to bargain for higher wages and better working conditions.

In Saudi Arabia, this reshuffling could also be driven by improving economic conditions and a tightening labor market. Economic activity is rebounding, driven by rising oil prices and surprisingly strong growth in non-oil activities. As foreign employment continues to decrease and unemployment among Saudis reaches record lows (11.3%), employers may be facing more difficulties finding qualified labor to produce output.

More favorable labor market conditions may also be facilitating workers’ transitions toward higher paying, better jobs. Average wages for Saudi workers are on the rise (Figure 2), particularly for highly educated Saudis. In fact, wages are growing faster for Saudis with college degrees than those with secondary education, at 6% and 1% respectively. Moreover, the new jobs are increasingly concentrated in high-skilled occupations. Roughly half of all new Saudi hires (51%) in the third quarter of 2021 joined employment in the professional or associate professional categories, compared to only 15% a year ago. Higher wages and the availability of more suitable work opportunities may be prompting Saudi workers to quit and seek better opportunities in new jobs. 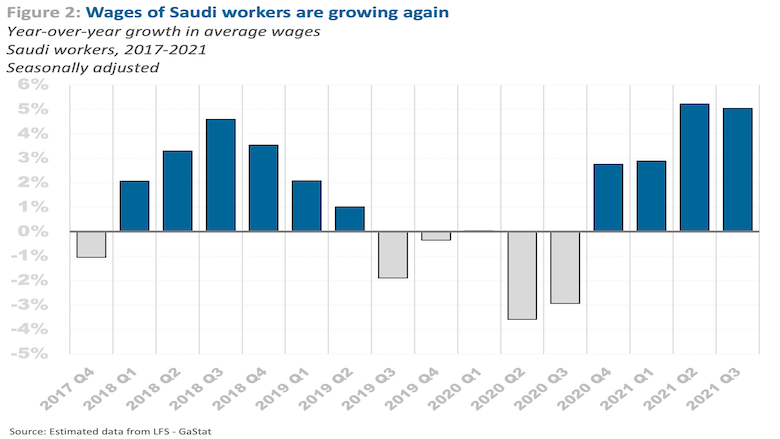 There may be other factors at play. Studies are showing strong preference for remote work or hybrid arrangements, as flexibility becomes more and more important to workers. This could be happening in Saudi Arabia as well. According to Google Trends, searches for the terms ‘jobs’ in conjunction with ‘remote work’ in Saudi Arabia have increased by 190% in the past two years. As always in Saudi Arabia, the role of the Nitaqat—a policy that forces firms to hire a certain number of Saudis—has to be considered. For example, private sector resignations among Saudi women have doubled in the last two years. This could also mark a winding down of ‘ghost employment’ created by Nitaqat. Now that more opportunities for women open up in the economy, those women who, in the past, have been hired by companies only on paper to fulfill the Nitaqat quota are resigning to seek genuine employment.

In any event, a more dynamic labor market may give Saudi workers more agency and leverage to bargain for higher wages and better working conditions. Whether these trends translate into productivity gains will ultimately depend on the extent to which worker reallocation is from low to high productivity firms.