Over the past few years, Morocco has made significant strides in improving its overall business environment. Private sector development, as a major driver for growth and job creation, topped the government’s priorities. The National Committee for the Business Environment (CNEA) was set up to roll out reforms to improve the business climate, in coordination with private sector players. Important reforms and initiatives to spur private sector growth have subsequently taken place to improve competition, reduce red-tape, and boost manufacturing ecosystems.

But today, Morocco, like many other countries across the globe, sees the momentum of its business environment reform stymied by the Covid-19 outbreak. From large firms to the smallest businesses, Morocco’s enterprise ecosystem is starting to feel the effect of the global and domestic downturn.

At the World Bank Group, the Country Enterprise Survey is an effective tool to monitor and assess private sector productivity. Right before the Covid-19 pandemic, the World Bank Group, in collaboration with CNEA, conducted the survey in Morocco from May 2019 to January 2020, interviewing managers of 1,096 formal sector firms across the Kingdom, based on a representative sample provided by CNEA and Morocco’s Planning agency (HCP). As the pandemic broke out, a follow-up survey was conducted between July and August 2020 to assess the preliminary impact of the crisis. It is important to stress at the outset that the survey does not capture the 4.3 million households who depend on informal sector work – be it through self-employment or wage employment in informal firms.

The findings illustrate the impacts of the unfolding crisis. The combined domestic and global effects of the crisis have severely affected firm’s performances, liquidity, and solvency. Today, at least 6% of firms have exited the market. Businesses surviving the tide of closures are not immune to current market-related challenges, and the climate of rampant uncertainty is especially harmful for investment: 82% of firms reported decreased demand for their products and services. Nearly half (47%) of Moroccan firms’ sales were lost during the pandemic. Small enterprises were the least resilient, showing a loss of 50% of their sales. In comparison, Jordanian and Italian firms lost 51% and 47% respectively.

The decline in firms' operations led to workforce reductions: 50% of Moroccan firms declared having reduced the total hours worked per week, and 14% of them decreased the total number of permanent workers. The resulting average change in permanent workers is -4%. In comparison, Jordan and Italy recorded -19% and -3%, respectively.

Overall, findings of the Enterprise Survey complemented timely and consistently the latest HCP survey, which estimated that 57% of companies had to totally or partially suspend their activities in April 2020, and that 726 000 jobs were lost (about 20% of total formal jobs), mostly in Micro, Small, and Medium Enterprises (MSMEs). Furthermore, based on a comparison of data from the Enterprise Survey across a sample of both developed and developing countries, Moroccan formal firms could perform better, in terms of survival rates under cash tensions (with an estimated survival time of 9 weeks), than companies from countries such as Greece, Portugal, or Turkey.

Since the outbreak, the government of Morocco has been proactive in deploying an aid package to support continued access to credit for small and medium-sized firms. The government created a US$ 3.3 billion emergency COVID Fund to support firms’ treasury and working capital requirements. For the recovery phase, a Strategic Investment Fund (“Fonds Mohammed VI pour l’Investissement”) is being set up to finance infrastructure projects and complete the financing support tools for companies, which are designed to avoid waves of bankruptcies in the aftermath of the crisis. The Fund is part of a broader recovery package that also includes guarantees for bank lending worth an additional MAD 75bn. The size of the package places Morocco well above the average for emerging markets (chart). 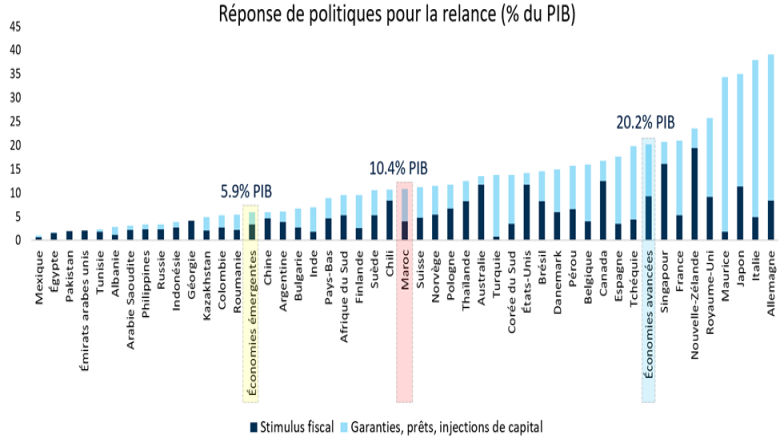 But beyond the immediate effects, the crisis has shown structural deficiencies in the country’s private sector composition. The large competitiveness gap between modern sectors (automotive or aeronautics) and low productive or declining sectors (such as handcraft or textiles) is a growing challenge. Moroccan companies remain positioned on low value-added segments of the value chain, such as cabling. In many sectors, firms remain polarized between a few dominant well-established actors in monopolistic or oligopolistic situations and a majority of low-competitive MSMEs, which account for about 93% of all companies (HCP 2019).

Access to finance and financial sustainability represent additional challenges. 28% of surveyed firms in 2019 thought that access to finance was a factor of concern. In the follow-up survey, 62% of firms (vs. 50% in Italy) failed to honor their financial engagements and small firms recorded the highest incidences of delayed payments.

Entrepreneurship and innovation, which are the cornerstones of private sector dynamism, are starting to flourish in Morocco. Yet, young firms still struggle to raise early-stage financing and the overall financial and advisory support architecture remains complex. Simplifying it could provide entrepreneurs with a straightforward track from ideation to fundraising and operational phases. Workforce qualification, another key asset for private sector dynamism, remains a concern in Morocco in comparison with peer countries (30% of  Moroccan firms identify an inadequately educated workforce as a major constraint versus 20% in MENA) although 38% of firms offer regular formal training to their staff.

The 2019 Enterprise survey also unveiled a revealing figure about a structural challenge that raises transaction costs for Moroccan firms: corruption. 46% of firms identify corruption as a major constraint and 58% of them declared having been expected to offer a backhander to secure a contract with the government. Inefficient business regulations also constitute impediments for firms’ growth and development in Morocco. The proportion of firms identifying business licensing as a major constraint increased to 30% in 2019, from 14% in 2013. Furthermore, 41% of Moroccan firms view tax rates as a major constraint and 23% of them consider labor regulations as a constraint.

Finally, one cannot ignore that the size of the formal sector in Morocco is far overshadowed by sectors linked to the informal economy: 4.3 million households in the country depend on informal activities for their income and livelihoods. At the same time, the lack of dynamism and opportunities in the formal sector are contributing equally to the persistence of the phenomenon.

A silver lining to step up reforms

The Moroccan private sector has the potential to harness the change momentum to set off and maintain innovation and agility deployed in the early stages of the pandemic, where a number of enterprises positioned themselves in productive sectors related to the pandemic response.

The Covid-19 crisis is a critical challenge; however, it also presents a unique window of opportunity for the Moroccan private sector to transform its productive model and boost its competitiveness. Some critical positioning opportunities for Morocco emerge in the current context:

Global value chains: The limits to the “balkanization" trend of global value chains seen in the past, i.e., an increased fragmentation, will need to be reexamined after the crisis. This will require multinational corporations to rewire and localize their value chains to alleviate the impact of future shocks. This provides a unique opportunity for the Moroccan private sector to progress along global value chains. And to position Morocco as a green and sustainable industrial platform connecting Africa  and Europe.

Access to finance: Financing for MSMEs relies mainly on banks. Today, private equity and capital market solutions could be leveraged to enable well-performing companies to raise capital from private and institutional investors, especially in the aftermath of the crisis, when banks have offered large credits to companies to address their pressing need for liquidity.

Integrating the informal economy: It is imperative to ensure a progressive integration of informal enterprises into the formal sector through adequate fiscal measures and a facilitated and less costly access to financing. Effectively reducing informality, though, will require a multi-faceted approach, including  structural private sector reforms like those mentioned here, but also a broad and prolonged investment in building human capital in the country. For large parts of the informal sector, especially the many dependent on low productivity jobs, often in self-employment in urban and rural areas alike, improving welfare within the informal sector through financial and digital inclusion as well as basic skill building, will be core for improving their welfare.

Generating value: Strengthening the link between Foreign Direct Investments (FDIs) and the growth of domestic SMEs is essential to generate spillovers beyond the fast-growing flagship sectors (such as automotive and aerospace).

As the country engages in a new phase, crafting a future Morocco with promising pathways for development in a post-Covid era, the country can turn a new page to increase its private sector potential and strategically position the country in productive and high-value industrial chains.