This is a repost of the interview with Elisabetta Capannelli, the World Bank Country Manager for Croatia, first published in the print edition of "Večernji list"on October 22, 2020.

Improving the efficiency of Croatia’s justice system, improving the effectiveness of Croatia’s public administration through streamlining administrative processes and reducing red tape and investing in education, research, development and innovation are crucial, yet not the only areas that need to be urgently reformed to improve the business environment and increase trust in Croatia’s public institutions, says Elisabetta Capannelli, World Bank Country Manager for Croatia. In an interview for Večernji list she analyzes the goals of the draft version of the National Development Strategy 2030, a strategy that World Bank experts were engaged to work on as consultants and cautions that growth cannot be the only objective. “But what is economic growth without equity, and fairness, and voice and democracy. Growth cannot be the only policy objective. Improving welfare is a prerequisite but it alone it is not sufficient to achieve shared prosperity and better quality of life,” deems E. Capannelli.

The Government of Prime Minister Andrej Plenković has been preparing the National Development Strategy 2030 (NDS) for several years. This is the first ten-year strategic document for Croatia, and is pending a public discussion in the next couple of weeks. The preparation of a strategy for the next decade is common practice for EU members at the beginning of a decade and government rely on these documents for future initiatives. The key advisor on Croatia’s first ten-year strategy was the World Bank. Elisabetta Capannelli, World Bank Country Manager, for the first time, explains in detail, what one hundred World Bank consultants worked on and what Croatia should do to get out of the low growth trap.

Večernji list: What will the Strategy bring us? Can we expect a positive turn in the next decade?

Elisabetta Capannelli: Allow me first to clarify the World Bank’s role in the process of preparation of the NDS. Over the last two and a half years, the WB has been supporting the Government of Croatia in the preparation of its first National Development Strategy as well as on developing the capacity of the Croatian administration to undertake strategic planning. We have employed more than 100 international and Croatian staff and consultants during this time, to facilitate an intense bottom up exercise led by the Ministry of Regional Development. The WB has also produced a very large number of policy notes, ranging from Agriculture, Transport and Energy to Justice, Health, Education and Public administration, all of which will be feeding in the preparation of the EU’s next multiannual financial framework for 2020-27, in addition to the preparation of the NDS. 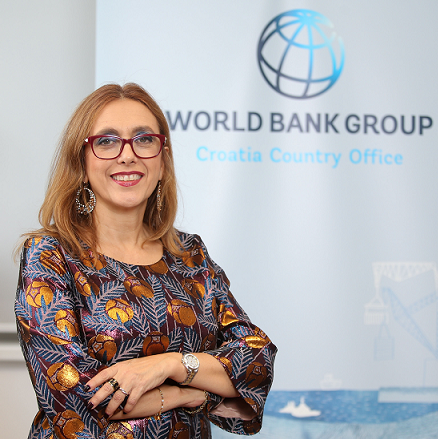 Based on such work, the Government has then written a series of strategic documents, which we have commented upon at various stages, outlining its development vision of where Croatia should be in ten years. The NDS, which in its very final version I have not read yet as it is in Croatian and not yet published, reflects the Country’s own preferences and is fully owned by the Government.

On your question of where we can expect Croatia to be in 10 years, I can see that the NDS is clearly aspirational. It has to be. Croatia can converge faster to EU averages but more needs to be done to see Croatia reach stronger and more inclusive economic growth. But not if the policies of the last 10 years continue in the next. Strategies become realities only when they are implemented, and on implementation of good ideas, Croatia does not have a stellar performance. So if the Government, and importantly society as a whole, are truly committed to implement major reforms, then Croatia can truly exit the low growth trap it is in today.

VL: Which reforms need to be implemented first?

EC: Among key reforms let me mention just few that I see as crucial, but my list is much longer than you can cover today: (i) improving the efficiency of Croatia’s justice system. A better, faster and modern judiciary is of paramount importance to improve the business environment and increase trust in Croatia’s public institutions; (ii) improving the effectiveness of Croatia’s public administration through streamlining administrative processes and reducing red tape would also positively affect the quality of public service delivery and facilitate business operation (for this the broad and fast digitalization of all public services is needed); (iii) investing in education (both quality and what is learned and expanding instructional hours is needed) and changing how research, development and innovation is incentivized is needed. I am a believer that Croatia can leapfrog during the next decade, in spite of the additional challenges imposed by the COVID19 crisis, but only with a major turn-around on policy implementation.

VL: Which World Bank’s expert advices would you single out as crucial to achieve the target of 80 percent of the EU's average development level by 2030?

But what is economic growth without equity, and fairness, and voice and democracy. Growth cannot be the only policy objective. Improving welfare is a prerequisite but it alone it is not sufficient to achieve shared prosperity and better quality of life. Living conditions, opportunities for individuals and families, equal access to education and health services, personal safety, and social safety nets all strongly affect well-being. Therefore, reducing Croatia’s current rate of population at risk of poverty and social exclusion standing in 2019 at 23.3 percent should be very high in the list of the Government’s objectives for the next decade. It is for the World Bank.

VL: The impact of the coronavirus pandemic on world trade and the economy is significant, do you see the light at the end of the tunnel, will the COVID-19 bring a turnaround in the structure of the European economy?

EC: The COVID-19 pandemic has sunk the global economy into the deepest recession in eight decades. According to our latest forecasts (Fall 2020 issue of the ECA Economic Update: COVID-19 and Human Capital) the global economy will shrink by 5.2% this year, representing the deepest recession since the Second World War. In Europe output collapsed by 14% yoy in the second quarter of 2020. The economies hardest hit were those with strong trade or value chain linkages and those heavily dependent on tourism and services reliant on person-to-person contact. Uncertainties surrounding the pace of economic recovery remain. We expect economic growth to rebound in 2021, and the large stimulus packages, including EU funds and the recently approved EU economic recovery plan will provide further support to EU countries, but output levels in Europe are not expected to reach pre-crisis levels until 2022 and in some cases maybe even later.

VL: The World Bank is one of the best-informed international institutions on local circumstances. You have been for three years. Where does Croatia do wrong compared to other transition countries?

EC: Clearly compared to other transition economies, Croatia had the war and entered the European Union relatively late. However, after seven years of EU membership and with Croatia’s geographical position and its great natural endowments, there is no reason why we should still dwell on the problems of the past rather than joining the league of the best transition economies. Opportunities need to be seized without hesitation. The digital and green agenda offers extraordinary opportunities to complete Croatia’s transition, and is supported by an unprecedented amount of funds.

Croatia needs to prioritize what it wants to do and focus on implementation. It needs to promote its private sector development, focus on employment of youth and women, and reduce the administrative burden that stifle private sector initiatives and FDI. And should modernize its infrastructure, by investing public funds in key, transformative investments, not just spread funds across multiple initiatives or to maintain inefficient SOEs, geared to ensure political consensus. For this to happen however improving the quality, efficiency and transparency of the public sector is key. The absence of a competent, agile and motivated civil service that commands adequate skills in strategic planning, EU funds and sector knowledge and the excessive role of the state in the economy, also need to be dealt with.

EC: Croatia has a large, untapped, potential to improve its production base in agriculture and make the sector an important employer in rural areas. And yes, the WB supported the Ministry formulate its new National Agriculture and Rural Development Strategy (NARDS), in close consultation with sector stakeholders. The NARDS aspires for the sector to improve productivity, expand competitiveness and strengthen resilience. The agro-ecological diversity of the country plays an important role in enabling this but improving productivity of agriculture alone is not going to solve some of the acute problems the sector faces. Improving the linkages of agricultural producers to markets in Croatia and beyond is needed and so is to expand the short supply chains and target better the large EU funds available support that should aim to focus on green and digital approaches for sustainable agri-food system.

VL: Will we have enough projects and knowledge to make good use of the European funds offered through regular and new programs?

EC: Croatia has an unprecedented amount of EU grants at its disposal including from the new instruments designed to cushion the impact of the Covid-19 crisis - The Next Generation EU.  While this is a historical opportunity for Croatia to build a more resilient economy, the preparation and implementation of post-2020 EU support is going to be extremely challenging. Croatia is not yet ready to respond to this challenge. While keeping in mind the EU objectives to facilitate green and digital transition, Croatian authorities should ensure that the absorption of all EU instruments is meaningful and impactful and as I mentioned above, public investments should be better prioritized and less politicized. In terms of payments under the 2014-2020 period, Croatia is still among the weakest performers in the EU. The complex management and control system which is currently in place for EU funds spending is one of the reasons for such delay. Lessons learned from the ongoing financial period should push the authorities to urgently streamline and simplify all procedures and reduce the administrative burden on the beneficiaries of EU funds, while continuing to strengthen the competencies of people working in the system and prepare a more focused, agile and better prioritized programming period. Without tackling some of the reasons that made absorption difficult, it will not be enough to just design a perfect new plan and program to use EU and national funds.