Job Opportunities for Youth in Kosovo: Two Steps Forward, One Step Back? 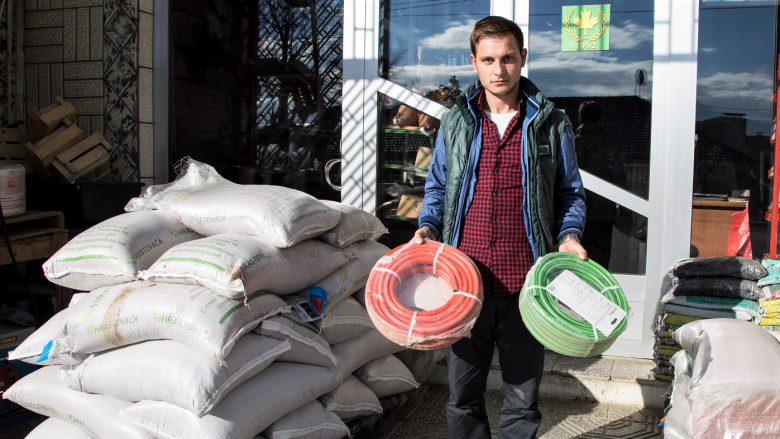 This piece was originally published as part of the Brookings Future Development blog series entitled Job opportunities for youth in Kosovo: 2 steps forward, 1 step back?

For several years in a row, Western Balkan labor market conditions have been improving. Unemployment rates are declining, reaching historic lows in most countries; employment rates are rising; and the gap with EU countries is gradually shrinking. The last year was no different – although job creation slowed, the quality of newly created jobs improved, as found by the forthcoming Western Balkans Labor Market Trends 2019 report. But behind these positive trends fundamental problems persist. The shares of those in vulnerable and informal employment remain elevated, indicating that the quality of employment is still a major concern. Kosovo still faces the greatest challenges. It has taken two steps forward, one step back: Following a steep rise in 2017, employment fell by 4.5 percent in the second quarter of 2018.

Current improvements in the Western Balkan labor markets are most likely cyclical and dependent on the state of European economy, through two main channels. First, and in the context of a relatively strong EU economy, goods and services from the Western Balkans are in higher demand – and this also boosts Western Balkan labor markets. Second, however, this also means that the EU is attracting additional migrant workers, a trend which will only accelerate as the large cohort of baby boomers will retire in the coming years. For the sending countries, such as Kosovo, the “EU pull” reduces the region’s resident labor force and working age population. In this case, the employment rates in the region improve not due to an increase in the numerator, but to a decrease in the denominator. For Kosovo, the only ‘youth bulge’ country, and for Albania, the only country currently reaping ‘demographic dividend’, this is not necessarily a bad thing in the short run. Nevertheless, all countries are increasingly concerned about the effects of accelerated emigration in the region.

The key driver of emigration from the region is low wages. As Branko Milanovic recently calculated, if you fly from Vienna to Belgrade, and if the flight lasts one hour, every 15 minutes you lose 30 percent of your income. Thus, it is far better to fly from Belgrade to Vienna where you get a premium on your income.  Unlike employment and unemployment rates, wages in the Western Balkans are not converging with EU levels. For over half a decade, regional to EU wages have remained at below 40 percent in purchasing power parity (PPP) terms and at as little as below 20 percent in Euros.  If there is some convergence, it is within the region, with wages in Albania and Kosovo catching up somewhat with the rest of the region.

Across the region, the advantages from emigration are strongest in Kosovo, if calculated as wage differential times the probability of finding a (good) job. Youth unemployment is above 50 percent and one quarter of young people (15-24 years) report that they are not in employment, education or training (NEET). Not surprisingly, young women are more likely to identify as NEET (30 percent) than young men. Eight out of 10 employees in Kosovo (including young workers) hold a temporary contract. The difference in average wages among entry level positions in Kosovo and EU countries is staggering: Among young workers (ages 15-29), the highest entry-level wages in Kosovo are obtained in public administration with an annual wage of around 5,000 EUR. The lowest wages are accrued in entry-level positions in commerce, manufacturing, construction, public utilities and agriculture, ranging from 3,000 to 3,700 EUR (based on survey estimates).  In contrast, reported entry position annual wages in IT & Telecommunications are between 30,000 and 44,000 EUR in Austria, Germany, and the UK compared to a broad estimate of 5,000 EUR in Kosovo.  As a result of high unemployment, a lack of good job opportunities, a dissatisfaction with the economic situation at home, but also the “pull” from EU economies, young people continue to leave Kosovo, or contemplate doing so in the near future.  Two recent surveys (Gallup and UNDP) found that around 50-60 percent of young respondents considered leaving Kosovo in the near future, thus potentially depleting the country of its young talent.

Figure 1: Kosovo stands out as the Western Balkan country with the lowest employment and highest unemployment rate among youth (15-24 years old) 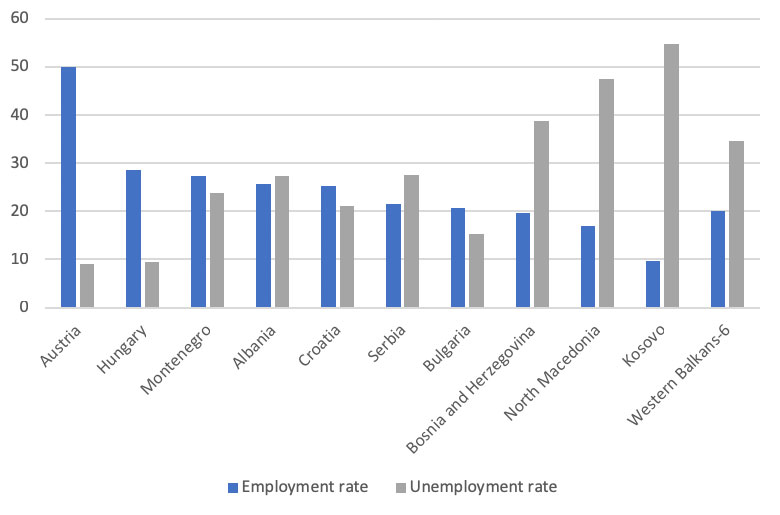 Kosovo has the youngest population in Europe with a median age of 29.5 years, and youth are the country’s great asset. The last decade has seen a significant increase in the number of young people attending university. Finding a good job upon graduation is an important milestone for young people, but the transition to employment in Kosovo often comes with many challenges. Finding solutions to improve educational and employment opportunities for young people is essential to Kosovo’s development. This will require a better understanding of the aspirations of youth and challenges in their transition from education to employment. To that end, if you are a university student in Kosovo, join the national dialogue by speaking up about your goals, hopes and fears related to finding employment.

Stefanie Brodmann is a Senior Economist in the Social Protection and Jobs Global Practice of The World Bank Group. She works on issues related to labor markets, social assistance, education-to-work transition, and labor migration. She holds a doctorate from the Universitat Pompeu Fabra in Barcelona, was a visiting PhD student at Harvard University, and a post-doctoral fellow at Princeton University prior to joining the World Bank in 2009. Her research has been published in the Journal of Income Distribution, International Migration, World Development and the European Sociological Review, among others.

Mihail Arandarenko, Faculty of Economics, University of Belgrade, Serbia, holds a PhD in Economics. He teaches Labor Economics and has published extensively on issues of labor markets, employment policy, political economy and social policy, especially in the context of difficult socio-economic transformation in South Eastern Europe. He is currently a visiting professor at the Graduate Center, City University of New York, and was a visiting senior fellow at the London School of Economics and post-doctoral fellow at Collegium Budapest – Institute for Advanced Study.