We Are a True Partner for Reforms

Croatia needs to address substantial economic, social and institutional weaknesses to boost private sector productivity and competitiveness, raise the quality of human capital and modernize public services. We believe the World Bank plays the key and rather unique role as a partner of Croatia.

While Croatia is finally out of recession and has recorded a solid growth, the pace of this growth is not a guarantee that the country will be in a position catch up to the new member states such as Slovakia soon, or come close to other more developed EU counterparts. In this interview, Elisabetta Capannelli, Country Manager for Croatia and Slovenia, explains what the country needs do to and what role can the World Bank play in helping Croatia to achieve better results.

Diplomacy & Commerce: The World Bank’s country office in Croatia has been very active. What is your focus for this year and what projects can you announce for 2018?

Elisabetta Capannelli: We are at a very important stage of our engagement in the country. We have just completed a new diagnostic analysis of the challenges Croatia is facing and we have recently started preparing a new Country Partnership Framework (CPF) between the Republic of Croatia and the World Bank Group. In essence, the CPF is a document that will guide our strategic engagement and prioritize the program (projects, investment lending operations, technical assistances, advisory work, etc.) we will focus on in Croatia for the next 5-6 years. The Ministry of Finance is our main partner in this process as it will have the leading role in the development of our new strategy but we will also hold consultations about the future role that the Bank should have in Croatia, in addition to many stakeholders, central and local governments, civil society, academia, private sector, and the European Commission.

As far as our ongoing program is concerned, lately we have been deeply engaged with the Ministry of Sea, Transport and Infrastructure (MSTI) and the Ministry of Finance in the restructuring of the Croatian motorway sector. This is an ambitious program of the GoC and a genuine effort is being made to lower the macro fiscal impact of the sector on the economy and to deepen reforms of the state-owned road enterprises, improve their efficiency and performance, and their planning processes to avoid further accumulation of debt. The project is now being successfully implemented. The process of financial optimization is going well, and a 1.275 million EUR sovereign bond has been raised and on-lent to the road companies for refinancing of their existing short-term, expensive loans. A further amount exceeding 1.8 billion EUR of the existing commercial debt is in the final stages of re-negotiation. We are also a partner to the Government in the process of restructuring of the loss-generating railway sector, to again improve the performance, profitability, services and customer’s satisfaction. During 2018 we also expect the Rijeka Gateway Project and the new container at the Zagreb Terminal to be finalized, as well as for the foundation of its road and railway interlinks to have been established and completed.

Our current portfolio amounts to US$487 million.

D&C: What do you see as the biggest obstacles to higher growth in Croatia and what are your recommendations for addressing these specific problems?

EC: Croatia has come a long way after the six-year long recession and is now achieving solid growth rates of just under 3 percent. However, a 3 percent growth, even if sustained, will not bring the country to the desired level of development, and Croatian citizens will take a very long time to reach the average European income and similar economic opportunities. We estimate that, if the growth rate stays at 3 percent, Croatia will catch up to Slovakia’s current per capita income in 9 years and Austria’s in 26 years. If the growth rate slows down to 1.3 percent, which is close to what we and other have estimated as Croatia’s potential growth rate, it would take the country 21 years to catch up with Slovakia or 58 years to catch up with Austria. So, something is not going right. Croatia faces a big challenge in terms of the convergence with the EU and bolstering its very low potential growth rate.

In regard to the solutions, one needs to focus on what to do in order to increase this potential growth, in the context of the demographic and societal challenges in the ageing population and migration flows.

D&C: After your appointment as the Country Manager for Croatia and Slovenia, you have opened a series of relevant issues for Croatia. One of them is the best growth format for Croatia. You have mentioned the Romanian model as one of the possible options. How can this model be implemented in much smaller economies like Croatia’s?

EC:  All countries are constantly searching for the answer as to what is the best growth model for them. There is no standard formula or the perfect model as it depends on natural resources, human capital, location, opportunities. From this perspective, Croatia should be considered lucky and that is the reason why you often hear that Croatia is not using its potential to the maximum. Croatia has also the opportunity to learn from its peers, avoid mistakes others have made before, and apply solutions it thinks would work best in the country’s circumstances. If compared to Romania, Croatia could borrow elements of its recent growth success, such as Romania’s focus on removing barriers to doing business, especially for IT and innovative industries, or tackling reforms in its network industries, like unbundling in the energy sector, and improving corporate governance in state-owned enterprises. Another country to emulate could be Poland, which has been experiencing continuous growth based on the implementation of comprehensive reforms, encouraging the private sector to grow, and being focused on using the EU funds in an efficient way. The Baltic countries are also interesting examples because they have been focusing on competition, improving their business environment, and providing incentives to domestic companies to innovate.

Whichever model Croatia chooses, it is quite clear that the public sector could not be the driving force behind the growth, but rather a much larger, dynamic, innovative private sector able to compete at the European level. This brings us back to the question of productivity. Therefore, what is needed here are committed efforts on boosting the economy’s competitiveness. This requires a comprehensive reform program that will improve the efficiency of the public administration and strengthen public institutions. Other key reforms include improving the rule of law, increasing the flexibility of the labor market, modernizing the education system, fostering competition and creating a friendlier business and investment environment. These reforms could be the tide that lifts the boat, benefiting industry and modern services sectors like IT but also tourism and transport. Only with reforms that will substantially improve competitiveness will Croatia experience higher and more resilient growth.

Croatia has an opportunity and an obligation to not only to compare itself to its EU peers, but also, where possible, to outperform others. I believe this is doable and I remain positive about the country’s opportunities, in addition to its natural beauty. Croatia can achieve this by organizing the state in a way that excels in providing services to its citizens, in the major public service areas, from judiciary and business environment to education and human development. 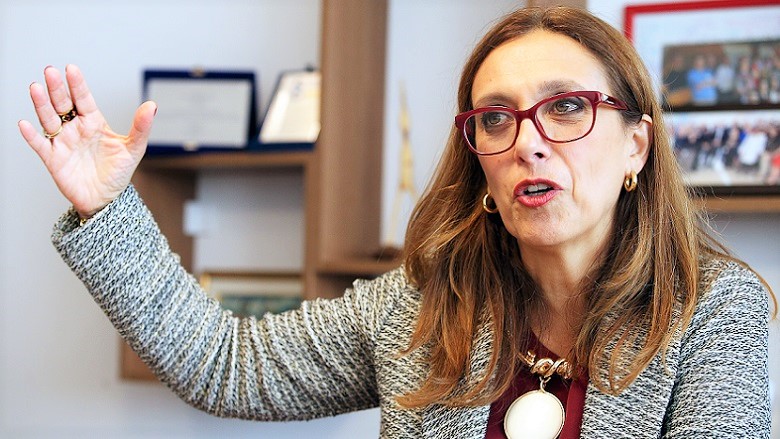 D&C: Tourism is one of the most important industries in Croatia, but it should not be the only driving force behind the country’s economic growth. What is your opinion?

EC: Tourism is and will remain an important sector for the Croatian economy. If everything remains the same tourism will bring in a steady flow of income for years to come. But let us not forget that Croatia has benefited from record high numbers of tourists also due to the volatile situations in the neighborhood and in competitor countries. Tourists, who used to go to Turkey and Egypt for example, are now visiting Croatia and this could change. It is also a well-known fact that this sector is intrinsically less innovative and has fewer positive spillovers on the rest of the economy. So, while it is good to have tourism revenues amounting to 20 percent of GDP, I would encourage Croatia to invest and work harder on developing its private sector and improving its competition policy and not just to focus on few large firms, including state-owned enterprises, which are dominating the economy. We would like to see many more new firms entering and existing in the market and growing as a driving force of the Croatian economy.

D&C: The question that you had raised at the very beginning of the debate about the introduction of euro to Croatia was whether the country had adequate institutions to become a resilient member of the eurozone.

EC: The process for euro adoption is an opportunity to implement deep, needed reforms. The path towards ERMII entry should be used to strengthen institutions, regulatory bodies, the judicial system, and the public administration, so that when the euro is adopted the economy is strong enough to succeed in the euro area. We would like to see Croatia’s institutions become resilient to the shocks that are inevitable in global economic cycles.

D&C: The World Bank considers Croatia as a country that is yet to complete its reforms. Do you think that the society and the government are willing to complete the reforms, and start creating a new growth model?

EC: I would like to use this opportunity to commend the government on the fiscal consolidation efforts with the trend continuing in the positive direction. We hope that the trend will be sustained because Croatia truly has the opportunity to decrease its public debt to 60-65% of GDP by 2020. I have also been encouraged by the direction of reforms in the road sector as mentioned before. We hope to see the same determination by the authorities to transform the railway sector in the next months.

While we are encouraged by the direction of the reforms in some areas, we have not seen much progress in others. The consensus between the private and public sectors, civil society organizations and the government is a key element for achieving fundamental changes. I am not sure that the Croatian society fully realizes the risks it faces by postponing reforms or by privileging and protecting just some powerful interest groups in its society. In our conversations with the authorities we see that there is the understanding about what needs to be done and the hope that relevant activities will be expedited. We, in the World Bank, are available to provide the support for the transformation of society, as well as to support and to protect the vulnerable.