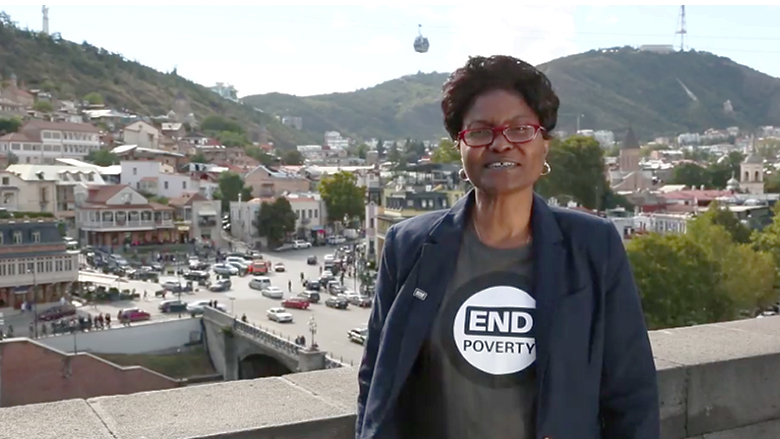 What a coincidence! 2017 not only marks the 25th anniversary of the partnership between the World Bank Group and the three countries of the South Caucasus – Armenia, Azerbaijan and Georgia – but also the 25th anniversary of the declaration of 17 October as the International Day for the Eradication of Poverty. As we mark this important day, I believe it is especially important to take stock of what the South Caucasus has achieved so far, while also looking ahead to see what needs to be accomplished in the coming years.

Two and a half decades of social and economic progress have dramatically changed Armenian, Azerbaijani and Georgian societies. Economic growth has been rapid, and this has translated into strong welfare gains for the population. All three countries have grown from poor, centrally-planned economies at independence to lower middle-income countries today, and living standards have greatly improved for many people. From 2005 to 2015, poverty was cut down to around 20 percent in Armenia and Georgia, and to less than 10 percent in Azerbaijan.

Despite these important gains, however, the South Caucasus countries are yet to reach the stability and resilience of strong middle-class economies.

From analysis of economic mobility in the South Caucasus, we learn that not everyone crossed the poverty line in the same direction: while some households left poverty behind them and continued to do so, others who were previously above the poverty line reversed. For instance, in Armenia, for every two individuals who escaped poverty between 2010 and 2015, one slipped back. In Georgia, we find that about one in eight individuals has remained mired in poverty throughout recent years. And in Azerbaijan, economic slowdown has hit rural areas hard, increasing the number of vulnerable households.

What lies behind this vulnerability to poverty? We know that social assistance and other government programs have served as important safety-nets for the poorest, but although necessary, they are insufficient measures to lift people permanently out of poverty. Rather, as societies develop, it is the quality of their labor that increasingly becomes the main source of income and, at the same time, the main driver of poverty alleviation.

Furthermore, social mobility is not only about increasing income or rising above the poverty line. It is also about people’s perceptions about whether their lives are improving or not. I have been fortunate to meet so many wonderful people as I travel across the South Caucasus. In Georgia, for example, I met a farmer from Napareuli village who benefited from the Kakheti Regional Roads Improvement Project, and he said to me: “We grow cucumbers, tomatoes, onions, garlic, peppers and eggplant. Taking these vegetables to market and selling them is our only source of income. We also have a small vineyard, only for home use, for ourselves. But many farmers in the region mostly grow grapes and take them to market. With the new road, this has also become easier and much faster.”

A parent from Karaleti village, a beneficiary of the Internally Displaced People’s Community Development Project, once told me: “It is very good that we have this play-ground here, because it is safer, and because our children don’t have to cross the busy street. Coming out of your house, you see your children playing in front of it, which is a big consolation.”

So, what about the future? An important policy lesson to take forward is that we must not only continue to lift families and individuals out of poverty; we must also prevent them from falling back into poverty at any time. This means not only providing safety-nets to protect the poorest, but forging ahead with policies that ensure greater investment in people’s education and training, the creation of more and better jobs, and equal opportunities for all members of society.

As the region continues to make gains in economic growth, a brighter future beckons for all the people of the South Caucasus. And we stand resolutely by their side as they strive toward it.

Mercy Tembon is the World Bank's Regional Director for the South Caucasus, based in Georgia.

Blog - On the road in Georgia – through past, present and future