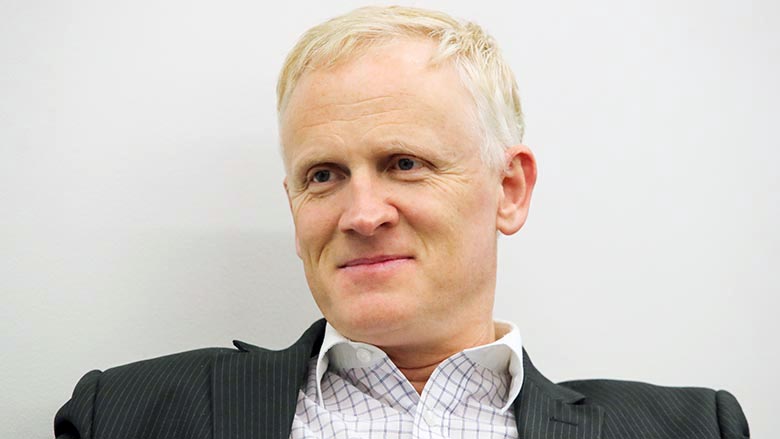 Working in post-Soviet countries is not a novelty for you. You have already headed the Bank's Representative Offices in Moldova, Kyrgyzstan and Turkmenistan. Why, in your opinion, is your work in our country going to be different? In what mood are you starting your work in Belarus?

My first impression of the country is that it is a very cold country, with very warm people. And I think, after previously being in the sunshine of Moldova, that I need to get a bit accustomed to the climate here. I've got a lot of work to do, which I'm really looking forward to doing.

So, we have a lot of work to do, and I'm also looking forward to getting out of my office - to see the country. I've already been so overwhelmed by the hospitality and the kindness of all the people whom I've met since I arrived.

Will your appointment impact the World Bank's approach to the implementation of projects in our country?

Some things will be the same; some things will change. We are still going to be a big investment partner for Belarus. And we've got big projects planned for the district heating sector, for water and sanitation, for universities, and for general education. But at the same time, the need for changes to the way that the economy is managed is getting gradually more urgent.

As you’ve noted, the new Country Partnership Strategy of the World Bank Group for Belarus for 2018-2021 is being drafted. What are the main projects that might be included in the Strategy? What will be the fundamental difference between the new Strategy and the old ones? When is it expected to be adopted?

We think the Strategy will be adopted in March 2018. There would be an ambitious program of lending. On the IFC side (the International Financial Corporation), they will try to increase the volume of investments in the private sector. The World Bank will invest in higher education, in general education, in water and sanitation, and in district heating. And with all of these investments, our aim is to improve the living standards of ordinary Belarusians.

And, we believe that Belarus has a really magnificent record of economic and social achievements over the last 15 years. But without change this will not continue. If Belarusians are to continue on this path towards prosperity, it has to come from productivity rather than from subsidies and borrowing.

So, in short, the best way to preserve and conserve the achievements of the past is to change things for the future. We would be providing a lot of advice to the government on how to manage the economy so that it becomes an attractive place for private and public employers to raise productivity, to create jobs.

You’ve mentioned several times that educational projects are planned in the future. How exactly does the World Bank plan to invest in the Belarusian education system? And why do you want to do this?

Last week, I looked at a survey that the World Bank carried out on enterprises in 2013. Every single type of enterprise (small, medium or large) - they all said that the shortage of skills in the labor market was one of the top constraints upon creating new jobs. So, at the government's request, we have agreed to finance a higher education project. It is still being designed, but maybe it could help Belarus to adjust the content of university training to be more relevant to the demands of the labor market.

And Belarus has recently taken a great step: it has become a member of the Bologna Process, which is an international framework for improving university education. So, the World Bank could help Belarus to realize its commitments under the Bologna Process and to modernize its university systems in accordance with these international standards. This program will get started in 2019.

The World Bank actively supports SME development in Belarus. In particular, the World Bank has recently allocated $60 million to the Development Bank of Belarus to support small- and medium-sized businesses. In your opinion, why is this so important for the economy of our country? Does the World Bank plan to implement new SME-supported projects in the near future?

Today, Belarus has an improved regulatory framework. Now, our country is adopting a portfolio of regulatory documents to liberalize its business environment. Are you familiar with the documents, and what is your evaluation of them?

We have seen the draft; we think that it is moving the country in the right direction. However, regulations are one thing, and good implementation and enforcement is another. I think that a really positive thing is that this package of documents is a very encouraging statement that the authorities take private sector development seriously. The next step is to implement and enforce these rules correctly.

Belarus has significantly improved its Doing Business ranking recently. How does the World Bank assess the incremental progress of our country in the ranking? Will this boost investments in the economy of Belarus, and attract new investors to the country?

Belarus should really be proud of the spectacular improvements in its Doing Business ranking. It's up in the club of the European Union countries now. If you actually look at the Doing Business report, it says very clearly: these ratings are about rules, but what really matters is how these rules are implemented and enforced. So, I would say to Belarus: your ratings in Doing Business are absolutely fine; now, let's focus on implementing and enforcing the rules, so that investors feel secure.

Currently, the World Bank investment portfolio for Belarus has nine projects in various sectors, totalling $991 million. What are your plans to implement projects in the social sector of our country, and in health care in particular?

The Ministry of Health is just beginning to implement a program with our financing. And this will finance simulation centers in institutions training medical specialists around the country, so that doctors can practice different procedures on virtual patients. And we will also help the Ministry of Health to enable the nationwide rollout of an e-Health system to facilitate diagnosis of illness, and follow-up of patient well-being, for example.

But, actually, the project that excites me the most is a very little one that probably nobody has heard of. We have a very enthusiastic and dedicated team that has been invited to advise the government on how to discourage smoking. Now, it's great to have a modern health system, but if people have unhealthy lifestyles, especially men, all the medicine in the world is not going to make them healthy.

How much is planned to invest in the Health Ministry project?

We plan to invest $125 million dollars. But I never like to say the amounts of projects, because what is much more important than our financing is what Belarus is going to do itself.

Will you continue investing in transport infrastructure development in Belarus? Should we expect new projects to come?

We are not planning any big new investments in the transport sector. But, we are very excited to see the recent increase in activities of the European Investment Bank and the European Bank for Reconstruction and Development. Belarus now has many other sources of financing for transport infrastructure.

But let's face it: the infrastructure needs of Belarus, like almost every country in the world, are much more than the resources of the government or of international institutions like the World Bank. The long-term solution is to get private investors into sectors like roads and railways. And, more and more, the role of the World Bank Group will be as a pioneer in difficult sectors, so that other investors can come in behind us. That's our vision.

At the beginning of our conversation, you mentioned that you would like to leave the office and see the country. Where will you go first?