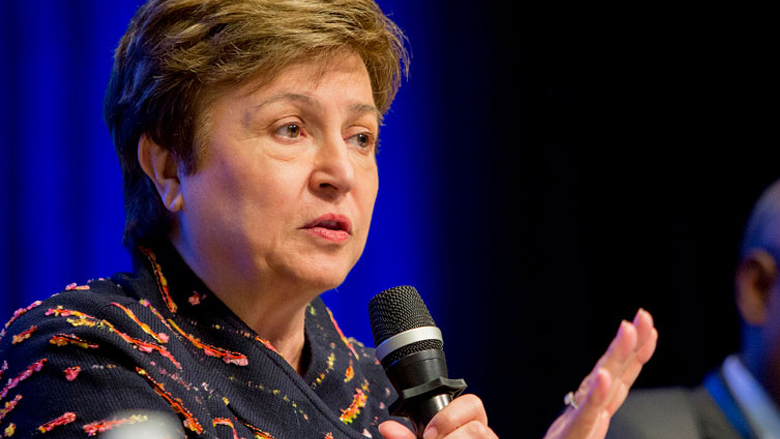 LE FIGARO. - France and the World Bank will organize a joint conference in Paris in December on climate change, what is the purpose?

Kristalina GEORGIEVA. - We have a long tradition of cooperation with France. Two years after the Paris agreement, there is a need to strengthen the political momentum that was generated  in 2015 at COP21. The message is clear: On one hand, we must convince the states that transforming their economies to carbon-free economies is possible, on the other hand, the private sector must be further mobilized to respond to the climate-investment needs, particularly in the least developed countries.

We are the first generation to suffer the consequences of climate change and the last one to be able to do something to change its course.

Can climate change make poverty worse in the world?

No one is spared by global warming, but the threat is particularly acute in the poorest countries. Natural disasters that previously only occurred every ten to fifteen years now have frequencies of two to three years. The World Bank has calculated that if we do not succeed in altering climate trends, extreme poverty will strike an additional 100 million people by 2030, and this will of course result in considerable population movements.

There is a need to act immediately and strongly and to help developing countries adapt their infrastructure. And at the same time they must be able to change their agricultural methods.

How will the World Bank help?

In recent years, our funding for climate-related projects has reached $ 10 billion per year on average. By 2020, we intend to devote 28% of our financial resources to it. The Bank also sees itself as a laboratory of innovation where countries can exchange experiences. For many years, we have been working with China to restore lands that have been damaged. And now the solutions found are transferred to Africa.

Fragility, conflict and violence affect how many people in the world today?

We estimate that around 500 million people live in "fragile" countries. Many are in Africa, but also in Latin America like Haiti, and in the Middle East, Iraq, Syria and Libya. We see that fragility is often linked to climate  change but also to armed conflicts.

What is the link between climate change, conflict and migration?

In sub-Saharan Africa, the link can be seen both in urban areas affected by hurricanes and floods, and in rural areas where climate change forces farmers to abandon traditional land, while farmers can no longer rely on large livestock. These changes are a source of conflict and migration. This link has been identified but not yet quantified.

We can see it in In Syria too, the start of the conflict coincided with a drought that pushed the rural populations towards the cities. The same is true in northern Mali where land degradation has made people vulnerable and fueled political instability.

The UN estimates that more than 65 million people have been displaced, 21 million of which are refugees, a historic record. Could this figure grow even further?

Yes, this is highly possible. On the one hand, as a result of climate change, more and more regions have seen their land degraded. On the other hand, conflicts have changed in nature. Boko Haram in Africa and Daech in the Middle East are ultraviolent groups that only aim to create instability. This leads to increasingly long-term conflicts and intense humanitarian crises that are accompanied by the despair of the populations.

As a financial aid organization, what can the World Bank do?

Whether global warming, armed conflicts or migration, these phenomena are linked to economic underdevelopment, a problem that comes under our mission. We are thus increasingly working in cooperation with international humanitarian organizations like the WHO, UNICEF, the Red Cross and non-governmental organizations. This is particularly the case in Afghanistan, Mali and Yemen.

In Yemen, the Bank has just granted an emergency loan of 200 million dollars to fight cholera ...

Yemen has been in conflict for a long time. In addition, drought has led to famine worsening the conditions of war. And now cholera is striking 500,000 people, with thousands of deaths. There was an urgent need to treat this disease, which should be easily treatable and which if left untreated could lead to an appalling humanitarian crisis affecting most of its population of over 27.5 million. Partners such as the UNICEF and WHO have increased their presence and our financial support is aimed in particular at improving the water supply.

Traditionally, the World Bank helped countries rebuild after a conflict. You now intervene in countries at war?

Indeed, the World Bank Group was created for the reconstruction of European countries in the aftermath of the Second World War. But for all the reasons I have indicated, we have to intervene in countries at war alongside the humanitarian organizations themselves. This is a profound but necessary change. We must adapt to the new world conditions!

Is the separation between economic migrants and political refugees as clear as it seems, or are they both the consequence of lack of economic development?

Of course, we can say that the problems of underdevelopment are at the root of conflict and migration. But I do consider that it is absolutely necessary to distinguish the two phenomena. The economic migrant seeks to leave for economic reasons, to improve his quality of life, it is a voluntary decision. Political refugees, or more generally all those who have been forcibly displaced, have done so against their will, often  fleeing war or conflict. That is why we have to support neighboring countries such as Lebanon, Jordan, Uganda and Ethiopia, which have welcomed refugees in great numbers. These people have no other wish but to return to their country of origin or stay as close as possible.