No Urban Myth: Building Inclusive and Sustainable Cities in the Pandemic Recovery

By: Somik Lall and Sameh Wahba

A journey to economic development

For over 100 years, line 7 on the New York City subway has connected middle-class Jackson Heights, Elmhurst, and Corona in Queens with Manhattan’s Midtown and wealthy West Side. In normal times, the 7 train brings 500,000 commuters to work every day in New York’s large and diverse labor market. A 24-minute ride from 74th Street Roosevelt Avenue in Jackson Heights to Times Square connects neighborhoods that are $78,000 apart in annual median incomes. Riding the 7 is a journey to economic development.

The coronavirus pandemic (COVID-19) has ground the city to a halt since March, with stay-at-home orders in place amid rising infections and deaths. Heavy attention has focused on the downsides of New York City’s density, with images of patients lined up for blocks outside Elmhurst Hospital, overwhelmed with COVID-19 cases, ingrained in the minds of millions worldwide. The ills of density have dominated popular and policy conversations around COVID-19 as cities worldwide struggle to flatten the curve and limit contagion.

Below the elevated 7 line, the crowded and bustling immigrant neighborhood of Jackson Heights, home to saree shops and samosa chaat reminiscent of Karol Bagh in New Delhi, is now the neighborhood worst affected (see map 1a) by the virus. COVID-19 cases are as high as 4,125 per 100,000 residents in the local 11368 zip code.[2] At the other end of the 7, in the wealthier Chelsea 10011 zip code, cases are much lower, at 925 per 100,000 residents. While this picture may be what you expect—dense neighborhoods are most at risk of contagion—the evidence tells us something completely different. 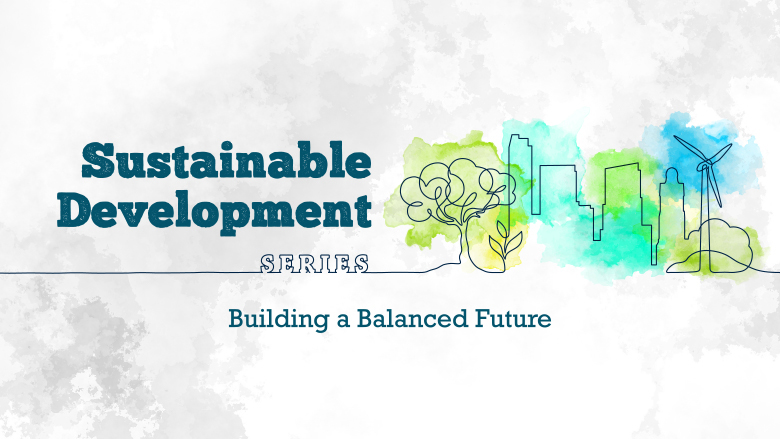 What makes a difference is neighborhood income and associated characteristics, which temper the extent to which complementary investments in structures (i.e., housing), infrastructure, and amenities transform places from being overcrowded to being dense and livable. At the economic heart of the city, land is more valuable in Chelsea. With efficient planning and land development regulations, developers have the incentive to build tall structures and create a lot of floor space (see map 2). 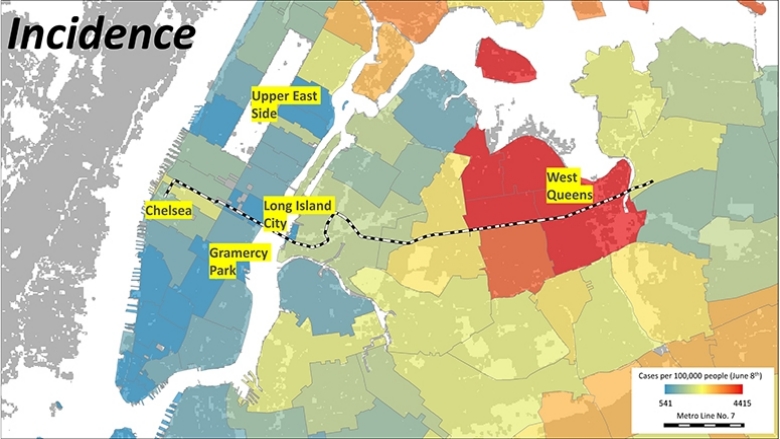 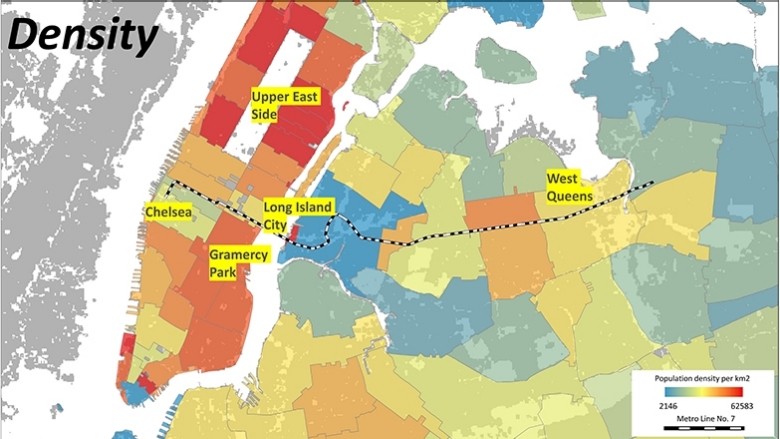 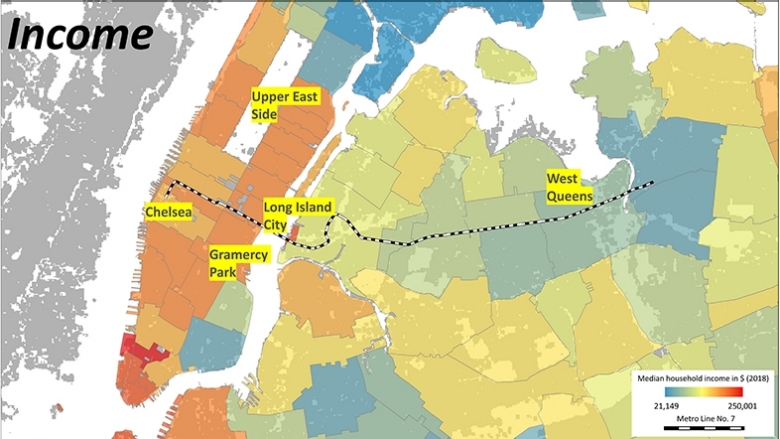 In lower-income neighborhoods, developers do not have the incentive to add on floor space or to demand additional infrastructure improvements. Especially in New York City, people live in more cramped quarters, often in multi-generational families, and have jobs that necessitate face-to-face interaction. The risk of contagion increases as neighborhoods lack the physical structures and amenities that enhance livability, and where residents have no option but to go out every day in search of employment or services. It comes down to this: economic geography, not physical geography, determines contagion risk. Saying otherwise is an urban myth.

Figure 1: COVID-19 incidence and density do not go hand in hand across New York City; incomes and density are correlated 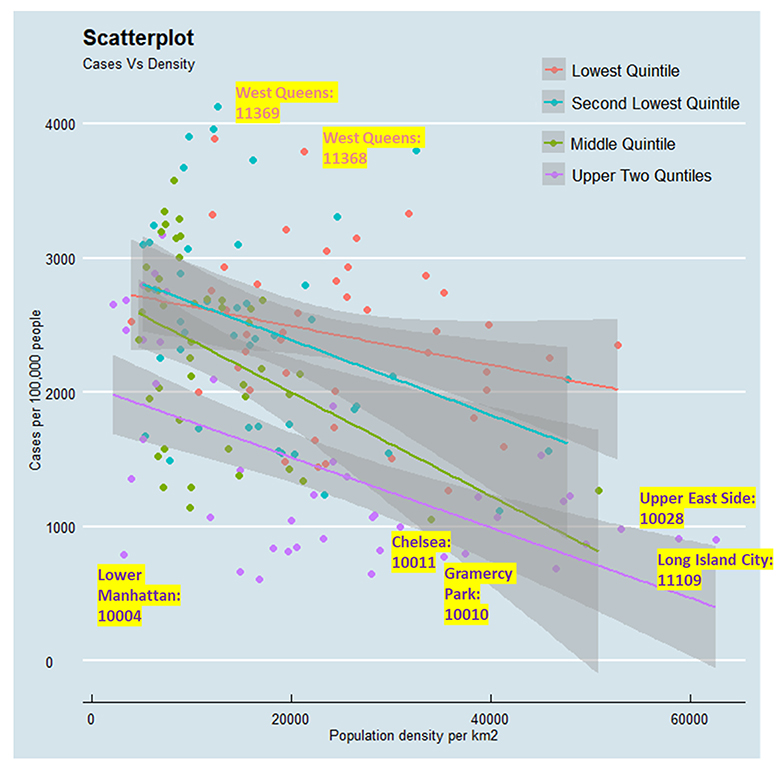 As in New York, stark differences in economic geography have been associated with COVID-19 cases across the world. Developing cities such as Cairo, Mumbai, Manila, and Nairobi are seeing large-scale lockdowns—applied and enforced with varying degrees of success—to contain the spread of the coronavirus and help their health systems cope. A major concern is economic geography: a large share of city residents in Africa and Asia live in slums and informal settlements, where cramped living conditions and inadequate public services, especially water and sanitation, can exacerbate contagion. In Dar es Salaam, 28% of residents live at least three to a room; 50% of Abidjan is overcrowded. Residents lack open space and suffer from inadequate infrastructure, sharing taps and latrines, often with 200 people per communal facility. In South Africa, only 44% of people have access to water inside their house and only 61% have access to a flush toilet. It’s urgent to save lives and protect the livelihoods of the poor and vulnerable, many of whom live in slums and informal settlements. Even under lockdown, given limited floor space and the need to cluster around public amenities such as communal toilets and taps, people in such settings cannot maintain safe physical distances from one another.

To respond to the emerging crisis in developing cities, at the World Bank we have developed a methodology that can help city leaders direct medical and other critical resources to potential “hotspots,” the places with highest exposure and contagion risk. We employ an economic geography lens, accounting for investments in structures, availability of public services, and likelihood of contagion.

We developed this methodology in April 2020 with the aim of rapidly deploying it based on three globally sourced datasets that reveal population density, available floor area, and access to basic services such as taps and toilets. [3] Combined, these tell us where and how people live. Data on where people live come from WorldPop and Facebook, and data on key services are accessed through Open Street Map (OSM). The density and floor space data are available for 100m x 100m grids, giving us fine-grained information at the sub-neighborhood level. We also partnered with the German Aerospace Center (DLR) to access their innovative World Settlement Footprint 3D product (WSF-3D), which provides information on the height of buildings, making it possible to estimate floor area available in a given building.

As we saw along the line 7 subway in New York, adequate floor space can make high density livable, whereas insufficient floor space can make even moderate densities crowded and unlivable. In Mumbai, the slums of Dharavi face a triple challenge of extremely high population density, very limited floor space, and a scarcity of infrastructure, public space, and amenities. It is mind-boggling to think of the contagion risk presented by 68,400 people packed together on 1 sq km of land without taps or toilets at home. Our hotspots methodology predicts that 5.2 million people in Mumbai are at risk of infection, even with lockdown measures in place. Figure 2 shows Mumbai’s containment zones as of May 9, overlaid with predicted hotspots. Containment zones are identified based on the number of active cases where stringent measures are taken to prevent contagion. Over 30% of the current zones are located in the predicted hotspots, with considerable coincidence in Dharavi’s crowded settlements. It is likely that higher prevalence of testing in many developing cities, especially in underprivileged neighborhoods, would improve match rates and more accurately predict infection. 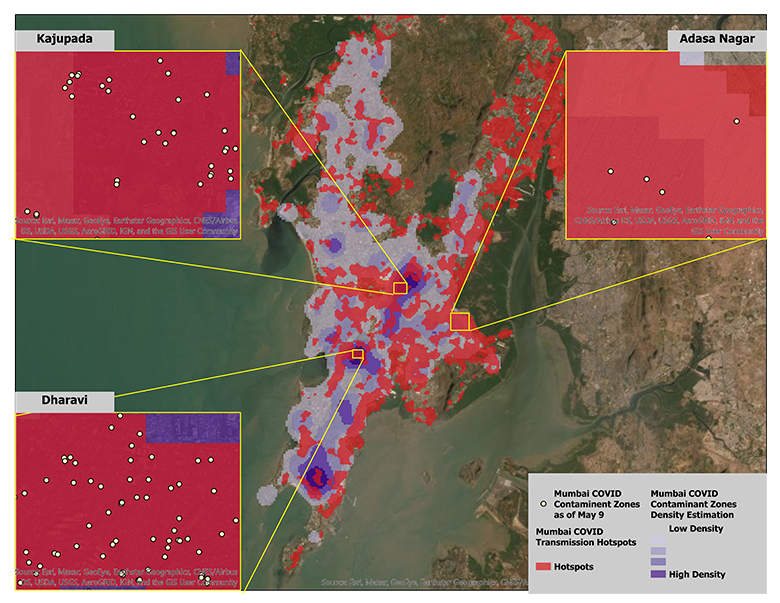 We have identified hotspots in 15 developing cities to support city-led efforts to manage contagion and protect the vulnerable. We plan to extend this to another 30 cities.

Figure 3 shows that 25% of Cairo’s population is at risk of being infected, even with limits to social interaction. In Kinshasa, 84% of the population is at risk. These hotspot assessments can be helpful to city leaders who are at the vanguard of early response efforts.

Many of the city-led responses have focused on two areas: providing basic services including water, sanitation, hygiene, and nutrition, and improving coronavirus-related communications and coping strategies. Jakarta has been retrofitting its informal kampungs with low-cost public water containers and soap dispensers as part of a community awareness program. In Monrovia, Liberia, the Cities Alliance has been supporting outreach in informal settlements to raise awareness about basic hygiene measures and waste management. Rwanda’s capital, Kigali, has been providing portable sinks for handwashing at bus stops, restaurants, banks, and shops. Similar measures have been implemented in many cities around the world.

Our ongoing engagements with cities show that the hotspot approach works. In Egypt, hotspot maps have led the national COVID-19 inter-ministerial committee to discuss developing a spatially differentiated risk management approach for the Cairo metropolitan area. In the Democratic Republic of Congo, Kinshasa is harnessing predicted hotspots to develop a vulnerability index for spatially targeting emergency cash transfers through the government’s multi-sectoral COVID response plan. In the Philippines, these hotspots are helping Manila’s city officials identify ideas in most urgent need of emergency support, such as provision of clean water.

Figure 3: Predicting COVID-19 hotspots to help cities save lives and protect the vulnerable 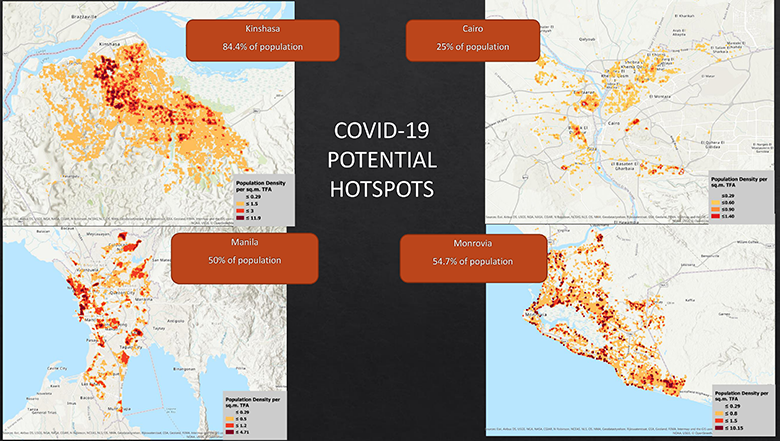 More broadly, there is a strong correlation between poverty and poor living conditions, such as in slums and informal settlements in developing country cities. In countries and regions where cadastres of the poor and vulnerable households are incomplete and where targeting approaches through means-based testing is not feasible, geographic targeting using these hotspots can provide a reliable proxy and help cities target emergency efforts towards the vulnerable.

Reshaping density to build back better

The COVID-19 pandemic has put social and spatial disparities within cities under a magnifying lens like never before. Cramped and crowded neighborhoods that are home to the working class and poor—much of New York’s Queens, Mumbai’s Dharavi, or other cities’ housing dormitories for migrant workers—have shouldered an outsized burden of infections and lost livelihoods. As countries emerge from the pandemic, there is an urgent need to help cities reshape their economic densities and make their urban fabric socially inclusive and environmentally sustainable.

Here are five practical steps that city leaders can take.

BLOG: Yes, cities will survive COVID-19. But they must manage their economic geography

[1] We are grateful to Richard Damania for helpful comments. We thank Gaurav Bhardwaj and Hogeun Park for support with the data analysis.

[3] While we use global data, we are starting work with community organizations through the “Know Your City” global campaign of Slum Dwellers International (SDI), United Cities and Local Governments of Africa (UCLG-A), and Cities Alliance to validate the ‘hotspots’ and improve accuracy of prediction.