Starting a business in Thailand had not been easy until 2017. The requirements to obtain a company’s seal are now abolished, the need for approval of company work regulations from the government has been eliminated, and the process for getting electricity and improved land reliability has been streamlined.

As a result, the time needed to start a business has been reduced to just 4.5 days, compared to 27.5 days in previous years.

With eight reforms in the past year, Thailand has become among the top 10 improvers in the World Bank Group's ease of doing business ranking report, based on reforms undertaken.

WHAT IS "DOING BUSINESS"?

Doing Business is a project that provides objective measures of business regulations and their enforcement across 190 economies. It looks at domestic small and medium-size companies and measures the regulations applying to them through their life cycle.

By gathering and analyzing comprehensive quantitative data to compare business regulation environments across economies and over time, ; offers measurable benchmarks for reform; and serves as a resource for policymakers, academics, journalists, private sector researchers and others interested in the business climate of each economy. 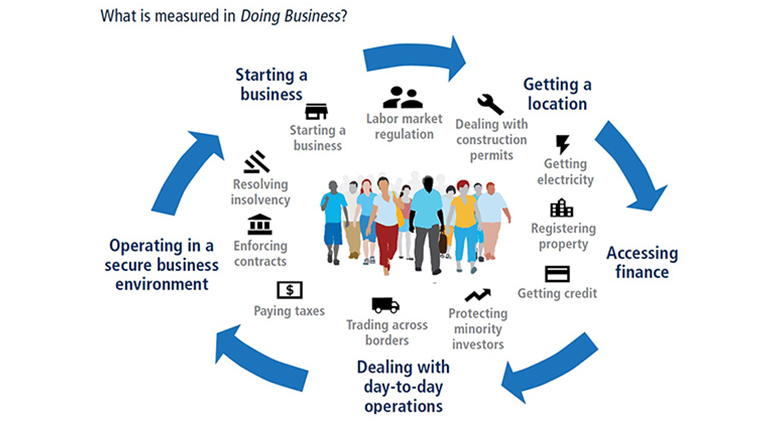 In addition, Doing Business offers detailed subnational reports, which exhaustively cover business regulation and reform in different cities and regions within a nation. These reports provide data on the ease of doing business, rank each location, and recommend reforms to improve performance in each of the indicator areas. Selected cities can compare their business regulations with other cities in the economy or region and with the 190 economies that the global Doing Business has ranked.

"Job creation is one of the transformational gains that countries and communities can achieve when the private sector is allowed to flourish. Fair, efficient and transparent rules, which Doing Business promotes, improve governance and tackle corruption."
Kristalina Georgieva
World Bank Chief Executive Officer

HOW IT ALL STARTED

which happened simultaneously in the late 1980s and early 1990s, said Simeon Djankov, the creator of the Doing Business series and former Deputy Prime Minister and Minister of Finance of Bulgaria.

One was exemplified by Peruvian economist, Hernando de Soto, known for his work on the informal economy and on the importance of business and property rights. In his book The Other Path, published in Spanish in 1989, de Soto makes the point that the prohibitively high cost of establishing a business in his home country of Peru, economic opportunities to the poor were denied. As a result, they end up operating outside the formal economy.

“That was one motivation of the observation,” Djankov added. “If you make it easier for business by simplifying laws and regulations, many more firms and entrepreneurs will switch to the formal sector.”

In the formal sector, he said, workers will have benefits like social security, pension and insurance coverage. At the same time, the government benefits because it will get taxes through which health and education budgets can be replenished.

Second, with the collapse of communism after the Berlin Wall fell in 1989, new questions ascended. Many countries in Eastern and Central Europe and the former Soviet Union were running the economy as a state-owned economy. As a result, they did not think about how do you actually establish laws and regulations for small domestic private business to develop.

At that point when Doing Business was being considered in the late 1990s in the World Bank, there was a big discussion about whether the private sector can generate jobs at all, or the private sector is actually for small tiny firms and it's just the state sector generating jobs.

“At that time 20 years ago, having to make that point that yes, if the private sector has simplified regulations it can actually be a generator of jobs and innovation. So, we helped establish that literature.” He added.

The Doing Business report was then established with five sets of indicators for 133 economies.

This year marks the 15th Doing Business report. Since the inception of the project in 2003, the global business regulatory environment has changed dramatically. Governments around the world have embraced and nurtured advances in information technology to reduce bureaucratic hurdles and increase transparency.

Marking its 15th anniversary, the report notes that 3,188 business reforms have been carried out since it began monitoring the ease of doing business for domestic small and medium enterprises around the world.

“Job creation is one of the transformational gains that countries and communities can achieve when the private sector is allowed to flourish. Fair, efficient and transparent rules, which Doing Business promotes, improve governance and tackle corruption,” said World Bank Chief Executive Officer Kristalina Georgieva.

, with Sub-Saharan Africa implementing 83 reforms, a record for a second consecutive year for the region, and South Asia implementing a record 20 reforms. A large number of reforms centered on improving access to credit and registering a new business, with 38 reforms each, as well as facilitating cross border trade, with 33 reforms.

This year’s top 10 improvers, based on reforms undertaken, are Brunei Darussalam (for a second consecutive year); Thailand; Malawi; Kosovo; India; Uzbekistan; Zambia; Nigeria; Djibouti; and El Salvador. For the first time, the group of top 10 improvers includes economies of all income levels and sizes, with half being top improvers for the first time – El Salvador, India, Malawi, Nigeria, and Thailand. 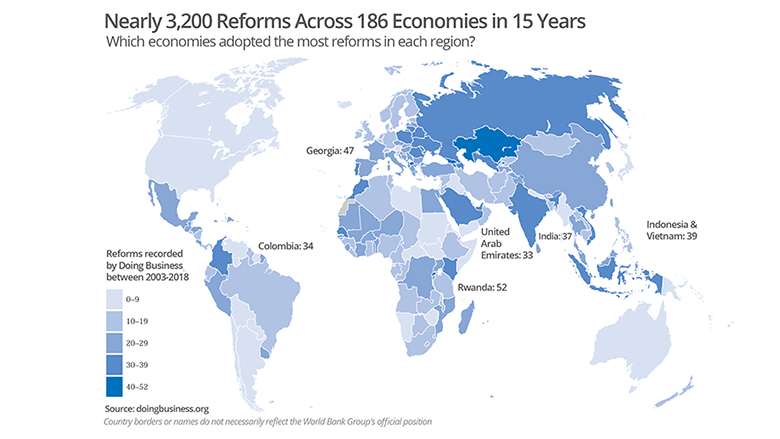 “As we celebrate the 15th anniversary of Doing Business, it is particularly gratifying to see that many of the reforms are being carried out in economies and sectors where they are most needed. We look forward to continuing to shine a light on the real hurdles faced by entrepreneurs, both women and men, and celebrating policy change successes,” said Rita Ramalho, Acting Director of the World Bank’s Global Indicators Group, which produces the report.

WHERE IS BUSINESS REGULATION BETTER? 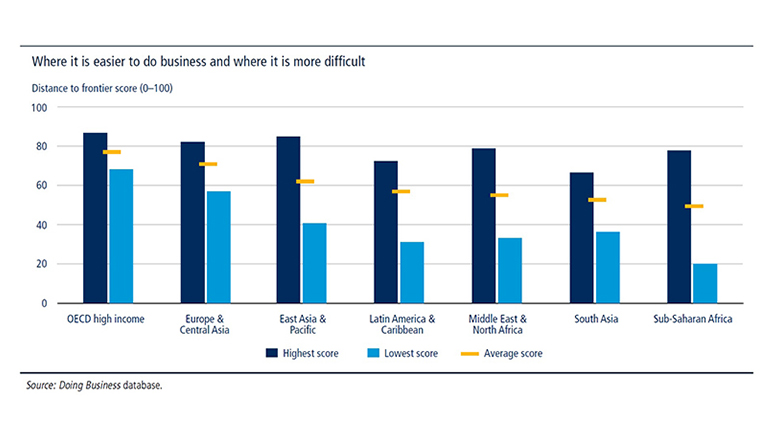 Many factors explain poverty. These can include vulnerability to natural disasters, remoteness and quality of governance etc. Reforming in the areas measured by Doing Business can be particularly beneficial to employment creation when those reforms take place in the areas of starting a business and labor market regulation.

Across economies there is a significant positive association between employment growth and the distance to frontier score. While this result shows an association, and cannot be interpreted in a causal fashion, it is reassuring to see that economies with better business regulation, as measured by Doing Business, also tend to be the economies that are creating more job opportunities.

When it comes to unemployment, the expected opposite result is evident. 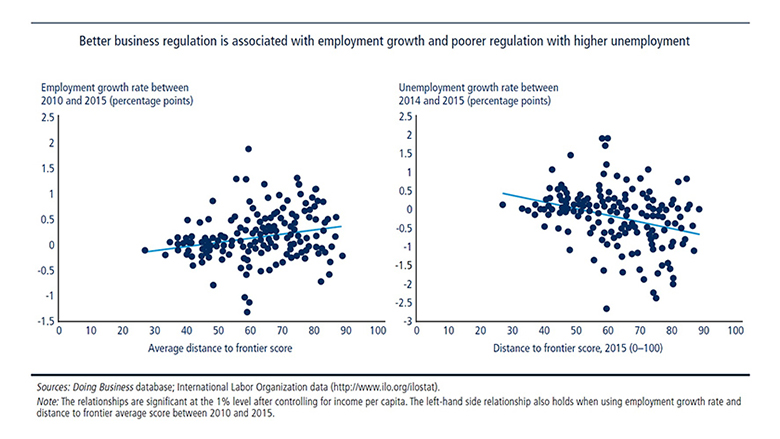 Throughout the 15 years of Doing Business, Djankov said that the biggest impact is that countries would compete on it. “That’s a component that in a way that most of our analytical and theoretical work we hadn’t thought of.”

He added that in addition to good policy, once you start ranking countries and comparing them, natural competition like a “World Cup” or the “Olympics” comes about.