Impact of COVID-19 on adolescents’ learning and enrollment in Punjab, Pakistan: Insights from SMS Girl Data 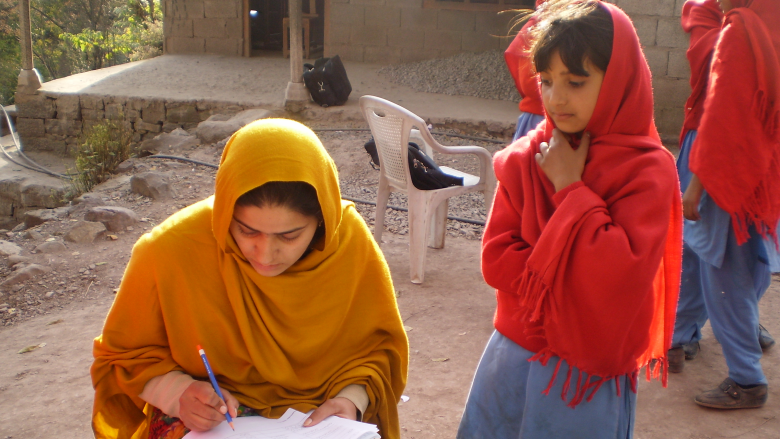 “At times, I would consider dropping out of school and learning a skill to reduce my mother’s stress about meeting my educational expenses.” – Maryum, a high-achieving female student from a government-run school in urban Punjab

Maryum is one of the many students in Pakistan who have struggled to continue learning during the COVID-19 pandemic. Since March 2020, schools have closed and re-opened in various stages. In total, school closures in Punjab have lasted about 10.5 months, disrupting the education of nearly 14 million girls and boys in Punjab in long lasting ways. Initial estimates suggest that students have suffered substantial learning losses and that close to a million students in Pakistan will not return to school, as a result of economic hardships during the pandemic. This has compounded a learning crisis that existed before the pandemic, with a high percentage of children out of school and only one in four children in Pakistan learning to read by age 10.

Drawing on household surveys and qualitative interviews, the impact of school closures is explored in the World Bank’s latest briefs on the pandemic’s gendered impacts on adolescents in the province of Punjab. 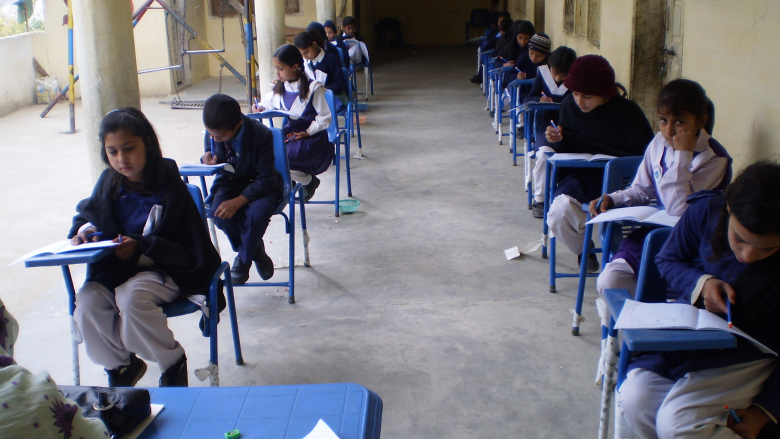 What have we learned?

The most alarming finding is that adolescents are dropping out at much higher levels than initially suggested. It was also discovered that adolescent boys are dropping out at much higher rates than adolescent girls. Eight percent of adolescent girls and 21 percent of adolescent boys are no longer in school. Triangulating these figures with national survey data[1] presents a similar picture, with about 10 percent of adolescent students not returning to school by June 2021. Financial difficulties are the most important reason for pulling children out of school cited by families and are most likely the reason there are higher drop-outs among boys, who typically have more opportunities to generate income for families. Other frequently cited reasons by parents are that children may not catch up with learning and the prioritization of religious education above formal schooling. 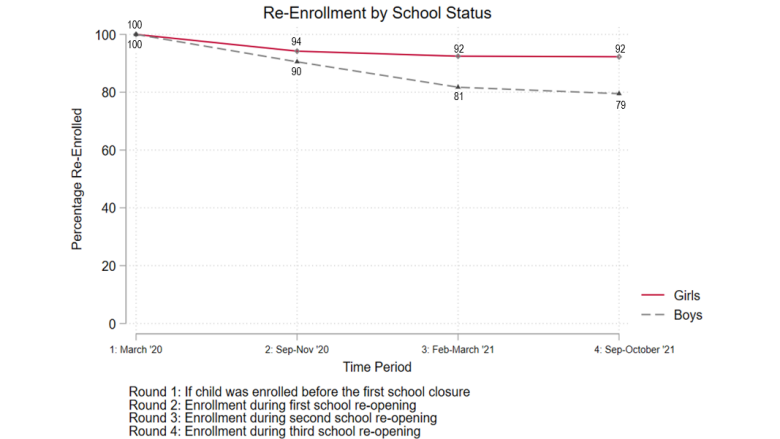 The brief also found that being confined to homes during the school closures led to an increase in burden of work for girls. While the amount of time spent on household chores as well as providing elderly and childcare was found to be highest during the first round of school closures in August to September 2020 for both boys and girls, it continued to be higher for girls across all time periods. Girls spent almost twice the amount of time as boys on household chores such as cooking and cleaning during the first school closures. On the other hand, boys spent considerably more time doing paid work outside the household ranging from an average of 29 minutes during the first round of school closures to 11 minutes from September to October 2021. In some cases, girls were also found to have limited access to TV and cellphones at home.

Like other studies, it was  found that remote learning is not an effective substitute to in-person learning for nearly every student in Pakistan except perhaps the most privileged. Despite quick action by government and private actors to set up remote learning platforms, it has been extremely difficult to keep students and families engaged. Only 14 percent of girls and boys engaged in any remote learning during initial school closures at all, and it decreased to the single digits as the pandemic unfolded. Engagement was even lower in time: the average family reported that their child spent about 12 minutes per day on remote learning, which decreased to 6 minutes for girls and 4 minutes for boys by September 2021.

Qualitative data revealed the dynamics behind low engagement with remote learning, particularly for girls. Mothers reported that their husbands did not think that it was appropriate for children, particularly girls to watch TV and had either given away the TV or opted not to get a cable connection. In addition, findings suggest that other factors, which are not technological in nature, limit the impact of remote learning. These factors include lack of interaction with instructors and peers, the pace of teaching and the medium of instruction. This highlights that while remote learning can complement in-person education, especially if supported by instructors, but it cannot be a replacement.

The pandemic has exacerbated pre-existing inequalities. Wealthier families had opportunities to compensate for lack of technology through private tutoring, which emerged as the more popular medium among parents. Engagement with tutors is found to be particularly high during the exam periods with girls spending a daily average of 47 minutes studying with a tutor, and boys spending 56 minutes during the second school reopening. Both girls and boys in urban areas spent close to twice the amount of time with private tutors relative to those in rural areas (rural girls: 36 minutes versus urban girls: 73 minutes). A more severe disparity is seen between students from the poorest versus wealthiest households (22 minutes and 48 minutes for girls respectively). Loss of income during the pandemic hindered attempts to organize private tutoring to potentially mitigate learning losses, and this was also revealed through interviews with families.

“We were not able to help our daughter at all. For one, [my husband] is a daily wage worker and he does not earn enough to cover our expenses. How can we afford tuition [private tutoring]? my husband was also out of work because of the lockdown. He was unable to get his daily wage job.” – Mother, high-achieving daughter, government rural school.

One of the best things during the pandemic has been the close collaboration between government, civil society organizations, technology partners and other stakeholders. This consortium of stakeholders continues to work to make sure that the first priority is to re-open schools and convince children and their parents to come back to school. In the past few months, the government has sent out text and voice messages to close to 7 million families to drive stronger engagement with the public schools.

This feature story was produced by the team managing the SMS Girl Impact Evaluation, led by Koen Geven, Tazeen Fasih and Amer Hasan. The SMS GIRL impact evaluation is supported by the School Education Department (SED) and the Punjab Information Technology Board (PITB), under the Third Punjab Education Support Project (PESP-3). Funding from the Strategic Impact Evaluation Fund and the South Asia Gender Innovation Lab is gratefully acknowledged.