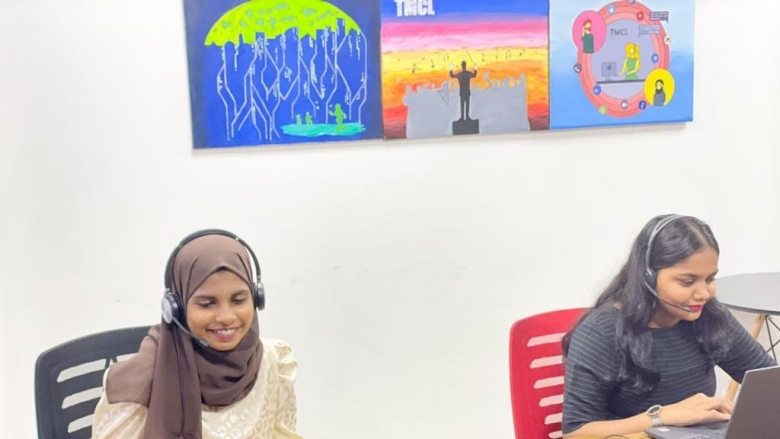 Mirfath Faiz, a 44-year-old single mother living in Maldives, earned a good income by tutoring in her home in Malé, while also selling sweetened areca nuts. But when the COVID-19 pandemic hit, it forced her students and customers to stay indoors, resulting in the loss of her only sources of income. Her ex-husband also lost his job during the pandemic and could not provide child support for their youngest daughter.

The Maldives has a resident population of approximately 500,000 scattered across some 200 inhabited islands. The small state’s economy is reliant on international tourism, a sector decimated by the pandemic. Many Maldivian workers like Faiz and her ex-husband were affected by the crisis, with over a quarter losing their jobs.

The World Bank’s $34.4 million Maldives COVID-19 Emergency Income Support Project aimed to mitigate the economic impacts of the pandemic. The Project supported the Government of Maldives’ Income Support Allowance program, which provided up to 9 months of emergency cash transfers to 23,000 affected workers in 2020. Faiz was a beneficiary of the program, getting monthly payments which helped with utility bills and basic daily costs.

Input from citizens like Faiz is a crucial part of strengthening the Maldives social protection delivery system. To engage citizens, governments usually invite them to participate in face-to-face events such as focus groups, public hearings, and consultations. However, traditional citizen engagement mechanisms like these have not been possible during the pandemic, which threatens to increase the gap between citizens and decision-makers.

Because it was not possible to carry out traditional face-to-face contact with beneficiaries during the pandemic, an easy-to-use online portal, JobCenter.mv, was set up to allow Faiz and other applicants to apply for assistance and monitor their payments from home. However, there were hiccups during the start-up of the new program, such as delays in processing applications.

To address these challenges, the government sent out a follow-up questionnaire to all Income Support Allowance applicants, so that they could provide feedback. Faiz suggested that the average processing times of six weeks could be shortened to help her attend to urgent daily expenses, as did more than 40% of the other responding applicants.

Another beneficiary of the Income Support Allowance was Rilwan Shareef, a musician who lost his income when resorts closed. Shareef also said improving the processing time could further help people struggling to make ends meet.

These sentiments were part of broader feedback which helped the government to improve its efficiency in the second phase. Two-way interactions like these give citizens a stake in decision-making and built feedback loops to ensure citizen voices like those of Faiz and Shareef have been considered.

Some of the measures taken by the project in response to the feedback included simplified documentation, improved functionality of the online portal to reduce rejection rates, and recruitment of 30 additional support staff.

Faiz also made queries through a grievance response team managed by the Ministry of Economic Development. Her complaints were addressed in less than two days, with the average processing time being two to three days. The queries could be made despite the travel restrictions and lockdowns through phone, email, or the website, and were recorded on the job center’s intranet.

"As the Island Council has good rapport with the community, there was a very good turnout for the informational sessions from the community."
Ibrahim Shahid Shahid
Resident, Goidhoo Island

As a result of more innovative citizen engagement mechanisms in the Maldives, in-person workshops have been replaced with smaller meetings and video conferencing. For example, stakeholder consultations were held with 188 island councils via Zoom to discuss the application verification process. One of the leaders of these councils, Ibrahim Shahid of Goidhoo Island, familiarized himself with the income support program and its online portal after the Zoom calls.

“As the Island Council has good rapport with the community, there was a very good turnout for the informational sessions from the community,” Shahid says. “Although nearly all applicants had smartphones, not everyone was well versed with technology. Therefore, the support provided by the Island Councils in the application submission process, including opening of online banking facilities to receive payments, was very much appreciated by all the applicants.”

Information was disseminated through public Viber groups, Twitter, television interviews, podcasts, and news publications, with information available in local languages. This outreach was complemented at the island council level by leaders like Shahid, to ensure those without access to internet are informed about the income support. As these outreach programs took effect, the application numbers increased almost 300% from the first phase.

Communities have been engaged continuously in the process and through multiple channels, ensuring improvement in the efficiency of the project. This is despite the increased physical distancing due to the pandemic between citizens and government. The project is now helping the unemployed return to work by enhancing their skills to find more productive employment, providing technical assistance that will strengthen social protection systems and pave the way for a permanent unemployment insurance program for Maldivian workers.

The success of these innovative elements has shown that citizen engagement can improve project outcomes even in the COVID-19 context.