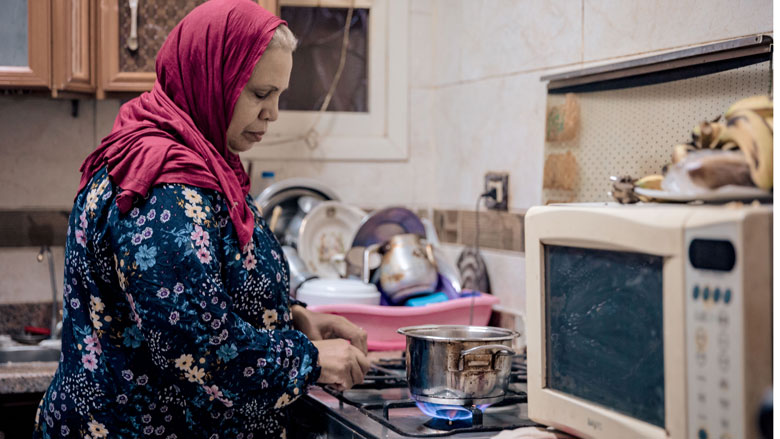 An Egyptian lady cooking food on a natural gas stove.

“Sometimes the cylinder runs out of gas when I am cooking, “ said Fawzia Abdel Azim, a widowed housewife and mother of four children. “In some cases, the vendor tells me he does not have any for the day.” Fawzia was among the millions of Egyptians who for years have suffered without a direct natural gas connection to their homes and resorted accordingly to using LPG cylinders. “I wish I had a gas connection in my house. I would be really happy,” she added. Fawzia’s thoughts were shared in a video filmed in 2014.

In 2013, three out of every four households in Egypt relied on mostly imported LPG, the cost of which was heavily subsidized by the government. The distribution of cylinders was plagued with shortages in handling and transport, making it especially difficult for people with disabilities, the elderly, and for women overall. Vendors  had a strong influence  over the cylinder market, causing price hikes and a black market, which was particularly problematic for citizens who had no alternative to LPG for cooking or heating water.

The Household Natural Gas Connection Project was launched in 2015 to increase and facilitate household access to a reliable, low cost, grid-connected supply of natural gas, one that would include the underdeveloped Upper Egypt region. The project was co-funded by the World Bank and the French Development Agency (AFD), with a grant component from the European Union providing financial support to poorer customers who needed it by subsidizing the connection fee. It aimed to relieve Egyptians of the burden of finding, purchasing, and installing LPG cylinders.

Since its launch, the project has touched the lives of millions of Egyptians, making their day-to-day household activities easier and saving them the time they spent queuing to get LPG cylinders, which was cutting into their study or work time. It has also saved them from some of the social, health and safety risks related to LPG cylinders, where leakages and explosions can cause fatal accidents.

On average half of the project’s direct beneficiaries are women. This means the project has given over 1.15 million women and girls the prospect of leading a better life, as within families women and girls normally bear the burden of finding LPG cylinders and cooking.

“Not having reliable access to gas cylinders was very frustrating, and merchants were controlling the prices,” said Ayman Fawzy, who became a project beneficiary. “We moved out [of our home] temporarily as our whole life depended on takeout and home delivery. We moved back in once it was confirmed we would be getting a household gas connection. Installation was very smooth, and now we can finally cook what we want without worrying that the gas will run out.”

In being able to move out of their home for a while, Ayman’s family had an option rarely available to poorer families, who remain more vulnerable to LPG cylinder shortages.

By the time it closes in June 30, 2022, the project is expected to have connected about 2.3 million households to natural gas grids, with about 400,000 of these households receiving connection subsidies.

Other of its beneficiaries testify to reaping the benefits. “Having a gas connection at home makes our lives more stable, including being able to use water heaters, ovens, and other  appliances whenever we choose,” said Nadia Mahmoud. “Cylinders were expensive and not always available,” said Nour. “The gas ran out in the middle of preparing meals or taking showers. Now with the new connections, we never run out of gas. We also pay less for better service.”

The Household Natural Gas Connections Project includes safety measures, as well as provisions for quality, reflected in its response times to customer complaints and their resolution rates. The project supports Egypt’s larger household gas connections program, which aims to expand nationwide, shifting consumers away from subsidized and imported LPG to the country’s domestic supply of natural gas, and in the process improving services and access to energy, and reducing the cost to the government of energy subsidies.

The project is part of a wider set of World Bank operations designed to fulfill key development needs in Egypt and support its efforts to improve citizens’ quality of life.