Amid the Conflict in Yemen, Mass Campaigns to End the Threat of Tropical Diseases Continue 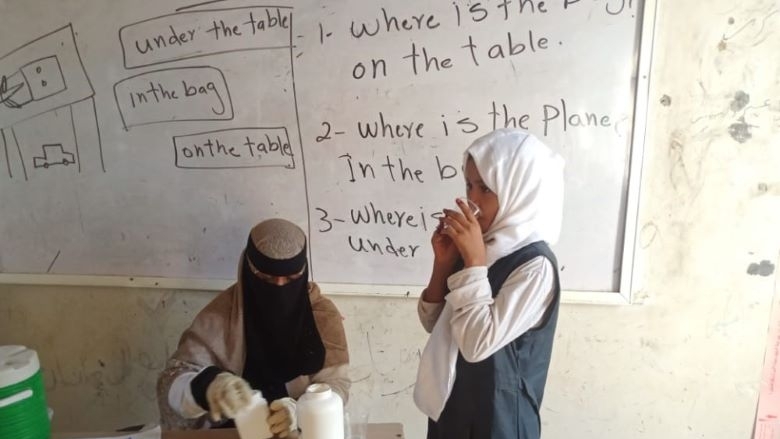 Schistosomiasis and soil-transmitted helminths are neglected tropical diseases (NTDs), but these parasitic worm infections can lead to anemia, malnutrition, and learning difficulties among children. Left untreated, schistosomiasis can damage the liver, intestines, bladder, spleen, and lungs, and soil-transmitted helminths can cause a range of problems, including slow physical and mental development.

Public health authorities have battled for more than a decade to tackle schistosomiasis, supported by partners such as the World Bank’s International Development Association (IDA) and World Health Organization (WHO). In 2010, one in five residents in Yemen were at risk of contracting schistosomiasis, better known as bilharzia.  Today, that has dropped to fewer than one in 15 (about three million people). Limited data exists for the soil-transmitted helminths that affect communities across the country but bringing these infections under control is another public health goal.

Eliminating schistosomiasis involves the mass administration of drugs, in which members of a target population are treated once a year. Several rounds of drugs are administered over several years to get rid of a community of the parasite. The Emergency Health and Nutrition Project (EHNP), funded by IDA, the World Bank’s fund for poorest countries, has helped to eliminate schistosomiasis as a public health problem in Yemen.

“Nothing beats a child’s smile. This project represents a critical opportunity to decrease the disease burden among vulnerable Yemenis, particularly children. The project is part of the World Bank’s strategy to invest in Yemen’s most important assets: its people” said Tania Meyer, World Bank Country Manager for Yemen.

During a recent four-day mass campaign, almost 860,000 children and adolescents between 6- and 19-years-old, were targeted (whether enrolled in school or not) across seven southern and eastern governorates, Abyan, Hadramout/Mukalla, Hadramout/Sayoun, Lahj, Mareb, Shabwa, and Taiz. In total, 37 districts, 373 team leaders, 1,070 team supervisors, and 2,140 drug distributors were involved and over 80% of the target population reached.

Yemen is making progress against other neglected tropical diseases as well. Lymphatic filariasis, which causes swelling of limbs and is spread by infected mosquitos, was eliminated as a public health problem in 2019. The administrative certification of the elimination of leprosy in Yemen is underway, and technical teams are working hard to eliminate blindness of infectious origins: trachoma by 2024, and onchocerciasis, or river blindness, by 2030.

“This progress is encouraging, and a sign that the elimination of schistosomiasis as a public health problem may be within reach in Yemen in the next five years,” said Dr. Adham Rashad Ismail Abdel-Moneim, WHO’s Yemen Representative. “Reaching it, however, will depend on continued support from partners.”

The campaign was carried out in close collaboration with Yemen’s Ministry of Education and th Health Education Center, which is part of the Ministry of Public Health and Population. Technical and statistical local plans were prepared, a training of trainers’ session carried out, and workshops given to drug distributors and the heads of teams in charge of both fixed and mobile treatment facilities. A third-party team conducted direct monitoring of the activities and interviews with around 4,000 people across 1,000 randomly selected households.

More mass campaigns against soil-transmitted helminths and schistosomiasis are planned in  2022, with more investment to improve community engagement made in order to reach more than 80% of the targeted population in future.