Ana and Earl Emberson have had a tough run. In 2018, Cyclone Gita, the strongest- storm to ever hit the Kingdom of Tonga, left them and six other family members trapped under wreckage of their business on tiny Pangaimotu Island. It took them over an hour to find an escape route.

“When we came out, I cried,” said Ana. Their buildings were destroyed, and their oyster lines – where they grow mabé pearls – were gone.

“I sat down and cried, then I called my family to help us to rebuild it again.”

Sadly, nature wasn’t yet done with them. In 2020, Cyclone Harold destroyed their lines again. They rebuilt their pearl farm – again – but now they had nobody to sell to. The COVID-19 pandemic ended tourist traffic to their boutique day resort.

Quick intervention by Tonga’s Ministry of Fisheries is helping to turn things around. With support from the World Bank’s Pathway to Sustainable Oceans (Tonga) Project, the Ministry supplemented their business and skills development efforts, with an urgent push to find new markets for farmers facing income loss.

The Ministry organised a shipment of mabé pearl samples to Hawai’i in February this year. Following a successful pilot, they began regular shipments in May. 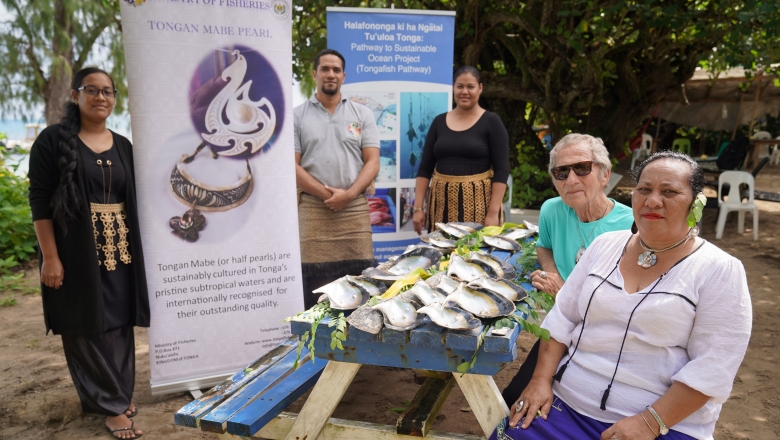 Through the Tonga: Pathway to Sustainable Oceans Project, the World Bank has supported the Tongan Ministry of Fisheries, including access to new markets for pearl farmers facing income loss. World Bank

Fisheries Marketing Officer, Michael Po’uliva’ati explains that since the lockdown in March 2020, there have been “no customers, no sales until the project opened up exports for them this year in February.”

Fai’ana Fukofuka runs her family’s business on the island of ‘Ofu. It is part of the Vava’u group of islands, home to the first pearl farms. The 30 year-old managed a boutique resort and a whale-watching operation, as well as their pearl farm, established in 2018. With borders closed, all their income now has to come from pearls.

"I’m very grateful and thankful that I’m involved in pearl farming, which is another option for me. Our tourism business is locked down. We’re doing nothing at the moment. But with the pearls, we do exports. Even without tourists coming, we are still able to export our products"
Fai’ana Fukofuka
Pearl Farmer and Tourism Operator, ‘Ofu Island

Fai’ana says she is grateful for the bounty that surrounds her. “The ocean is very important to us… it’s our main income. The ocean is part of our life, of course.”

The ocean may be an integral feature in every Tongan’s life. But pearl farming is new. Mabé pearls are the result of a technique derived in Japan. The large half-round pearls can be grown in just a few years, meaning that farmers don’t have to wait long to start earning a living.

Today, dozens of buoys dot the tiny harbour in the country’s northern island group of Vava’u, each marking the spot where lines of oysters reside, slowly growing their lustrous nacre. 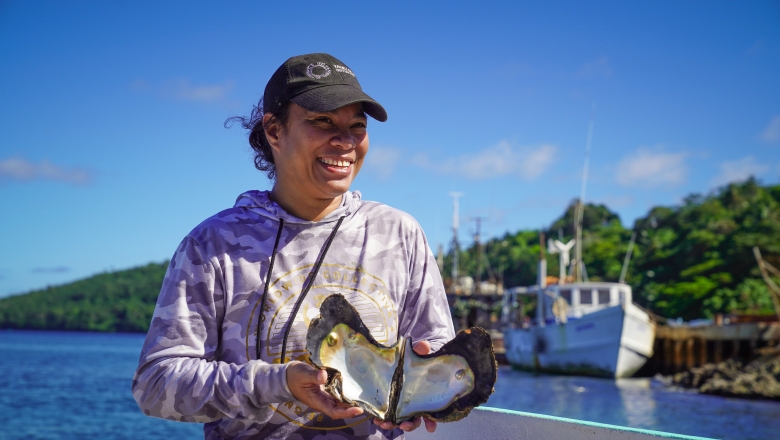 To me, the ocean is a blessing.” Naua Lakai is a Tongan Mabé Pearl farmer from Vava’u, Tonga.

Naua Lakai learned pearly farming quickly at a Ministry of Fisheries-run workshop in Vava’u. A single mother, she supports her five children on the proceeds.

“I’ve been doing it for two years now. I’m looking for my third harvest next week.”

Farmers receive baby oysters, known as spats, from the Ministry of Fisheries, which cultures them in a hatchery on Tongatapu, Tonga’s main island. Vava’u’s clean, sheltered waters are perfectly suited to cultivating oysters, which need to be tended carefully before they’re ready to grow pearls.

Every month or so, Naua checks her lines, scraping coral, seaweed and other organisms from the shells.

“Working out here is stress-free. I mean, you’re not thinking about everyday problems…. To me, the ocean is a blessing.”

When she’s not on the water, Naua drives 30 minutes down the road to Neiafu, where she manages the local pearl processing centre. Inside the workshop, she stands beside a pile of shells.

“It looks like a pile of rubbish,” she says with a coy smile. “But to me it looks like money.” 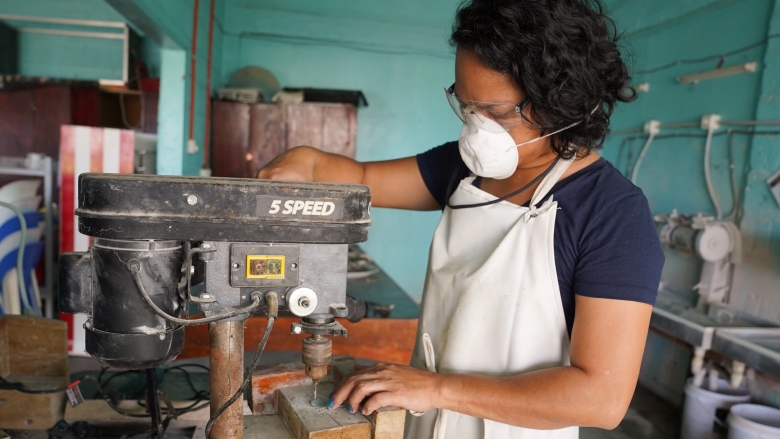 Naua Lakai pictured here in her workshop in Vava’u, is a single mother who is able to provide for her family as a successful mabé pearl farmer and entrepreneur. Photo © World Bank

Tongan women like Naua are reconnecting to the ocean, finding new forms of creativity, and new livelihoods. Marketing Officer Michael Po’uliva’ati recounts one woman’s experience selling her pearls to the newly opened market in Hawai’i. “She’s never experienced that in her life, where with one payment, she could pay off her loan and pay off her kids’ school fees. She bought a new lawn mower. She bought a new washing machine.

“It’s just great to hear these stories from women that mabé pearl farming is indeed an alternative livelihood for the women of Tonga.”

Financial support for this work in Tonga has come from the US$74 million Pacific Islands Regional Oceanscape Program (PROP), which includes US$68 million from the World Bank’s International Development Association (IDA), the World Bank’s fund for the world’s most in-need countries, together with US$6m from the Global Environment Fund. PROP is working in seven Pacific countries, and with the Pacific Islands Forum Fisheries Agency, to help sustainably increase returns from ocean resources, while putting in place systems to protect those resources for generations to come.