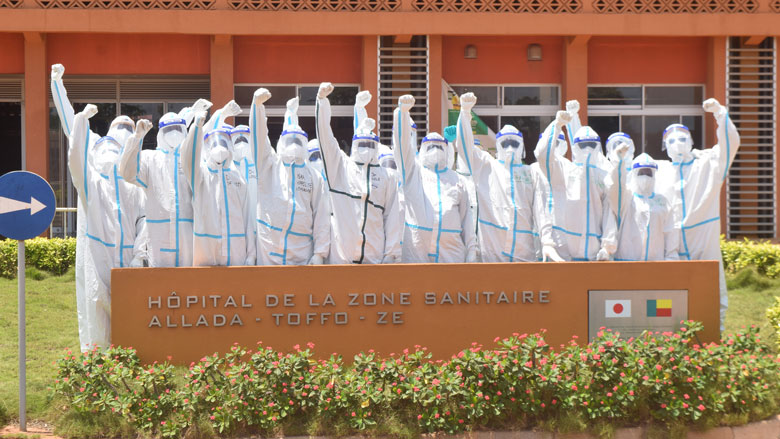 The medical team from the Allada Epidemic Treatment Center, the main institution for the provision of health care to COVID-19 patients in Benin.

Allada, Benin, October 21, 2021 - Wearing a surgical mask, and still weakened by his illness, Martin T steps across the threshold from the red zone housing the COVID-19 patients. He is relieved to enjoy the open air once again and to admire the beautiful scenery, after spending around 10 days in the intensive care unit of the Allada Epidemic Treatment Center, located 50 km north of Cotonou. The two bags containing his belongings are disinfected one last time. Four health care workers, including the coordinator of the center, stand by his side and remind him yet again of the need to adhere to social distancing measures. This is the last step that Martin submits to, before calling his girlfriend to make arrangements for his return to Cotonou.

“It was worse than a nightmare. It was extremely tough, but I take my hat off to the medical team that provided me with such quality health care.” In his sixties, Martin is convinced that his recovery was due to the swift action and attentiveness of the doctors, as well as to the quality of the treatment that he received.

Benin has made up for years of lost time in relation to screening, a development that has been a game changer in the country’s COVID-19 response. © Erick Kaglan, World Bank

Light at the end of the tunnel

As a national referral center, the Allada Epidemic Treatment Center plays a central role in the response strategy of the government of Benin. Up to October 15, 2021, over 1,500 patients had been hospitalized there, including 900 serious cases admitted to the intensive care and resuscitation units.  These figures do not include the hundreds of patients who were isolated, treated, and monitored at home.

Each case is different and the testimonies are moving. After two weeks of care, Sheik G., imam of a mosque in a suburb north of Cotonou, emerged unscathed and has started preaching again. “The coronavirus is real. But its consequences are not inevitable. Thanks to Allah and to the doctors at Allada, I am healthy again,” he said.

Ginette Z., a businesswoman who recovered from the virus, believes that her life was saved thanks to her early admission to the center.

Each recovery is a cause for celebration for the health care personnel who themselves have not been spared the ravages of the pandemic. “When my test results came in, I was in shock,” admitted Isidor Lokonon, Head of Nursing Care at the Emergency Medical Assistance Center (Samu-Benin). “But I quickly calmed down, because I was convinced that Benin was well equipped to respond to COVID-19 and that I would come through just fine.”

"It was worse than a nightmare. It was extremely tough, but I take my hat off to the medical team that provided me with such quality health care."
Martin T
cured of COVID-19, thanks to the care that he received at the Allada Epidemic Treatment Center in Benin.

In Benin, the health professionals have been the main players in the fight against COVID-19. The training of health and emergency medical staff, and the establishment of 80 rapid response teams, played a key role in the response to the pandemic. Thanks to the World Bank's Regional Disease Surveillance Systems Enhancement (REDISSE) Program, the country was able to make up for more than 20 years of delay in epidemiological surveillance and screening.

Support for the health response

The World Bank has provided a little over $42 million to finance the COVID-19 emergency health response in Benin. The country has used this financing to acquire thermal cameras and handwashing stations at 15 surveillance sites at its airport, seaport, and border crossing points. It also helped construct, outfit, and equip five treatment centers. In addition, the project was used to commission and equip 13 laboratories, including one mobile unit and 89 screening centers, as well as for the purchase of personal protective equipment for health personnel and the acquisition of nine fully equipped ambulances for the safe transport of critically ill COVID-19 patients.

“The project provided our center with an intensive care and resuscitation unit, as well as medical equipment and supplies,” explained Rodrigue Grace Glèlè Aho, coordinator of the center. In his view, the consistency and regularity of the support provided by the project played a decisive role in the response. “We were able to increase our patient intake capacity and, especially, to take care of our health care personnel.”

The project also financed the implementation of the national communication and awareness-raising campaign to halt the spread of the virus and provide care for health personnel in three treatment centers, 10 laboratories, and the Samu emergency medical service, and at the seaport and airport of Cotonou.

In addition to financing medical facilities, the project also helped ensure the availability of masks for students and teachers in academic institutions.

In order to ensure that African countries have equitable access to COVID-19 vaccines, the World Bank is also financing the acquisition of one million vaccine doses through the AVAT (African Vaccines Acquisition Trust) and COVAX (COVID-19 Vaccines Global Access) facilities, a partnership of African institutions mobilized to provide vaccines to Africans. The World Bank is also providing support for the logistics and acquisition of supplies and equipment for cold chain systems, as well as for training, raising risk awareness, and community engagement within the context of the national vaccination campaign.  This campaign involves training and provision of care for vaccinators, community health workers, volunteers and supervisors, as well as support for the approval of vaccines before their rollout in the country, the acquisition of refrigerated vehicles, cold-storage facilities, freezers, three incinerators, and other vaccine-related waste management facilities. 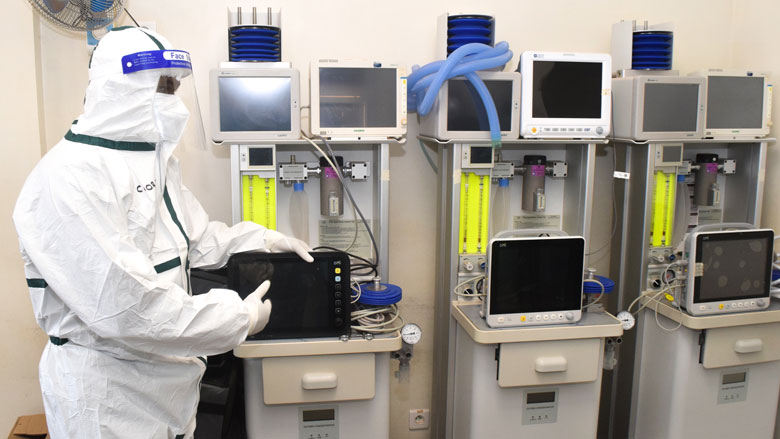