The dream of having your own and constant water

Water in drops: the precarious service in the Dominican Republic.

Milagros Rosario Candelier has a dream. “I want people not to suffer to be able to bathe, to cook food or to clean the house; I want water to reach every home.”

She has water, but it barely comes out of the taps in her house. In Moca, in the north of the Dominican Republic, where she lives with two sisters, the water “does not come with such force, but we supply ourselves; We have tanks so that if there is a shortage we don't have that difficulty,” she says with a mixture of resignation and hope, which she has cultivated in her years as a representative of the Moca neighborhood council.

Milagros is not alone. Having constant tap water is a dream that is out of the reach of most in the Dominican Republic.

Although access to drinking water and basic sanitation is almost universal (97% and 84% of the population have it, respectively), this coverage does not reflect the quality of infrastructure and services.

Six out of 10 urban households and half of rural households report an intermittent water supply. More than two thirds use tanks, pumps, or cisterns to store water for daily consumption.

But that's not all: the poor quality of service in the most vulnerable households forces them to turn to bottled water, which is more expensive.

And the vulnerable population suffers the most.

In addition, two-thirds of Dominican homes do not have sewage connections that allow the treatment of wastewater, which increases the threat of diseases due to groundwater contamination.

The question then is: Why is access to this vital resource still limited in the Dominican Republic?

"Water and sanitation utilities' revenues tend to grow more slowly than their costs because of their intention not to charge users for increases in energy, chemical inputs and personnel, and this reduces the funds available for maintenance," he explains.

This explains, according to the expert, the ruptures in the pipes and the consequent water leaks.

As a result, service worsens, and it becomes even more difficult for the company to increase its billing and collection revenues by demanding payment from dissatisfied users. The situation is further aggravated by illegal connections and excessive use of water for agricultural or inappropriate purposes, without actual consumption being measured and billed.

Water supply to households becomes erratic and this erodes confidence in public providers and discourages households from paying for them, which lowers collection rates, and in turn, destabilizes the financial position of companies to invest, according to Kullmann.

Today, unbilled water ranges from 45% to 95%, according to suppliers. But "given the low tariffs and some inefficiencies in spending, even if the companies billed 100% of the water, they would not be able to balance their finances either," he says.

Therefore, the central government makes transfers to providers to enable them to meet their expenses. Although - affirms the expert - this generates a false sense of financial security that reduces the motivation to seek greater efficiency in the operation and maintenance of services.

Official data between 2014 and 2018 show that the state transferred US$80 million annually to public companies to cover current expenses, resulting in a very heavy burden on national finances and, paradoxically, undermining the improvement of services.

"This must be changed if the population is to enjoy good services," emphasizes Kullmann.

The debate over drinking water and sanitation reforms, which has been going on for two decades, has been unsuccessful. Meanwhile, the cost of this deficient service has become extremely high for both consumers and the government.

"The new administration of Luis Abinader is committed to change the situation of the sector and from the World Bank we will continue to support the country's commitment to invest more, expand services and improve the quality and efficiency of the sector," says Alexandria Valerio, World Bank representative in the Dominican Republic. To this end, the Water Cabinet was created to implement a 15-year strategy with an investment of US$8.85 billion for dams, more efficient irrigation systems, improvement of drinking water services, wastewater collection and treatment, and pollution reduction. It is also expected to achieve a Water Pact with the population that will allow the preservation and availability of water in the future," she indicates.

In support of these efforts, the World Bank approved a US$43.5 million loan to improve drinking water and sanitation services in the municipalities of Moca and Gaspar Hernández, in the province of Espaillat. There, 105,000 people will have access to uninterrupted drinking water service, 12,700 of whom will have a water connection for the first time. In addition, 90,000 people will have access to wastewater treatment services and 47,000 to new sewage connections.

"It is a blessing for our province, and we will be eternally grateful," says Milagros, representing 200 neighborhood councils from the marginalized communities and countryside that characterize the area.

Most households in that province receive water two or three times a week for 6-8 hours and only those with more money manage to store it, a situation that is not unique to that area and has tended to worsen during the pandemic.

Some keys to improve the quality of service are: 1) Establish a consensual leadership in the sector and regulate it; 2) Monitor the performance of the companies; 3) Increase the income of the suppliers without harming the most vulnerable.

It is also key to value water, reduce losses and work to build trust between users and public utilities, as expressed in the spending review document.

Milagros is aware that work must be done to generate this trust: making people aware of the need to pay for the service on time and teaching the new generations to make good use of it and not to waste it so that it can reach everyone.

"Because that is justice: that everyone has water in their homes," she concludes. 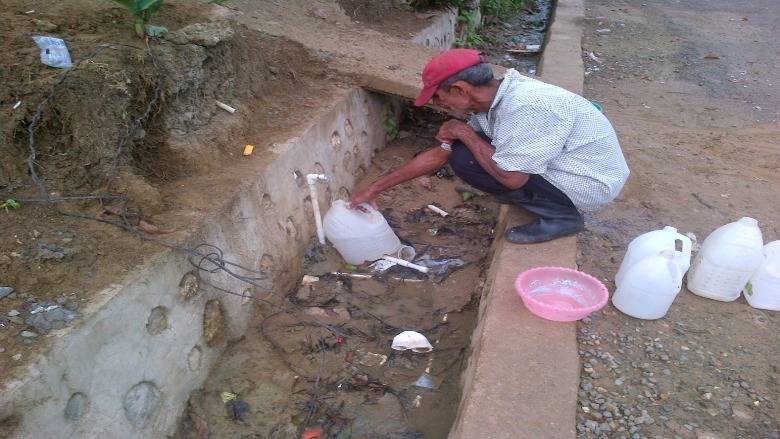