BAMYAN CITY, Bamyan Province – A decade after the local irrigation systems were rehabilitated in two rural communities in Afghanistan's central Bamyan Province, residents continue to reap the benefits of improved water management, although changing climatic conditions are starting to have an impact.

In Foladi and Dokani villages in Bamyan city where the majority of residents depend on farming, ensuring the irrigation canals are in good working condition is a top concern, which was why the canals were upgraded in 2009 under the Irrigation Restoration Development Project (IRDP).

As the dry season comes to an end in Bamyan, the local shura, a council of elders, from Balkhi neighborhood in Foladi village walks along the canal inspecting its bed in preparation for the upcoming wet season. Taking advantage of the low water levels, the council notes places for repairs and clears away debris from the canal intake valves.

Aewaz, 77, a farmer from Foladi village, recalls the problems with flooding before the canal rehabilitation. “The river used to destroy our sand bags 3–4 times a year and flood our villages and crops,” he recounts. “We had a lot of problems before, but now that these intake valves have been installed, we don’t have a flood problem. After this project, the situation is better.”

The rehabilitation included lining the Balkhi canal bed and sides with concrete, installing metal gate valves at weak points prone to flooding, and adding small footbridges to address the most pressing problems. 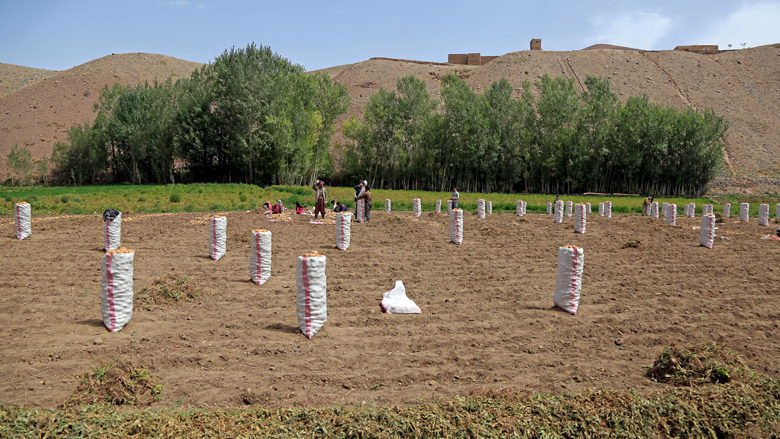 Farmers yielding their products in Balkhi and Dokani areas of Bamyan province where the rehabilitated irrigation canals have resulted in increasing farming productions and a better living condition for farmers. Photo credit: Rumi Consultancy / world Bank

Amin, 35, IRDP Bamyan provincial manager, points out that improving water management through infrastructure improvement has had long-term benefits for Bamyan Province, where 90 percent of the population depend on agriculture. “As the majority of Bamyan residents rely heavily on agriculture, projects like the rehabilitation of the Balkhi irrigation canal are extremely important. If we can improve water management, we can help rural farmers improve their livelihoods and raise their standard of living as a result.”

More than 600 households in the four villages— Foladi, Nawrozi, Qhazan, and Sia Khar Bloq—served by Balkhi canal have seen their economic and living conditions improve significantly. Says Qhulam, 79, a farmer from Foladi village: “I used to get 3,500 kg of potatoes from my land and with the better irrigation, I harvest 5,400 kg. My [monthly] income has increased by 2,000–2,700 afghanis ($26–$35)*. This project was the right decision for the people of our village.”

The Balkhi canal is one of over 180 irrigation schemes rehabilitated across the country by IRDP. Over 425,000 households benefited from IRDP services, which aimed to improve access to irrigation in the targeted areas and strengthen capacity for water resources management at the National Water Affairs Regulation Authority (NAWARA). IRDP was implemented by the Ministry of Energy and Water and then by NAWARA through six regional offices: Kabul, Kandahar, Kunduz, Herat, Jalalabad, and Mazar-e-Sharif.

IRDP was funded by the government, the Afghanistan Reconstruction Trust Fund (ARTF), managed by the World Bank on behalf of 34 donors, and the International Development Association (IDA), the World Bank Group’s fund for the poorest countries.

"Our family’s income has doubled since the canal was rehabilitated…This project has been very beneficial for us. The canal is the life of this village. "
Sayeed Ali Razavi
farmer, Dolkani village, Bamyan Province 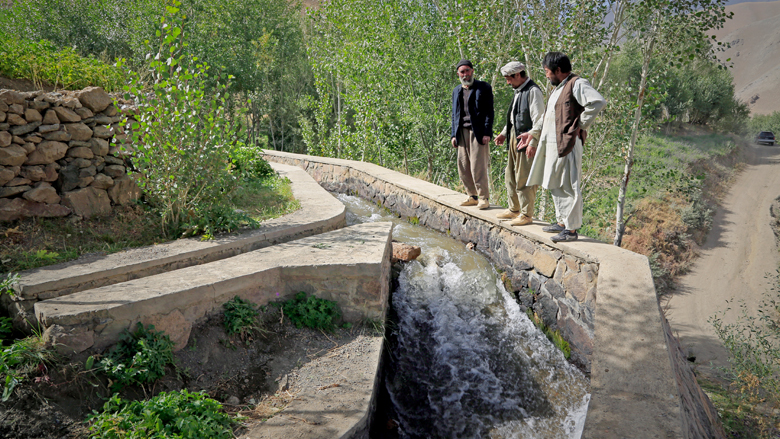 About 14 km away from the Balkhi canal, the upgrading of the irrigation system in Dokani village has brought similar progress in income and living conditions, although it addressed an entirely different issue from Balkhi. “Before the canal was rehabilitated, our biggest problem was water shortage,” says Sayeed Qorban Ali Wafaie, 67, head of the Dokani Irrigation Association.

After the canal rehabilitated, farmers in Dokani were able to switch from growing low-earning baghali beans to cultivating potatoes and wheat because of better water management. “We cultivate potatoes now and they bring 3–4 times more revenue than baghali beans,” Wafaie says. “This was all possible because of the canal project.”

Like other farmers in the area, Sayeed Ali Razavi, 61, has seen his income rise after the irrigation system was upgraded. “Our family’s income has doubled since the canal was rehabilitated,” he says. “Previously, we harvested 560 kg of wheat. Now, we can harvest 1,120 kg of wheat and 10,500 kg of potatoes on 6,000 m2 of land. This project has been very beneficial for us. The canal is the life of this village.”

IRDP Bamyan provincial manager Amin Zaki says that more than 800 families have benefited from the 2009 Dokani rehabilitation project. He is, however, aware that more projects are needed for the future. “Changes in climate and recent droughts have resulted in grave consequences for water flow across Afghanistan and, especially, in Bamyan Province.” he says. “We need to take serious measures to invest in water [management] in Bamyan and Afghanistan.” IRDP has already begun procurement for two more water management projects in the Yakawlang district of Bamyan Province.