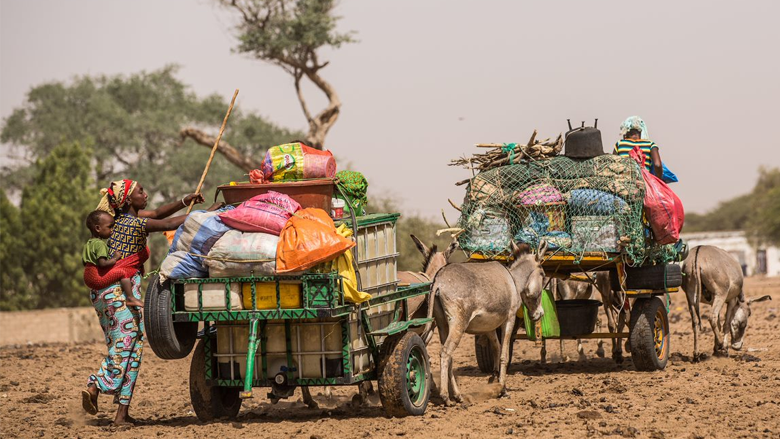 The herders leave with the animals, while the rest of the family follows by cart with all of the necessary supplies.

More than 20 million herders across the Sahel region move their cattle, searching for water and pastureland. This is because 75 percent of the Sahel is too dry to allow livestock herders to remain in one place.

Each year, in early November, the first signs of drought appear—rivers start to dry up and pastures become scarce. So many families, often in small groups, begin a months-long journey in search of water and pastureland.

Today, however, the pastoralists face a new problem that they cannot overcome alone—climate change. Their traditional way of life is in danger. The rainy seasons are growing shorter, and the dry seasons are longer, sometimes lasting up to nine months. The drought in 2010 was particularly severe. Niger lost 4.8 million head of cattle, roughly 25 percent of the herd, representing a loss of more than $700 million for the country’s economy.

“One of the things that has most changed our lives is the training provided by water and forestry officials for combating brushfires,” explains Hamidj Barry, mayor of a village near Senegal border. “It is a transmission of knowledge that we will keep forever.”

Between 2015 and 2020, the project helped establish and improve the management of more than 5 million hectares of pastureland, 181 water points, and 66 cattle markets. It also supported the economic activity of 20,700 people, 88 percent of whom were women.

The COVID-19 pandemic threatened these gains. As borders closed to contain the spread of disease, herds of cattle could not return to their homelands, and significant animal health risks arose as pastoralist concentrated at the borders. IDA is now providing additional financing to set up monitoring initiatives, strengthen existing early warning systems, and provide targeted responses to support those in agro-pastoral sectors.