The Amazon River flows for more than 6,600 km and together with its tributaries and streams contains the largest number of freshwater fish species in the world. Fishing plays a significant role in the Amazonian local economy both for subsistence and livelihoods generation.

In the state of Amazonas in northwestern Brazil, overfishing and sport fishing threaten the fisheries sector. Many commercial fleets, for example, take advantage of loosening environment laws and weak capacity for monitoring—which grew even worse as local governments operated under a further reduced capacity during the COVID-19 pandemic. The most threatened species are the giant pirarucu (Arapaima gigas), the fruit- and seed-eating tambaqui (Colossoma macropomum), and the tucunaré—also known as the peacock bass (Cichla ocellaris).

In addition to endangering livelihoods, overfishing and sport fishing also affect fish stocks and the size of the fish because their growth and development cycles are interrupted when caught during breeding season.

The Amazon Sustainable Landscapes project in Brazil (Br-ASL), financed by the Global Environment Facility and led by the Brazilian Ministry of Environment, in partnership with the Amazonas State Environment Secretariat (Secretaria de Estado do Meio Ambiente, or SEMA-AM), Conservation International, and the World Bank is enabling communities in Amazonas to strengthen governance and management of fisheries to promote sustainable fishing and income generation.

In 2020, the Br-ASL project helped establish four fisheries agreements in Amazonas communities, with a fifth agreement expected to be signed this year. These will benefit nearly 700 families and close to 1,000 community fishers. Prior to the project’s involvement, some communities had been discussing the need for such agreements and in 2011 one was negotiated between SEMA-AM and local communities called “Acordo da Ilha da Paciência” (Patience Island Agreement).

The agreements—established in the communities near the Cuieiras River, Canutama Forest, the mouth of the Tapauá River, the Piagaçu-purus Reserve, and the Tupana River (expected to be signed in 2021)—establish the allowable fishing practices and guidelines for both local fishers and sport and commercial fishers with the goal to manage and gradually recover the region’s fish stock and sustainably manage the aquatic environments. Additionally, the agreements aim to preserve riparian forest and other aquatic bodies. 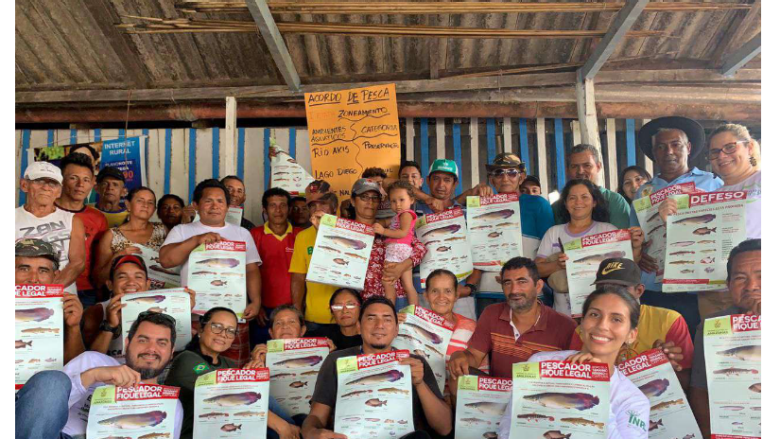 Elements of a fisheries agreement 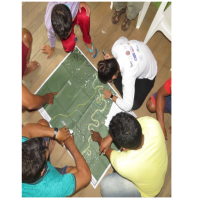 Canutama Forest community members and SEMA technicians drawing up the first map for the fisheries agreement that was signed in 2020. Photo credit: SEMA.

Negotiations for the Br-ASL supported fisheries agreements began in 2019, and, as noted by ASL Program Coordinator Ana María González Velosa, the key to moving them forward was community engagement and building capacity and trust between the communities and the government. The two main stakeholders are the communities and SEMA-AM. In each case, the process began by a community approaching SEMA-AM and together they worked through concerns and designed the agreements based on an aquatic environment zoning map and input from other stakeholders regarding allowable fishing gear, methods and fishing volumes.

“There was not a one-size-fits-all approach to the process and each community developed their own instruments for dialogue,” said Maria Eliene, a technician and Head of the Forest Management Geoprocessing Center, a unit based in Amazonas. Even though fishing is not an activity traditionally done by women, the government encouraged women to be involved in establishing the agreements.

Larissa França, a former technical advisor and fishing engineer with SEMA-AM, said that initially community meetings were mostly attended by men and it took time for residents to adapt to the involvement of female government technicians. Once the agreements began to mature, local women also got involved in the process. 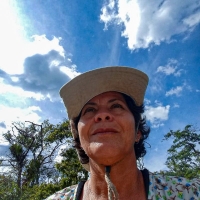 The 100-family Tupana community initially had some reservations when the proposal for an agreement was introduced by a local institution called Casa do Rio (River House) in May 2019—even though local residents saw a decrease in fish stocks after a large-scale federal road built nearby (the BR-319) threatened the river’s aquatic habitats by facilitating access for sport fishing. Maria da Paz, a teacher and community member, stepped up to mediate the fisheries agreement and became a key player in the negotiations with SEMA-AM. She ultimately earned the community's support by explaining how they would benefit and earn more income via an agreement that established sustainable fishing practices and controls over sport fishing.

Local NGOs, associations, universities, and sport fishing companies have also taken part in conversations between the local communities and SEMA-AM for these different agreements. The Special Secretary for Regional Policies (SEPRE) and the Amazonas Institute for Environmental Protection (IPAAM) have contributed with technical resources and commissioned zoning studies. SEMA is responsible for monitoring compliance with the agreements, and IPAAM and the Brazilian Institute of Environment and Renewable Natural Resources (IBAMA) inspect and fine those found to be non-compliant.

Under the agreements, fishing activities will be evaluated in the regions for 3 years and based on the results actions can be suggested to improve them.

A closer look at the Cuieiras River agreement

The Cuieiras River agreement aimed to recover the fishing stock, specifically of the tucunaré, by banning sport fishing until December 2021 to allow the fish to mature. The agreement—negotiated between SEMA-AM and the riverside communities including the indigenous community Três Unidos—also prohibits the use of specific fishing gear and methods, such as "batição", an unsustainable predatory technique involving placing nets in the river’s course, similar to trawling fishing, that indiscriminately threatens fish populations. Those who fail to comply with the rules are subject to penalties and, if applicable, legal proceedings.

Results are starting to show

At the community level, the process has helped strengthen communities, build capacity and governance, and improve dialogue and cooperation between the communities and the government.

Flávio Ruben, a Project Coordinator at the Executive Secretary for Fisheries and Aquaculture (SEPA) and the Secretary of State for Rural Production (SEPROR) in Amazonas, has engaged in the agreements process from the beginning. He said that conflicts over the exploitation of fishing resources between community members, urban fishermen, and fleet owners have been decreasing and there is already some visible recovery of fish stock, especially in areas where the agreements aim at improving pirarucu management.

A future phase for the Br-ASL project will build on the lessons learned from the established agreements and scale up these efforts to 10 more communities in Amazonas State.

“ASL Brazil’s support was fundamental for information sharing and communication with SEMA-AM, executing the bureaucratic procedures of the process, and in addressing doubts and technical questions,” said Ruben. “With this gradual recovery, more income will be generated for families benefitting from the agreements to improve their quality of life.”

Article: Discover the History of Maria Da Paz and the Tupana Community in the Amazon to Protect Fishing in the Region

Video: Promoting Sustainable Land and Water Use in the Amazoa)