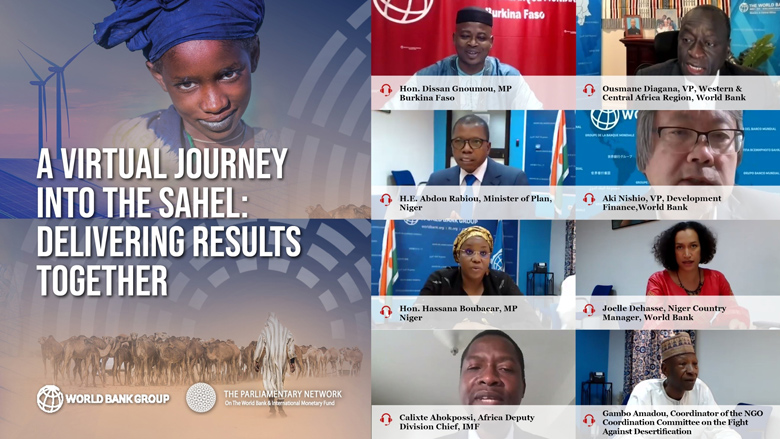 “We welcome participants within the framework of a virtual visit to allow them to meet, to discuss, and to interact with international institutions, and to illustrate the World Bank’s strategy in the Sahel region.” Hon. Dissan Gnoumou MP, Burkina Faso

Parliamentarians and key donors embarked on a virtual field visit to the Sahel region of Africa during A Virtual Journey into the Sahel: Delivering results together. The event, co-organized by the World Bank and the Parliamentary Network on the World Bank and IMF, unveiled an immersive 360-degree virtual storytelling mission allowing visitors to witness the impact of International Development Association (IDA) projects in the region across the three pillars of the World Bank Group Sahel strategy – climate, people, and infrastructure. Emphasis was placed on the importance of partners and stakeholders in achieving results, with a spotlight on stakeholder voices under each pillar. 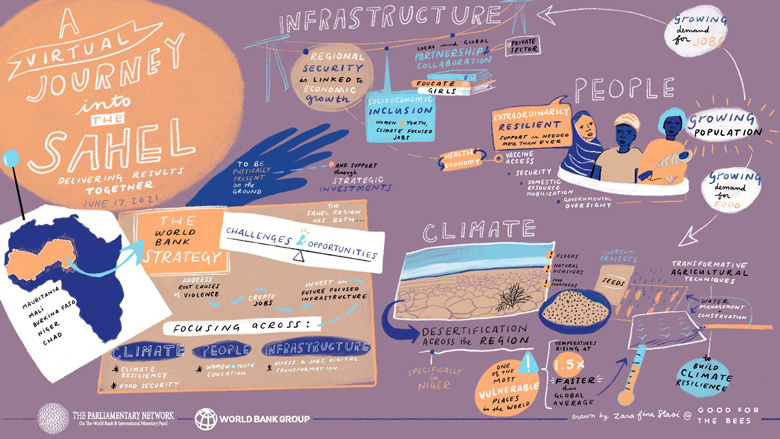 The event was an opportunity for some 127 participants to dialogue directly with World Bank experts and stakeholders from the region and gain a deeper understanding of the development process in action. The experiences, ideas, understanding, and reach of stakeholders, such as parliamentarians, CSOs, faith leaders and the private sector, who instinctively navigate the intricacies of the Sahel’s complex environment, are priceless in shaping meaningful development interventions. Stakeholder and community engagement is at the heart of all efforts to ensure that the Sahel countries receive maximum support and that the World Bank’s strategy for the region is operationalized in the most effective manner. The perspectives provided by H.E. Abdou Rabiou, Minister of Plan, Niger; Hon. Hassana Boubacar MP, Niger; Gambo Amadou, Coordinator of the NGO Coordination Committee on the Fight Against Desertification; and Frederic Dollon, Agronomist and Program Manager for Netafim North and West Africa only enriched the conversation and validated the World Bank’s work in the region.

“More than ever before, I feel that we need renewed solidarity to respond to the hopes and ambitions of the people of the Sahel,” Ousmane Diagana, World Bank Regional Vice President of Western and Central Africa

The Sahel, situated on the belt of land below the Sahara Desert that stretches from Africa’s Atlantic Coast to the Red Sea, was historically known for its pastoral way of living, aided by abundant human and natural resources. However, it is vulnerable to climate change, which is already reaping serious consequences on agricultural and livestock output. Joelle Dehasse, World Bank Country Manager underscored the climate threat, “The region of the Sahel is one of the most degraded in the world from an environmental standpoint…the temperature is actually 1.5 times higher than everywhere else, on average.”

While the changing climate, combined with decades of conflict and rapid population growth, were already straining available resources, the COVID-19 pandemic has pushed people farther into a cycle of poverty. More than 11 million people living in the Sahel face the threat of famine and 40% of children under the age of five are stunted. Ousmane Diagana, World Bank Vice President for Western and Central Africa explained how the World Bank’s Sahel strategy aims to address these compounding problems to deliver results at scale for the Sahel around three interdependent areas: climate, people, and infrastructure.

Together with partners including the Sahel Alliance, the World Bank Group has boosted financial support to the G5 Sahel countries - Burkina Faso, Chad, Mali, Mauritania, and Niger, notably through IDA, to support conflict prevention, resilience, and emergency responses. “The Sahel is a very important region for the international community,” said Akihiko Nishio, Vice President of DFi, as evidenced by the fact that the IDA flows to the region increased from $2.5 billion during the three-year period of IDA17, to $6 billion in IDA18, and now has the ambition to reach 8.5 billion for 2021-23.

Moderated by Burkina Faso Member of Parliament Dissan Gnoumou, the discussion centered around priorities for the region in overcoming the COVID-19 crisis through World Bank and IMF assistance to countries in rolling out vaccines, supporting small farmers, and building resilient communities. The discussion also underscored the importance of IDA in helping Sahel countries meet their development goals, garnering support among key actors for an early IDA20 replenishment.

“In the past few years, we have seen a very visible and clear transformation in this country, and this transformation has been possible thanks to the support of international partners and the World Bank,” H.E. Abdou Rabiou, Minister of Plan, Niger