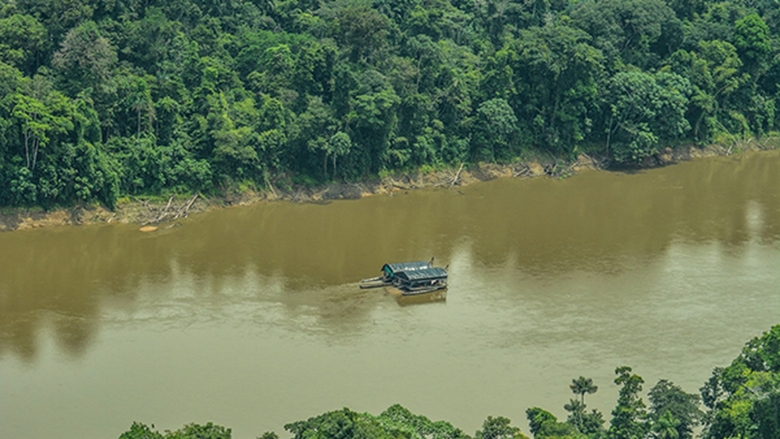 Illegal extraction of gold and other minerals affects one of the world’s most biodiverse areas as well as the livelihoods of millions of people.

The Amazon region is recognized as having the world's largest tropical forest and river system. Covering the territories of 9 Latin American countries, the region accounts for 10% of the planet's biodiversity. It is home to more than 47 million people, including 410 indigenous groups. In view of its immense size and environmental characteristics, the region plays a fundamental role in the regulation of the climate, the water cycle and the environmental and economic prosperity of the area. It follows that protecting and conserving the Amazon is of vital importance for the global ecosystem.

Together with deforestation, pollution of the rivers is one of the greatest threats to the various Amazon ecosystems. One of the main causes (among others) of river pollution is the extraction of valuable minerals such as gold through the use of unsustainable practices. The ever-growing demand for gold continues to have a damaging impact on the Amazon’s forests and water sources. One of the most common unsustainable practices is the use of mercury to separate and extract gold. Given its negative impact on the environment and human health, this practice is in most places considered to be illegal.

Inadequately controlled mining has generated deforestation, soil erosion, and the contamination of water and hydrobiological resources, as well as leading to changes in river courses.

According to a report by the World Resources Institute and the Amazon Geo-Referenced Socio-Environmental Information Network (RAISG), illegal miners have invaded 370 indigenous territories, where all types of mining are illegal, and are involved in clandestine extractive operations which pollute at least 30 Amazonian rivers with mercury.

The battle against mercury

While mercury finds its way into the rivers, fish migrating across borders and shared watersheds are the main source of food for the inhabitants of different parts of the Amazon region. An estimated 80% of the predominantly indigenous communities depend on fish for their food.

Hair and blood samples taken with the consent of some inhabitants of the Colombian Amazon show the presence in the blood of up to 150 times over acceptable levels of mercury according to the World Health Organization. Such high body concentrations of the metal can have serious repercussions on the nervous, digestive and immune systems.

This problematic situation has set alarm bells ringing in various countries of the region, and it is in this context that the Amazon Regional Alliance emerged, aimed at lessening the worst impacts of gold mining. The Alliance, first established in Colombia and currently including government and civil society entities from Brazil, Peru, Bolivia and French Guiana, seeks to generate collaboration and knowledge among its members targeted at actions to prevent, reduce, and reverse the impacts of gold mining on the rivers, inhabitants, animals and plants of the Amazon region.

The members of the Alliance seek to strengthen opportunities for dialogue and decision-making between governments, institutions and citizens with the aim of promoting, through public policies and citizen projects, effective solutions to the impacts of mining, as well working towards the elimination of the use of mercury.

A further goal is to create tools for improving the planning of natural resources, and to develop sustainable mining practices especially focused on local community development. Alliance members will jointly formulate a set of monitoring and control protocols and will play a key role in monitoring the areas that are at greatest risk in the Amazon.

The Alliance will also promote health awareness campaigns for communities vulnerable to mercury pollution, and will aim to encourage gold buyers to purchase the metal responsibly from areas that do not use mercury for its extraction.

The overall goal of the Alliance is to strengthen the links between the public sector, civil society and communities in a concerted effort to tackle this issue. Various institutions have joined forces with the Alliance in this endeavor, including the World Bank.

Ana María González Velosa, leading expert of the World Bank in environmental matters in Latin America, says “The Alliance has the potential to promote dialogue and collaboration to address a regional problem. The possibility of supporting its work in places such as the Putumayo-Içá river basin (shared between Brazil, Colombia, Ecuador and Peru) will generate key lessons for other strategic places in the biome.”

The Amazon Sustainable Landscapes Program (ASL), funded by the Global Environment Facility and coordinated by the World Bank, is at present working alongside Brazil, Colombia and Peru to protect this globally significant biodiversity. The Program’s activities include implementing policies to promote the sustainable use of natural resources and the restoration of the native vegetation cover in the Amazon region.

Through the support for the Alliance and specific efforts in areas such as the Putumayo-Içá river basin, the ASL program is also working to promote better decision-making for controlling water pollution caused by mercury. The Program is tasked with sharing relevant scientific and traditional data to help foster collaboration between the different sectors and the planning of sustainable land and water uses in the region.