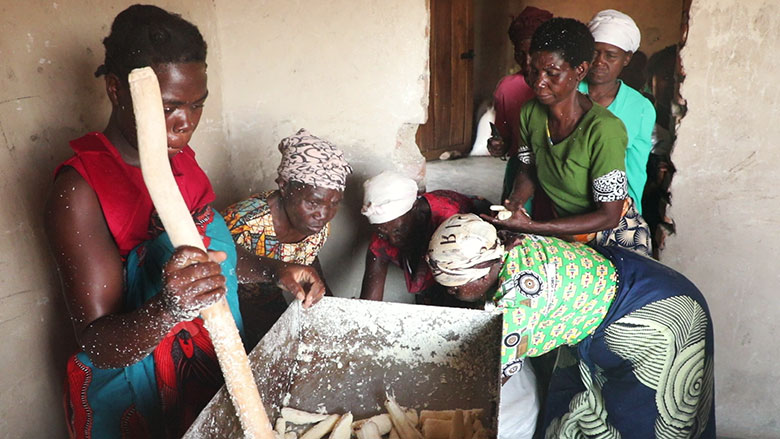 LILONGWE, June 3, 2021—It is a busy day at Nsanama trading center, the local commerce hub for citizens in the Machinga District. Lots of people are out and about; trading, shopping, loading bags of rice in a truck, boarding taxis, and the women at the cassava milling factory are hard at work, loading and grinding cassava in the mill that can be heard for miles around.

The main operator is holding a metal bar, swinging it inside the mill where they have put the dried cassava. She must swing it hard to have the cassava go down a grinder. Another woman, whose face is covered in all white-flour, is holding a bucket under a pipe from which the flour is coming down.

“We give each other turns,” explained the woman operating the machine while she wipes sweat from her face. “It will be much easier when we install the new machine because that will not require us to physically operate it to grind the cassava.”

But they are not the only women working at the factory on this day.  Outside of the building, about a dozen women are doing other activities; some are washing buckets while others are loading the dried cassava into sacks to pass it on to those inside. It a chain of coordinated activities, with a clear division of labor.

Such is the unity of purpose at the Nsanama Women Cooperative in Machinga district. The group is producing high-quality cassava flour, and their production capacity with the new machine is about to increase, raising hope not only for members, but the community.

The Nsanama Women Cooperative, run and managed solely by women farmers, has received a matching grant from the Agriculture Commercialization Project (AGCOM), a $95 million project financed by World Bank to promote commercial farming.

Part of the AGCOM funds are earmarked for matching grants, given to market-linked producer organizations. Beneficiaries are expected to contribute 30% of the sought funding.

“We need to work with groups that are committed and can make a 30% contribution as a demonstration of commitment and we aim to reach groups that will be able to sustain the gains beyond the life span of the project,” said Teddie Nakhumwa, AGCOM’s national coordinator and an agriculture economist himself.

The Nsanama Women Cooperative is among the first of 30 production organizations to qualify for the matching grant. In the first tranche, the group received about $15,000, allowing them to purchase state-of-the art mill, which will significantly improve production, according to chairperson of the group Loveness Andiseni.

“We currently can only manage to produce 1.5 tons per month against the market demand of 50 tons. With the new machine we will be able to meet the demand,” said Andiseni, adding that the new machine will also be used for making of maize flour and livestock feed—thereby widening the customer base. 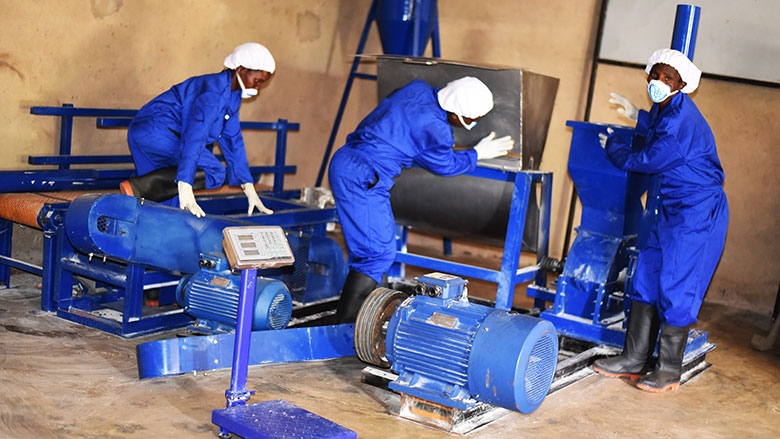 Women of faith and vision

The cooperative started in 2008 as a coalition of 410 women farmers dedicated to promoting fellow women farmers with support from the German International Cooperation.

Over the years since then, many members have opted out due to personal reasons. In 2015, with only 57 women members, they registered as a cooperative.

“My husband thought this was a group of irresponsible women so he advised me to quit but I did not,” said one member, echoing a common experience among the women. “But am glad that he now sees value in this because I am able to support my family.” She now has a better house built with proceeds from their farming.

Andiseni too, is building a modern house – which is quite an imposing structure in a neighborhood full of old grass-thatched houses.

AGCOM, known as a “flagship project for both the Malawi government and the World Bank” to those familiar with it, is a joint effort to drive commercialize agriculture. Commercializing agriculture is a critical investment area of the Malawi Vision 2063, which aims to move the country to upper middle-income status, and supported by the current World Bank Country Partnership Framework.

“We can see that some agriculture producer organizations are making investments through the matching grants and others are already recording encouraging results like the Nsanama Women Cooperative in Machinga,” said Hugh Riddell, World Bank Country Manager for Malawi. “We therefore further expect improvements in the business environment for the overall agricultural and food sector in Malawi and that such results will benefit other farmers beyond those supported by AGCOM project.”

The five-year AGCOM project intends to reach out to about 200 producer organizations with matching grants among other support components, through 2023.