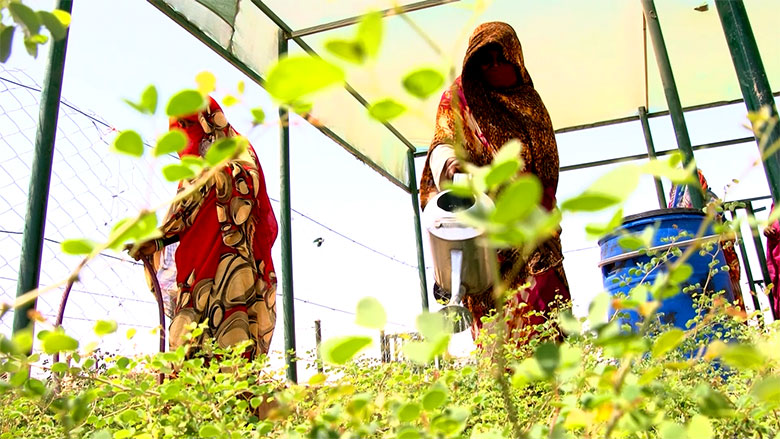 KHARTOUM, May 4, 2021 – In the rural localities of Eastern Sudan that are home to displaced people and the communities who host them, the greenery can be deceptive. The flat desert is dotted with tiny villages sprawls for miles around, and the only colors to be seen are in fields of okra, pumpkins, tomatoes and the bright clothes of women farmers harvesting their vegetables in small farms surrounding their neighborhoods.

A group of women are all smiles as they go through their record books and count the revenue gained from their community horticultural gardens and livestock production. These activities offer them major opportunities to strengthen food security and to improve their livelihoods, a big contrast from the past, when the women in these communities had far fewer economic opportunities.

“We succeeded. Women are keener than men on community-related matters, and managing horticultural gardens is mostly done by women,” said Fatima Mohamed, a 34-year-old mother of four who lives in Rural Kassala locality. “My own project of raising goats enabled me to secure milk for my family. I’m also able to generate income which noticeably improved the living standard of my family.”

This kind of dramatic transformation has been made possible on a large scale with the support of the Sustainable Livelihoods for Displaced and Vulnerable Communities in Eastern Sudan Project (SLDP). Funded by the government and the World Bank State and Peacebuilding Fund (SPF), the government-implemented project was designed to strengthen the capacity of local stakeholders, including state authorities, displaced persons and vulnerable host communities, to plan and implement improved livelihood and natural resources management practice. With a budget of $7.135 million, it consisted of two phases over an eight-year period, beginning in 2013 and ending in 2021.

The first phase targeted six internally displaced persons (IDPs) and host communities in Rural Kassala, Rural Atbara, and Northern Delta localities. The second phase expanded the program to an additional 10 communities in Rural Kassala, Rural Aroma, and Northern Delta localities. Additional financing in the amount of $500,000 was provided in December 2019 by the Sudan Transition and Recovery Support (STARS) Trust Fund to expand the project support to youth entrepreneurs in Khartoum and Kassala States bringing the total number of beneficiaries to approximately 47,000 beneficiaries.

Livelihood and the Environment are Interconnected

However, families such as Fatima’s still face challenges. Eastern Sudan, one of the most arid and poorest parts of the country, has experienced long-standing marginalization, underdevelopment and chronic poverty. Most of the region’s population are cattle herders and farmers, with most earning their living from subsistence farming.

The region has been drastically affected by long periods of drought (since 1983), and conflict (1996-2006), both of which have caused significant changes to livelihoods, accelerated impoverishment and left many rural populations highly vulnerable. As a result, the state is ranked high among malnourished states with 38.2% of children under five-years-of-age affected by stunting, higher than the average for the Africa region at 29.1%. In recent years, communities have been suffering from the effects of climate change, resulting in water scarcity, diminishing crop yields and livestock production annually.

To counter these manifold challenges, the project presented a model that ties together livelihood options with natural resources management.

“Through a variety of awareness campaigns and well-tailored training packages, SLDP is helping targeted communities of people understand that poverty and environmental degradation are not inevitable,” said Milena Stefanova, World Bank Country Manager for Sudan. “By introducing diversified livelihood options and new technologies, the project provided them with choices in how they respond to difficult circumstances.”

Ali Adam, a 29-year-old who lives in the Gulsa area, received funding from the SLDP for his small retail store. His income was low before the project, but after funding Ali said he was able to achieve a high enough income to expand his businesses to include a juice shop and a mobile phones charging shop. He also bought a donkey cart to sell water, which in turn allowed him to provide job opportunities for youth in his village.

Throughout the project, the total number of people in communities who participated in the capacity building activities reached 17,195. In a household survey, 67.4% of respondents noted that the implemented interventions have led to positive behavior change in the communities, promoted peaceful co-existence, and increased access to pastures and water by 40%. The project exceeded its target of completing 30 small works by 10% by expanding water pumping for irrigation and household consumption using renewable energy sources, replacing existing diesel pumps with solar operating units, and distributing gas cylinders and stoves for cooking and charcoal making, thereby reducing tree cutting.

The SLDP recognized the rural poor’s reliance on the environment to sustain their livelihoods and responded directly to the priorities outlined by local stakeholders and beneficiaries. At its conclusion, the project exceeded the beneficiaries target by 11%, reaching 45,521 people, of which 40% are women.

At the community level, the establishment of the revolving funds mechanism enabled the support of new initiatives, and expanded the small works to benefit more segments of the population. The revolving fund is a fund or account that is being managed by the Community Development Committee (CDC) and remains available to finance additional beneficiaries by repaying in installments money used by existing beneficiaries of the fund. For instance, by the end of the project, a sum of SDG 417,000 was repaid by the 10 communities, which in turn was used to support additional 51 households. In terms of sustainability, the promotion of knowledge, technical know-how, and development planning and implementation to local government authorities reached 83%, exceeding the target by 23% -- an encouraging indicator for the continuity and future replication of the approach to other localities.

“The SLDP experience has also helped generate important lessons learned and best practices for operating in challenging fragile contexts,” said Helene Carlsson Rex, World Bank Practice Manager for Eastern and Southern Africa. “In addition to provision of support to the target communities, the SLDP can inform the design and implementation of future community-level development programs in Sudan and elsewhere.”