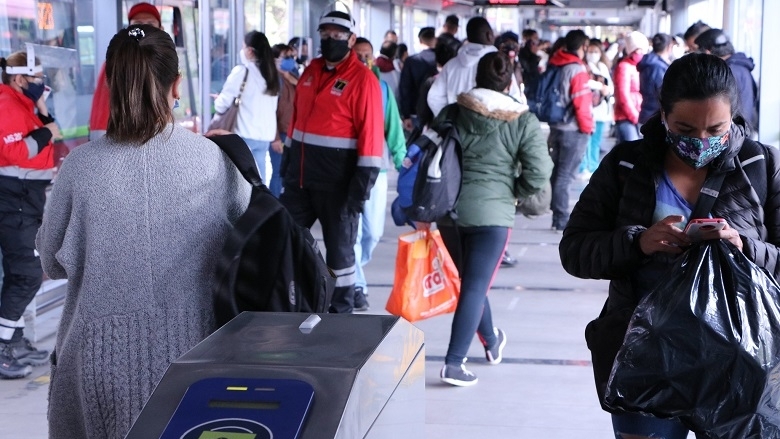 Transmilenio passengers in Bogotá during the pandemic

Countries such as Chile and Colombia are increasingly replacing fossil fuel-powered buses with battery-powered vehicles thanks to innovative business models that can be replicated around the world, according to a recent report by the IFC and C40

Amid the gloomy news about the worsening and prolonging of COVID-19, Latin America has a reason to hope: the region can inspire the world to increasingly adopt electric buses, which will ultimately help post-pandemic cities become more sustainable. This is among the main findings of the study Leading a Clean Urban Recovery with Electric Buses – Innovative Business Models Show Promise in Latin America, by the International Finance Corporation – IFC (the World Bank Group arm for the private sector) and C40 (a network of cities committed to curbing climate change).

The document highlights the significant progress made by countries like Chile and Colombia. In Santiago, 776 electric buses are in place, all of which operating under private contracts. Additionally, the City of Bogotá announced in January it will update its Transmilenio fleet with 596 new buses, thus totaling 1,485 battery-powered vehicles (“the largest electric fleet outside China”, local authorities emphasized; the Asian country features almost 98% of the planet’s e-buses).

According to the authors, Anthony Courreges (from IFC) and John Graham (from C40), Latin America’s secret lies in innovative public-private partnerships (PPPs) or concessions models in which the

fleet providers finance, procure, own and maintain the equipment, and provide e-bus fleets to operators or municipalities under stable long-term contracts, thus “unbundling” ownership and operation. “The ‘unbundled’ model allows all parties to do what they do best,” says the report.

This model is different from the ones found in most of world’s cities, in which buses are owned by either a public authority or a single private operator, which procures, operates and maintains the fleet as per contract requirements. “For different reasons, neither of these players is ideally positioned to lead a large-scale, investment-led transition to electrified fleets without changes to underlying business models," argues the study.

This is all the more worrying considering the impact of COVID-19 on municipal transport agencies.

Between March and April 2020, public transit ridership was down 70-90 percent on average, causing revenues to fall, while the costs of additional safety and sanitation measures have significantly increased. In Brazil alone, for example, the Transformative Urban Mobility Initiative (TUMI) indicated that urban transport systems were losing as much as $1 billion Brazilian reais (roughly US$190 million) on a daily basis just to keep the system running.

In an environment where traditional players are unable to lead the transition to e-buses, commercial models such as leasing – which is already a key component of successful fleet operations in other industries such as freight, train cars, and aircraft – could help cities update their fleets with less risks and greater chances of success, according to the report.

Despite the numerous challenges, there are good news: as the costs of acquisition and operation drop, e-buses are increasingly emerging as a cost-effective alternative to fossil fuel-powered buses.

“While e-buses and associated charging infrastructure can still be as much as two- to three-times more capital-intensive, (up-front) as equivalent diesel bus options, battery costs and annual operating expenses are falling. The performance and reliability of e-buses are also improving fast. Manufacturers are producing lighter, more efficient buses with longer battery life and more reliable performance backed by better warranties,” says the report.

The authors add: “At the same time, transit agencies are taking note that the total cost of ownership (TCO)—which takes into account up-front capital investment as well as operation, maintenance, and other indirect costs over the life of the asset—for electric buses has already reached parity with diesel buses. Taking things a step further, when the calculation includes air quality improvements and the reduction to greenhouse gas emissions, the scales tip further in favor of e-buses.”

The report identifies risks and opportunities that are similar to those faced a decade ago by solar and wind energy sector players. Solar and wind capacity grew ever since thanks to improved technology and gains of scale.

“With the brute force of technology, track record and scale of production, the same will happen with the e-bus market, driven by governments wanting to clean their transit systems and a host of private sector stakeholders (including investors, banks, manufacturers and insurers) wanting to invest in the sustainable infrastructure space. The trick is to align this complex network of stakeholders in order to create competition, transparency and reasonable returns for the parties involved," the authors say.

Creating a sustainable mass transit was already crucial before the pandemic, when cities were starting to face the impacts of climate change - such as more intense droughts or rains -, and it will be even more so in the near future, in which stronger and safer infrastructure will play a pivotal role in the post-pandemic recovery.