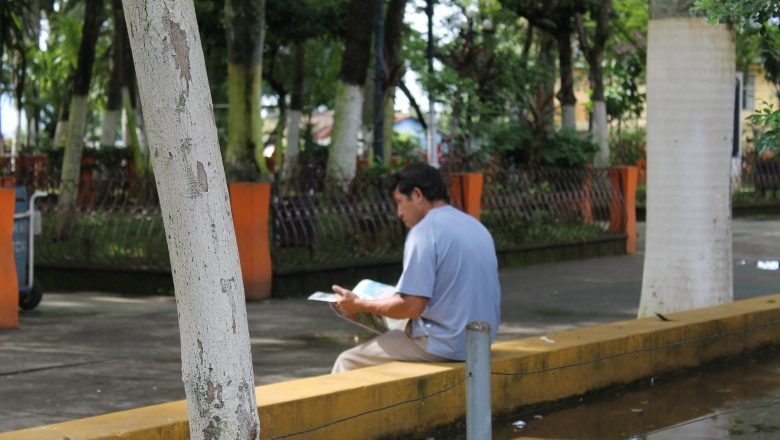 Since the middle part of the last decade, El Salvador has carried out comprehensive health reforms. Among other issues, the government began to focus intensively on a looming national health challenge: the rising incidence of non-communicable diseases[1] across the country. Indeed, as one study subsequently reported, “non-communicable diseases are a leading cause of early death among the adult Salvadoran population.”

El Salvador’s own 2015 National Survey on Non-communicable Diseases (NCDs) in the Adult Population –which the World Bank helped fund– revealed high levels of factors that can trigger non-communicable diseases, such as sedentary lifestyles, at-risk drinking, smoking, poor nutritional choices on salt, sugar or highly processed foods. For example, the survey confirmed that nearly 94% of Salvadorans nationwide consumed few fruits and vegetables, and almost as many consumed high levels of sugar-sweetened beverages. The study also showed a relatively high prevalence of overweight and obese adults.

Moreover, the survey shined a light on the widespread and growing prevalence of chronic kidney disease. About 12% of El Salvador’s population has the disease, in particular a non-traditional form unrelated to typical risk factors: diabetes and age-related kidney degeneration. This non-traditional form of chronic kidney disease has increasingly shown up in Salvadorans in their 30s and 40s, which is unusually young for this disease. It is associated with hypertension, consumption of anti-inflammatory medication, insufficient hydration, and exposure to agrochemicals in many Salvadoran work environments.

“It’s a silent problem, mostly among young men, an increasing number of whom need dialysis for the rest of their lives,” says World Bank senior economist and project leader Amparo Elena Gordillo-Tobar. “This is very expensive for the country and, of course, it’s unfortunately reducing the quality of life and lifespan of many people.”

El Salvador’s experience is hardly isolated. Globally, about 41 million people die each year from non-communicable diseases –representing 71% of all deaths. Also, NCDs are the leading cause of death for countries at all income levels, though low- and middle-income countries are least equipped to combat them.

So, in 2018, El Salvador set out to grapple with its own struggle against non-communicable diseases. To help, the World Bank, in collaboration with Access Accelerated (a partnership of over 20 biopharmaceutical companies committed to helping achieve the Sustainable Development Goal target of reducing premature deaths from NCDs by one-third by 2030) supported the Ministry of Health’s preparations of a project named “El Salvador Addressing Non-communicable Diseases.”  The project included pilot initiatives in three selected regions of the country to “improve the prevention, early detection, and treatment of cervical cancer as well as the prevention of NCD risk factors.”

Through this program, the government of El Salvador received more than 86,000 human papillomavirus (HPV) screening tests and nearly 30,000 doses of HPV vaccine, which prevents cervical cancer. It has also provided funding for health worker training, community outreach and a suite of health tools to provide basic non-communicable disease services for women.

The arrival of the COVID-19 pandemic in the first months of 2020 put the Ministry of Health’s normal activities on hold and diverted supplies and staff to the outbreak response.

Despite the disruptions, the program still conducted dozens of workshops on comprehensive approaches to non-communicable diseases, training for thousands on counseling, nutrition, mental health, early diagnosis, and pharmacological and non-pharmacological treatment. The pilot project has also produced comprehensive guidelines for dealing with NCDs.

“The Ministry of Health is responsible for the hands-on implementation of the pilots,” says Gordillo-Tobar. “We –the World Bank and Access Accelerated, that is– advise and provide financing.”

The World Bank’s work on health in El Salvador on non-communicable diseases was a continuation of its efforts to give momentum to the country’s earlier, ambitious national reforms, which were guided by the idea that everyone has a right to health care.

Starting in 2009 and over the next decade, the reforms led to substantial investments in health and to a new Comprehensive Primary Health Care strategy designed to bring health services closer to the poorest and most remote communities. In 2011, the World Bank made US$80 million available to El Salvador through its Strengthening Public Health Care System Project, which was successfully implemented between 2011 and 2018.

Though inequalities and gaps in the availability of health care remain in El Salvador, many of the country’s investments in health have paid off. Among other gains, child immunization rose, as did the percentage of births in formal health facilities, and there were significant and encouraging declines in maternal and infant mortality. In fact, El Salvador was the only country in Central America to achieve the fourth Millennium Development Goal by reducing its under-5 mortality rate to 17 deaths per 1,000 live births, well under the target of 20.

“The primary health care network in El Salvador is well developed,” Gordillo-Tobar says. “Not perfect, but the structure is there. Even in the small towns. The question now is how to use that structure better to provide integrated care that prevents, detects and treats non-communicable diseases. El Salvador is wisely using the pilot projects to expand knowledge about NCD care across the country.”

[1] Diseases that are not transmissible from one individual to another such as cancer, diabetes, Alzheimer’s, stroke, and many others.