Leading the Way in the Federated States of Micronesia: Maybelline Andon-Bing 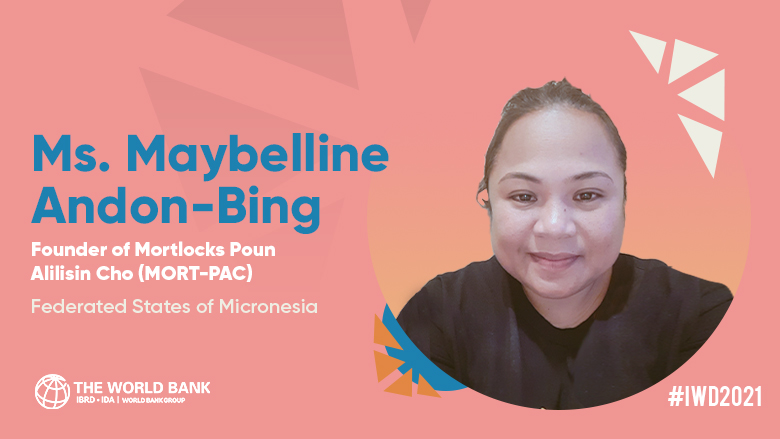 For International Women’s Day 2021, we’re sitting down with women across East Asia and the Pacific who are taking on leadership roles and working towards an equal future in a COVID-19 world. Ms. Maybelline Andon-Bing is the founder of Mortlocks Poun Alilisin Cho (MORT-PAC), a non-government organization (NGO) that seeks to enhance public awareness about civic rights across Micronesia. As the former Secretary of Finance in the Republic of Marshall Islands, she advocates for good governance in development to build stronger and more equitable communities.

I was raised in a household where our discussions often focused on governance and corruption. Growing up, I heard rumors about how public officials had built houses from public funds. That bothered me, so when I was 10 years old I decided to write a letter to the President of the United States to express my concern!

The reality is that there’s so much need. We have poverty here in the islands, so we need to advocate and educate the public so they can know their rights. There is a gap between those that are well off and not well off. We still have a lot of development areas that have not yet been addressed.

I advocate for good governance because it is the key to everything. We have many people in our population that need the help – from children to the elderly. That’s what drives me and that’s why I started Mortlocks Poun Alilisin Cho (MORT-PAC).

You were previously the Secretary of Finance in the Republic of Marshall Islands. What were some leadership lessons you learned in that role?

Collaboration is key. If you don’t have the team, you can't do anything successfully. Once, in a Ministry of Finance forum, I asked my staff to imagine themselves as part of a basketball team. I said, “I can't do all the throws – someone has to dribble the ball all the way down and you have to pass.” At the end of the day, it comes down to teamwork.

If you make a mistake, accept it – but learn and move forward with it. It’s a never-ending process. You're never going to perfect it. And all you can do is try your best.

Is there a female leader in your life that inspires you?

My mum has been an inspiration from the very beginning. She pushes me to do my best, but also reminds me not to let my head get big! She taught me never to do it for yourself;  remember that you’re playing for everyone.

A woman in leadership that I’m inspired by is the former President of the Marshall Islands, Hilda Heine. It’s rare to see female leaders in the region, so it was a big milestone to have a female president. It demonstrated to women who want to be in leadership that nothing is impossible. You could do it if you work for it.

What do you think needs to be done to ensure that more women end up in leadership positions in your country?

It starts with education and public awareness. The culture of “you’re a woman so you can’t be in this position, it belongs to a man” is still very strong in some communities. We need more examples to say that women aren’t just here to take the positions for the sake of it. We have some of the most brilliant brains, especially on the female side, that could complement what we have been used to for the past 40 years in government. It’s always good to maximize what we have.

What do you enjoy most about your work?

I enjoy making a difference. I can’t solve all the problems, but when I see something that needs fixing – the low hanging fruits – I like to go in and fix them.

I enjoy seeing people being happy. Instead of gaining for yourself, you gain by helping others. It’s deeply rewarding. That’s what gives me satisfaction. That’s what drives me.

I started my NGO to help people, so I want to focus on that and building it to be sustainable long term. I want to continue to advocate for public awareness on good governance in development.

Ultimately, I seek to leave a legacy of someone who helped and served. Back in Chuuk State [in Micronesia] we have some of the loveliest people, but the governance is not very strong. We have poor infrastructure and roads that are not yet completed. When I was young, I used to look out the car window and imagine that I would have the power to clean up the area and make the roads better.

When I think about that, I realize how I wanted to help the community; even at a young age. When I went to college, I wanted to major in political science. But my dad said, "Never get into politics, it's dirty." So I didn’t.

But now, I think, if you have the heart of a servant, why not? I would really like to get into politics in the future. I can’t fix every problem, but I can contribute to solving them. I don’t want to be a politician for the sake of doing so – I want to do it to help address some of the frustration I have seen. Not for the sake of myself, but to help others. That’s the ultimate goal.

Follow World Bank Pacific on Facebook to make sure you don’t miss any of our Pacific Women in Leadership series.

**The views expressed in this interview do not necessarily represent the views of the World Bank Group and its employees.