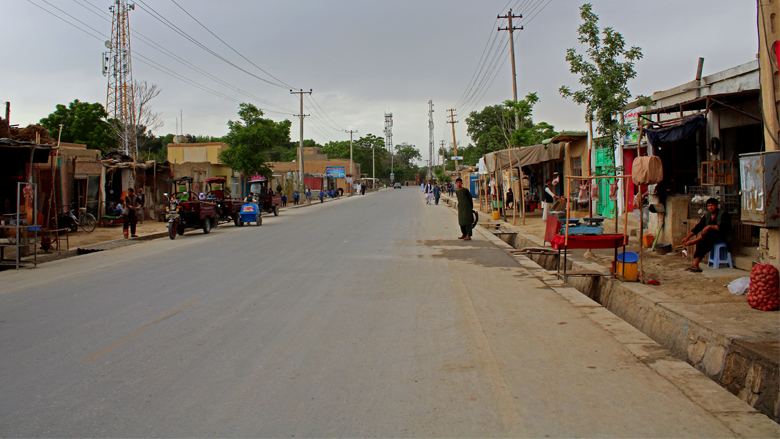 Thousands of rural residents of Dehdadi district in northern Balkh province can easily community to the center of the district benefiting from newly upgraded road with support from ARTF and World Bank.

DEHDADI DISTRICT, Balkh province – A group of teenagers are riding bicycles on the flat concrete street, while a few others are standing around Mohammad Hassan, 42, listening to his stories. Hassan and his listeners are in front of his tiny grocery shop in Pul-e-Babo village in Dehdadi district, Balkh province.

Sitting on an iron chair, Hassan flicks his dark red prayer beads and earnestly shares his recollections. He recalls the days when the street in front of his shop was unpaved and full of stagnant puddles during the rainy season because there was no drainage system. Time and time again, he and other neighboring families had to think of different ways to get rid of the standing water. Sometimes they would drain the water with small buckets and other times they would just wait for the earth to absorb it.

“Just a small amount of rain would make standing water and mud on the street,” he recounts. “At that time, passing the street was not easy for people and sometimes even for cars because of the mass of puddles and mud.” Hassan, a father of three, has been a shopkeeper in Pul-e-Babo village for seven years. “In the summers, the weather was dusty and the dust would sit on my goods. People were not interested in buying dusty goods from my shop.”

Hassan and his neighbors have a very different view today. The construction work was implemented by the Community Development Councils (CDCs) of Pul-e-Babo and Dehdadi Kohna villages, under the Afghanistan Rural Access Project (ARAP).

The work, under the supervision of ARAP engineers, started in June 2017 and was completed within four months at a budget of 3.5 million afghanis (about $49,000). Many commute daily to their workplace and the markets.

Mohammad Shafi, 52, chairperson of the Dehdadi Kohna CDC, says he is pleased that the street is now paved, adding that most of the villagers are farmers and laborers who could not have made this happen without ARAP support. “In the past, we had to wear boots to cross the street. Now we’re fine with just slippers throughout the year,” says the father of seven. “Sometimes it flooded in houses because of the huge amount of water on the street. Now, there is a drainage system and we don’t have that problem anymore.”

An added bonus of the newly paved Pul-e-Babo street is the improved access to the historical site of Khan Aqa-e-Kalan, which attracts visitors during special occasions, such as Eid. With the street now paved, shopkeeper Mohammad Hassan hopes for more visitors to the historical site as it might increase his sales. “In the past, [not so many] people came here because of the bad road conditions,” he says. “I’m sure they will be more likely to come now that the road is paved and travel is easier for all of us.”

"We have the full cooperation of residents and the local government when we implement our projects. Our work has been successful with their support and encouragement."
Abdul Qayoum Rahimi
MRRD provincial engineer, Balkh province 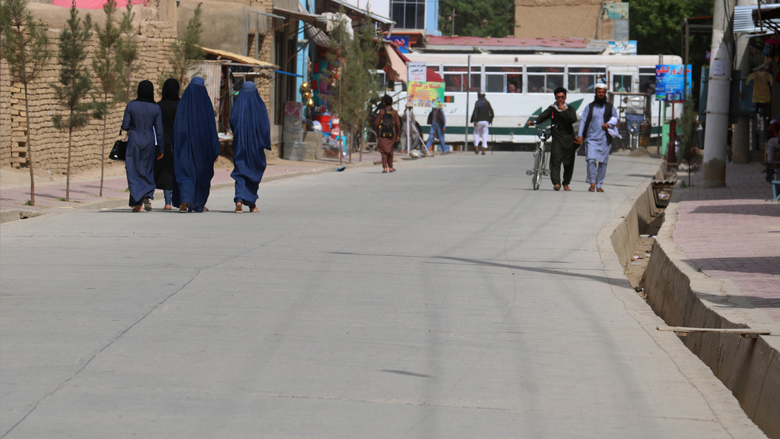 Under the Afghanistan Rural Access Project (ARAP) hundreds of KM of rural road and bridges are rehabilitated enabling people to have easy access to basic services such as health care and education.

ARAP was implemented by the Ministry of Transport and Ministry of Rural Rehabilitation and Development (MRRD) and coordinated by the Ministry of Finance. It aimed to improve access for rural communities across Afghanistan to basic services and facilities through all-weather roads. It was a follow-on project of the National Emergency Rural Access Program and was supported by the Afghanistan Reconstruction Trust Fund (ARTF) and International Development Association (IDA), the World Bank Group’s fund for the poorest countries.

A 13.3-kilometer road is being graveled, which will reduce travel time to essential services and facilities for many villagers.

Abdul Qayoum Rahimi, MRRD provincial engineer in Balkh province, points out the importance of local cooperation for the project’s success: “We have the full cooperation of residents and the local government when we implement our projects. Our work has been successful with their support and encouragement.”

Sayed Mustafa, chairperson of Dehdadi district CDC, cites the work on Pul-e-Babo street, which gave short-term employment to many villagers. “Concreting the street not only solved many issues, but it also helped many families earn an income.”