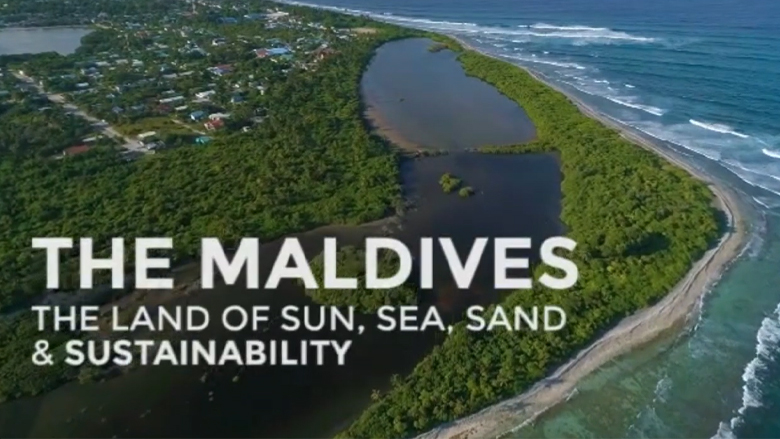 Maldives- The Land of Sun, Sea and Sand

Maldives- The Land of Sun, Sea and Sand, will become a #SIDS nation that is leading the way in showcasing energy sustainability to the world.

Like most small island nations, development in the Maldivian archipelago is severely constrained by the absence of land-based mineral resources and the limited scope for expansion of many economic sectors.

With their sandy beaches and turquoise waters, these tiny islands scattered across the Indian Ocean are globally renowned as an upmarket tourist destination. Naturally, tourism, along with fisheries, constitute the country’s mainstay. These two sectors directly contribute to the majority of its Gross Domestic Product (GDP) at almost 31 percent.

In 2004, the Maldives’ worst fears were realised when the Asian tsunami wiped out the nation’s economic and social infrastructure (around 62 percent of GDP). As one of the most vulnerable nations to climate change, the Maldives remains particularly vulnerable to natural disasters and environmental hazards. The nation’s dependence on international tourism and global trade means that even the tiniest fluctuations in the world market are felt across the Maldivian economy.

Successive governments have sought to mitigate the adverse impact of these external factors on the country’s economy through diversification. But the economic vulnerabilities have once again been laid bare by the COVID-19 pandemic. Tourist arrivals stopped at the end of March 2020 and with that government revenues virtually dried up. Recovery is expected to take longer than the aftermath of the 2004 Indian Ocean tsunami, with tourism projected to reach pre-COVID levels only in 2023.

But the Maldives is already working to seize the opportunity presented by the current crisis: the chance to build back better and greener.

In late November, the government launched a five-megawatt solar project that will support the Maldives in moving closer towards its renewable energy targets, as part of the World Bank-funded Accelerating Sustainable Private Investments in Renewable Energy (ASPIRE) project. The power purchase agreement (PPA) signed with Thailand-based company Ensys Co. Ltd., will see solar grids deployed across the picturesque Hulhule'-Hulhumale' Link Road, which connects the capital Male’ to the main airport and a satellite town through a sea bridge.

The Power Purchase Agreement (PPA) signing for the five megawatts is a significant milestone in the price of energy for a solar power project. A similar project in 2017 received bids for US$ 21 cents a kilowatt hour (without battery), while under this project the cost of a kilowatt hour is down to US$ 10.9 cents. This is one of the lowest prices for an island nation. Even with the most efficient technology for diesel, power costs nearly US$ 23 cents and could go up to US$ 33 cents.

“Government of Maldives has long-term sustainability and independence from diesel-based power generation at the forefront of its national policies. The opportunity for scaling up renewable energy across the Maldives is immense as it can provide the government budgetary relief,” says Minister of Environment Dr Hussain Rasheed Hassan.

"Government of Maldives has long-term sustainability and independence from diesel-based power generation at the forefront of its national policies. The opportunity for scaling up renewable energy across the Maldives is immense as it can provide the government budgetary relief."
Dr. Hussain Rasheed Hassan
Minister of Environment

Maldivians have enjoyed universal access to electricity since 2008, but the heavy reliance on imported diesel and isolated island-based grids has driven up the costs of electricity generation. Even with subsidies, which add to the government’s fiscal burden, electricity tariffs are among the highest in the South Asia region. This high cost places an additional burden on households.

Private sector investment is crucial to achieve the government’s ambitious goal of raising the share of renewable energy in the national energy mix by 20 percent by 2023 and ramp it up to 70 percent by 2030. Achieving this will require generating strong levels of market confidence that the Maldives are receptive to investment, and that they are open for business. The Maldives is already on the right track to do this and has attracted tremendous enthusiasm from investors. More than 60 international bidders expressed interest after the government opened invitation in January 2020 for prequalification for solar PV systems in select islands.

“The Maldives story has always been one of resilience. Time and again, we have seen the Maldives face against its climate vulnerabilities and external shocks, only to re-emerge stronger. With the COVID-19, it has become even more critical for the Maldives to attain energy independence sooner rather than later,” says Faris. H. Hadad-Zervos, World Bank Country Director for Maldives, Sri Lanka and Nepal.

“ This not only showcases the viability but also creates a roadmap that other Small Island Developing States can work with.”

As a trusted development partner, the World Bank is helping the Maldives reduce fossil fuel consumption in the power sector and mobilise significant local savings for a fast-paced recovery and achieve prosperity for generations of Maldivians.