Continued international aid, including through the Afghanistan Reconstruction Trust Fund (ARTF), is vital to create better lives for millions of Afghans and sustain development gains. The #ProtectTheGains series highlights ARTF projects that have made a real difference toward achieving a more prosperous, inclusive, and peaceful Afghanistan.

BAMYAN CITY, Bamyan Province – Nestled among a sea of traditional homes built of mud and straw is Haider Abad’s only beauty salon. Inside the unassuming mud brick house, a thin curtain reveals a large room complete with the latest beauty necessities—hair removal threading, cutting and styling scissors, eyeshadow palates, blush and foundation compacts—neatly stacked on a converted desk that serves as a vanity.

The co-owners of the salon in Haider Abad neighborhood in the provincial capital, Bamyan are budding entrepreneurs. They had seized a business opportunity and are making a success of their beauty salon, which is also teaching them valuable skills in money management. “In a month, we earn between 2,000–5,000 afghanis (about $26–$66)*, sometimes less,” says one of the owners. “When we earn more, we save the rest in case we have problems in the future.”

This salon did not exist two years ago, but thanks to a micro-loan of 5,000 afghanis from the Haider Abad Village Savings and Loan Association (VSLA), two enterprising women created their business, providing a new service to the community.

Haider Abad VSLA was one of 524 VSLAs that were established in five provinces (Balkh, Bamyan, Herat, Nangarhar, and Parwan) with support from the Afghanistan Rural Enterprise Development Project (AREDP).

AREDP, which closed in March 2018, was implemented by the Ministry of Rural Rehabilitation and Development (MRRD). The project worked to enhance economic mobilization and activities by organizing the rural poor into Savings Groups (SGs), VSLAs, and Enterprise Groups. SGs were federated into VSLAs, which could provide larger loans to members.

AREDP was supported by the Afghanistan Reconstruction Trust Fund (ARTF), managed by the World Bank on behalf of 34 donors, and the International Development Association (IDA), the World Bank Group’s fund for the poorest countries.

Efforts to increase the social and economic empowerment of poor, rural women are continuing under AREDP’s successor, the Women's Economic Empowerment Rural Development Project (WEERDP), which is working to increase women’s participation in community-level institutions. The MRRD project is also supported by ARTF and IDA.

"Now we know what to do to be successful, like spending wisely to save and setting suitable prices to repay the loans we take."
Masooma Rasuli
entrepreneur, Haider Abad neighborhood, Bamyan city

AREDP provided 800,000 afghanis ($10,680) in seed money to start the savings and loan program in Haider Abad. A total of 200 households are members in 16 SGs that federated into a VSLA, which receives a percentage of the pooled savings of the SGs.

The SGs and VSLA provide interest-free loans to members, the amounts of which depend on the amount of pooled savings. Committees running these groups are elected and required by AREDP to undergo training on money management and loan repayment.

The Haider Abad VSLA has become a source of women’s empowerment as the association’s leadership and membership are exclusively women. It was the women in the neighborhood who showed interest in the savings and loan program as they did not have other sources of loans.

Alam Behzad, the AREDP provincial coordinator, says that the VSLA program has given new agency to the women of Haider Abad. “Women have been brought into the decision-making process,” he says. “The extra income allows them to make decisions about their future such as what to purchase, how to invest, and what sort of business is needed in the community.”

Successful in their Own Right

A two-time beneficiary of the Haider Abad VSLA, Masooma Rasuli, 37, is an example to other women in her community that they can be successful in their own right within the mainstream economy.

Three years ago, Masooma, whose husband is a farm laborer, received a loan of 3,000 afghanis ($40) to improve her tailor shop. With the improvements, she was able to turn a profit of about 2,000–3,000 afghanis a month.

But the entrepreneur decided to start another business. With a 10,000-afghani ($132) loan, Masooma started a bakery. “I work as a baker for two hours in the morning and two hours in the afternoon, and I run my tailoring business in between. I am working hard because I have seen the benefits,” she says. 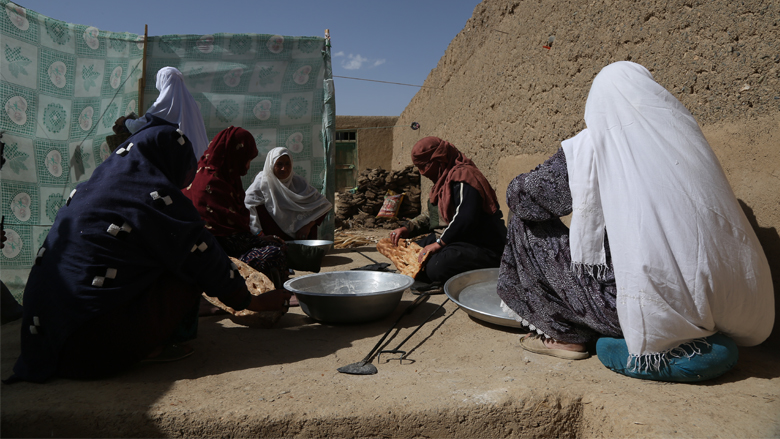 Community based development projects supported by the World Bank and ARTF have left significant positive impacts on the living conditions of rural Afghans especially women who are the bread owners of their families. Photo credit: Rumi Consultancy / World Bank

Masooma is now the primary breadwinner of her household, saving between 4,000–5,000 afghanis a month, after paying for expenses for the household and her five children. She credits her successful businesses to AREDP, which requires borrowers to undergo training in money management and loan repayment. “Now we know what to do to be successful,” says Masooma, “like spending wisely to save and setting suitable prices to repay the loans we take.”