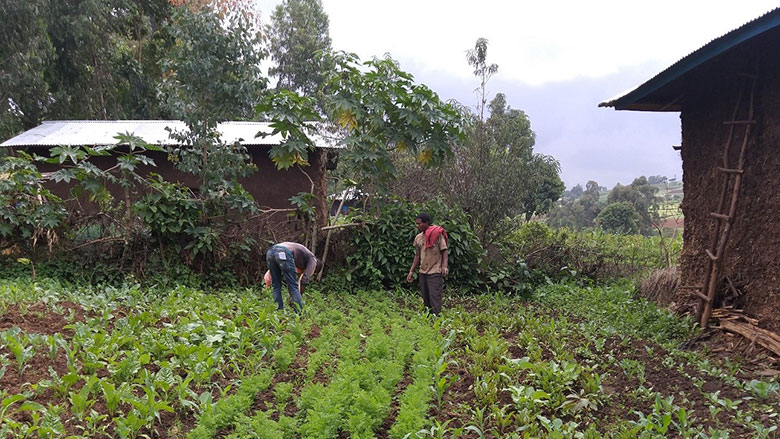 ADDIS ABABA, November 5, 2020 – Yezina Yedemie, 34, her husband Dagne Asmare, 40, and six of their children are residents of Jibgedel kebele. They are among the millions of smallholder farmers benefiting from the World Bank-funded Agricultural Growth Project (AGP).

AGP has introduced nutrition-sensitive agriculture (NSA) initiatives and is encouraging farmers to practice homestead gardening, diversification of crops and livestock for household consumption, as well as agriculture marketing and value chains, increasing smallholder farmers’ access to input and output markets. Prior to the launch of NSA in 2017, communities in West Gojam Zone, where Yezina and her family lives, did not practice vegetable gardening or consume much vegetables. They mostly focused on cereal and pulse production. Accordingly, their diets were not balanced and lacked key nutritious elements including animal protein, resulting in malnutrition and stunting of children.

Today, Yezina leads her family in planting, and tending to her vegetables and fruit garden. After getting seeds, seedlings and cuttings from her local farmers’ training center (FTC), Yezina has planted swiss chards, carrots, cabbage, beetroots, sweet potatoes, pumpkin, banana, mango and avocados in her garden. The AGP also provided Yezina with six, disease-resistant breeds of chicken, training on poultry keeping, cage construction and handling.

“We now have choices of vegetables to cook and supplement our cereal (Injera) and legumes (wot),” Yezina said. “I also feed my younger children eggs along with mashed potatoes following the advice of the health extension workers.”

Yezina’s training and practical demonstrations have helped her grow a flourishing garden that she can harvest all year-round. “AGP has helped me with small-scale irrigation and I have water year-round,” she said “I am now able to sell off the surplus I produce in Bure town and buy what I need for my family. We are witnessing enormous changes in our lives in these two years.”

Haimanot Belew, one of the development agents and irrigation experts in the Jibgedel neighborhood, said he works in collaboration with agriculture colleagues and kebele health counterparts to implement AGP with both men and women, and keeping  gender, NSA and climate smart agriculture (CSA) in mind. The team received a series of trainings in respective topics and have been provided with job aids and manuals by respective sectors.

“Thanks to AGP the farmers and the community are now ripping the benefits of irrigation, inter-cropping, climate resilient crops or forages like Rhodes Grass, post-harvest handling and storages, allowing them to manage climate variability as well,” he said.

For Aschale Asrat, another farmer of the kebele, years of monocropping and food and forage scarcity years are now a distant memory. He says he has rediscovered his palate for diversifications of crops and diets.

"Owing to AGP-developed irrigation, I harvest three times a year and my yields are getting better with every harvest and I am able to provide more for my family. Life is far better today than yesteryear," he said with pride.

Aschale and his wife have joined groups of suppliers of grains and horticultural products to sell at Bure markets.

Jibgedel kebele in Bure district, West Gojam Zone of Amhara National Regional State, is one of the 4,107 kebeles benefiting from the Second Agricultural Growth Project (AGP2). The project is financed by multiple donors including the World Bank, the European Union, Global Affairs Canada, the Italian Development Cooperation, the Royal Netherlands Embassy, the Spanish Development Cooperation, the United States Agency for International Development and Food and Agricultural Organization of the United Nations.