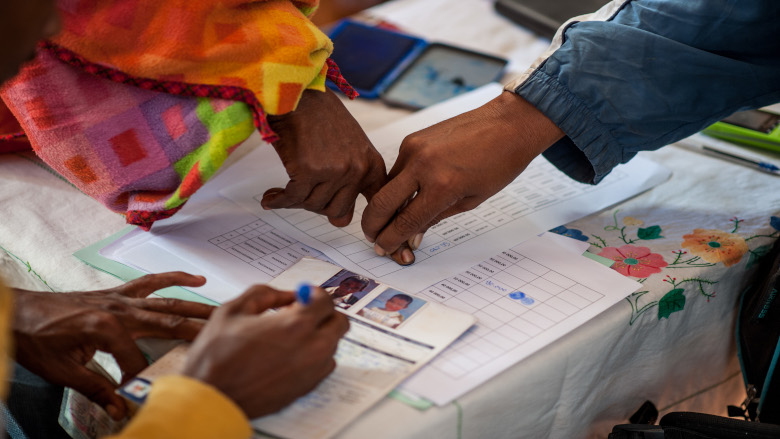 Containment measures enacted earlier this year to stop the spread of COVID-19 in the country’s three most affected cities have directly impacted informal businesses and the most vulnerable households.

ANTANANARIVO, September 22, 2020 – Ralaimoty, 70 years old, has difficulty moving towards the cash box with a piece of wood that he uses as a cane. On this Saturday morning he is at the Alarobia Professional Technical High School near his home in Soavimasoandro, to receive  100,000 ariary (the equivalent of $27) from the government through an unconditional cash transfer program.

The high school was transformed into a vast, cash transfer payment area, where Ralaimoty and his neighbors benefitted from Tosika Fameno, which literally means complementary support. The program was set up by the Malagasy government to help vulnerable citizens in Antananarivo, Toamasina, Moramanga and Fianarantsoa who have been economically affected by the containment measures implemented to stop the spread of COVID-19 (coronavirus.) These four major cities had been hard-hit by the virus; since April, as many as 15,187 cases have been confirmed. There have been 198 deaths.

Before the confinement was lifted, more than 244,000 households from 769 neighborhoods in these four major cities benefited from the cash transfer. These poor and vulnerable households were identified at the neighborhood level. Like Ralaimoty, they are the most exposed to the risk of food insecurity and those whose income was  interrupted due to confinement.

"I live alone, my children have their own lives and live far away from me,” said Ralaimoty. “Before the epidemic, I was already doing odd jobs that my health still allowed me to do. With the confinement, I couldn't go out. I would have starved to death without this financial assistance."

Right behind him, Tsilavina Elia Ratiana also waited her turn to be received at the cash register, with her 9-month-old daughter hanging on her back. The 25-year-old mother is a cleaning lady. "With the confinement, I could no longer go to work, and therefore I no longer received a salary,” she said, relieved for the 100,000 airy with which she will buy food. “My husband is a street vendor and with the confinement, he couldn't go out either. The last month has been very hard for us and our three children because in addition to food, we also have to pay the rent. Our savings quickly dried up and we even had to ask neighbors and families for help. But that wasn't enough because everyone was struggling to make ends meet. My husband and I sometimes skipped meals.” 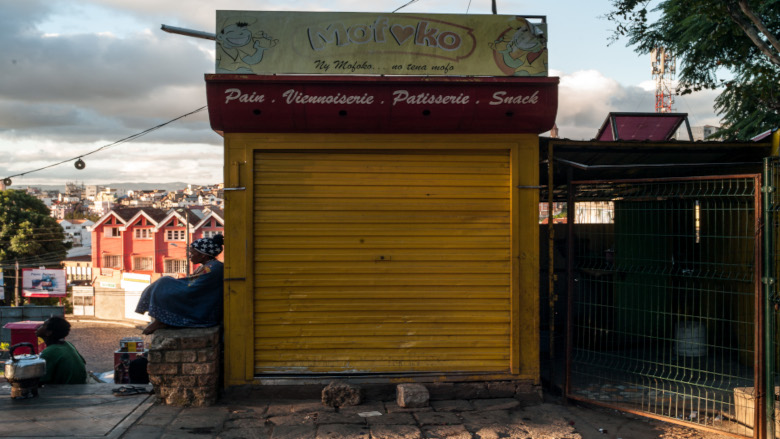 Containment measures enacted earlier this year to stop the spread of COVID-19 in the country’s three most affected cities have directly impacted informal businesses and the most vulnerable households. © World Bank

"During the period of restriction where the incomes of these vulnerable households are affected, social safety nets are a way to help families meet their basic food needs, avoid selling their assets or sacrificing their livelihood to survive, protect their human capital, while respecting the rules of confinement," explained Julia Rachel Ravelosoa, World Bank Senior Social Protection Economist for Madagascar.

Developed by the Cash Working Group, the platform bringing together the government, technical and financial partners and social protection actors of which the World Bank has been a member since its establishment in Madagascar in 2016, this cash transfer program will be extended to prepare the period of deconfinement and the reopening of schools in order to better protect the already fragile human capital. For the World Bank, an additional financing is underway to expand the cash transfer program to more geographic areas and reach more vulnerable people.

"One of the main objectives of the World Bank in the face of COVID-19 is to preserve human lives and livelihoods, especially for the most vulnerable In this context, social protection is the most appropriate tool," said Marie-Chantal Uwanyiligira, World Bank Country Manager for Madagascar. "This response to COVID19 has also made it possible to strengthen use of technology, in partnership with mobile payment companies, to speed up the implementation of the program. This has laid the foundation for greater financial inclusion for these beneficiary populations.”

Since the beginning of the pandemic and well before the introduction of COVID-19 in Madagascar, the World Bank has provided technical and financial support to Madagascar to sustain the country's response to the epidemic in the health, social protection and economic sectors.