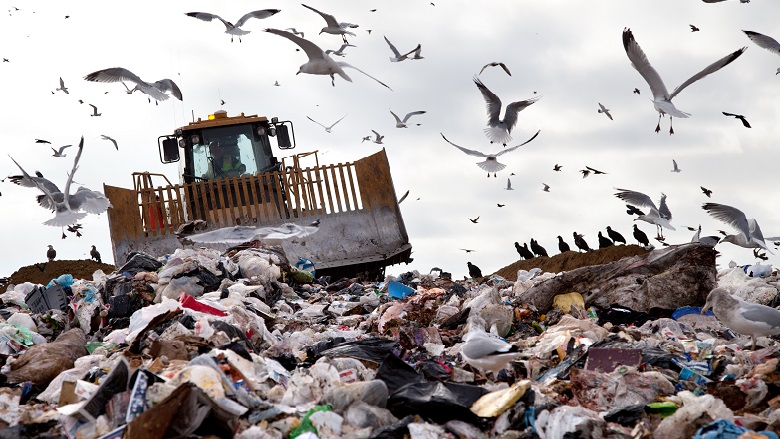 For many in the developed world, trash is an afterthought—an unfortunate fact of life, forgotten once tossed away. But waste can have direct and profound consequences for health, safety, and environmental sustainability, particularly in developing countries with limited resources and infrastructure for treating and storing it.

In Brazil, for example, waste production has increased by about a third since 2003 and communities collect over 216,000 tons of trash every day. Yet only about 59% of municipalities dispose of their waste in sanitary landfills designed to protect the surrounding soil and groundwater and properly collect and treat methane, a powerful greenhouse gas generated by decomposing trash. The rest deposit their waste in landfills with limited environmental controls or in open dumps, placing community members at risk for disease and increasing greenhouse gas emissions. As a result, , approximately the same as the greenhouse gas emissions from 10 million passenger cars driven for a year.

Since 1999, the World Bank Group has created and supported innovative public-private partnerships that aim to make greenhouse gas emission reductions and sustainable development more economically feasible. In Brazil, the World Bank Group recognized the waste management problem as an opportunity to pilot a new approach—one that could transform Brazil’s landfills and increase the country’s capacity for carbon finance by tying landfill improvements and emission reductions to financial investment.

The World Bank’s Carbon Partnership Facility partnered with the Caixa Econômica Federal (CAIXA), the second largest public bank in Brazil, to blend multiple sources of financing and offer them as loans to companies that manage and operate landfills—but only under certain conditions. In order to qualify for funding, landfill operators had to agree to fulfill the rigorous requirements of the United Nations Framework Convention on Climate Change’s (UNFCCC) Clean Development Mechanism and reduce their greenhouse gas emissions by a specific amount each year. As they met the pre-determined milestones, they would receive payment through CAIXA. The interest rate of the loans was linked to their performance: under-delivering could trigger an interest rate increase.

According to Javier Freire Coloma, who specializes in energy and climate finance for the World Bank, the idea was to establish a framework that would incentivize improved waste management and sustain itself.

After a slow start, the CAIXA landfill program took off, reinventing “business as usual” for both CAIXA and for several of the participating landfills.

Between 2012 and 2017, the program earned carbon credits for the reduced emissions from the collection and destruction of methane. As certified by the UNFCCC, three landfills serving the metropolitan regions of Rio de Janeiro and Recife have collected and flared over 150 million cubic meters of methane, the equivalent of over 3 million tons of carbon dioxide (tCO2e) and 2% of the solid waste management sector in Brazil.

“The carbon finance program over-delivered,”  Freire says. “We were able to generate and certify all the emission reductions in the contract a year ahead of schedule.”

Building on this success, one of these landfills will continue to earn carbon credits under a new agreement signed in March 2020. A new municipal landfill in Pernambuco also plans to sign an agreement with CAIXA to participate in the carbon finance program. As part of these new agreements, the landfills will take the extra step of producing electricity from collected methane, displacing electricity usage generated from fossil fuels. This builds on a nine-year public-private partnership with CAIXA to support municipal landfills to integrate methane destruction technologies and to explore productive use of the methane in electricity generation.

Beyond surpassing its emission reductions goals, the CAIXA landfill program also succeeded in inspiring innovation. The financial and technical support allowed the Santa Rosa landfill, in particular, to implement novel waste management technologies, including sensors to monitor groundwater pollution, water recycling facilities, a green belt around the site, and an on-site education center to inform the local community about environmental issues.

The program also helped create a pathway to poverty reduction for waste pickers who were affected by the closure of two local dumpsites that were deemed environmentally unsafe. The landfill program offered them education and vocational training, help with signing up for government assistance programs, and support in preparing business plans and organizing recycling cooperatives.

The success of the CAIXA landfill program has established these environmental and social safeguards as the new standard for landfills across the country, and it has inspired and enabled CAIXA itself to embrace other climate finance initiatives. CAIXA has since become accredited under the Green Climate Fund, providing access to additional development funding. It has also expanded for a national energy efficiency program.

“Brazil’s landfill program is a good example of how the public and private sector can work together to support new approaches to sustainable urban development using climate finance,” says Marc Sadler, Practice Manager, Climate Funds Management at the World Bank. “We are pleased to see the program continue to generate emission reductions on top of the benefits for communities in Brazil.”

An effective model for incentivizing and supporting sustainable waste management could equip communities everywhere to confront that growing problem and the environmental toll it promises to take.