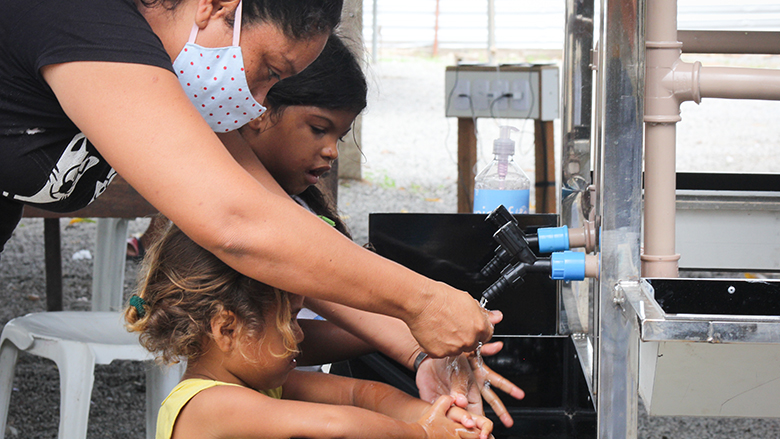 Brazilian children wash their hands in the Northern state of Roraima, Brazil

A new study shows that, without safe water supply at home and in schools, children and adolescents find it more difficult to follow hand-washing guidance on how to prevent COVID-19 and other diseases

Imagine that you are at school and need to use the toilet during the break. However, instead of a flush toilet and a sink, you find a dry non-flush toilet (or a hole in the ground), and nothing to wash your hands with—not even hand sanitizer gel! How would you feel?

Across Brazil, 39 percent of all schools lack basic hand-washing infrastructure, according to the WHO/UNICEF Joint Monitoring Programme for Water Supply, Sanitation and Hygiene (JMP). The situation described above (together with the many negative feelings it might evoke) was the day-to-day in those schools until the pandemic forced us into social isolation. However, things will not have changed when schools reopen, as most of them still lack adequate access to water and sanitation facilities.

A new study by UNICEF, the World Bank and the Stockholm International Water Institute (SIWI) shows that children and adolescents are among the invisible victims of Brazil's lack of investment in water and sanitation infrastructure. For public school students, the situation is even more alarming, as private institutions have more than twice the coverage of these services.

In the North of the country, the disparities are even greater. Only 19 percent of public schools in the state of Amazonas have access to water supply services, while the national average is 68 percent. Sanitation is also critical: in the state of Acre, for example, only 9 percent of public schools are connected to the public sewerage system; in Rondônia, 6 percent; and in Amapá, only 5 percent.

Indigenous peoples are also amongst those most affected by lack of sanitation, as well as people living in favelas (where women are the majority), and in rural areas. For them, it is difficult to follow the most basic recommendation against the spread of COVID-19 and other diseases: thorough hand washing with soap and water.

No Facilities at Home

JMP data reveal that 15 million Brazilians living in urban areas do not have access to safe water, that is, drinking water, protected from external contamination and available at home. In rural areas, 25 million people only have limited access to water from safe sources, but far from their homes.

This is the reality, for example, in the Conceição quilombola community in Bequimão (state of Maranhão), where 16-year-old Aldenice Melo lives. “The well water that supplies the community is not the best. It's brackish. So we have to travel to a neighboring village to fetch drinking water,” she says.

When it comes to sanitation, over 100 million Brazilians do not have access to adequate facilities, which are not shared with other homes, and where sewage is collected and treated in a safe manner. Of this total, 2.3 million still practice open defecation.

“Where I live, not all houses have a bathroom—only a few. Because there is no sewerage system, people tend to use pits, which contaminate the soil,” reports Isabele Silva, 17, from Itaberaba (Bahia).

“It is really hard to have sewage at your doorstep, and not a drop of water at home,” adds Thais Matozo, 20, a resident of the Rocinha community in Rio de Janeiro.

"Because there is no sewerage system, people tend to use pits, which contaminate the soil"
Isabele Silva
17-year-old student

According to the paper released by UNICEF, the World Bank and SIWI, the COVID-19 pandemic exacerbated Brazil's inequalities in access to water and sanitation, and choked even further a sector that already suffered from lack of investment.

The National Basic Sanitation Plan (PLANSAB) estimates that Brazil would need to invest around R$26 billion per year (about 0.4 percent of GDP) over the next 13 years to increase access to water supply to 99 percent, and expand sanitation coverage to 92 percent by 2033. In the past two decades, however, the country has invested only R$12 billion per year, less than half of what was needed. In addition, investment is uneven and is mainly concentrated in the Southeast and South regions.

The paper also maps some sectoral actions in response to the COVID-19 crisis. For example, most water utilities have stopped suspending services for customers who defaulted on their bills, and have not been charging poor families for their consumption, while others have joined forces with municipalities to keep public spaces disinfected. In some metropolitan areas, they also helped to build public washbasins.

“In the North, water and sanitation utilities are collaborating with humanitarian actors (for example, the UN and NGOs) in ensuring access to handwashing facilities in shelters for migrants and refugees, spontaneous settlements, and public spaces. Water trucking is supplying a number of these hand-washing stations to ensure an adequate supply of drinking water,” describes the study.

Much more would have to be done, but the pandemic has led to a reduction in these utilities' revenues (as fewer people are paying their bills), as well as a rapid increase in their expenses. “According to some studies, water and sanitation utilities lost up to 70 percent of their revenue in the first weeks of the pandemic, which means that the economic burden of their financial liabilities can reach unsustainable levels," says the report. As a result, they may face further difficulties in maintaining the standards of services provided to the population.

In order to ensure that water and sanitation services continue to reach the most vulnerable, the study makes several recommendations. A key one is the creation of financial assistance packages for water and sanitation utilities to implement contingency and recovery plans, based on clear performance targets.

The technical paper produced by UNICEF, the World Bank and SIWI also recommends greater cooperation among the government's water and sanitation, health and education sectors. Finally, it advises collecting reliable data to inform better policy making, taking into account, in particular, the lessons learned from the pandemic.