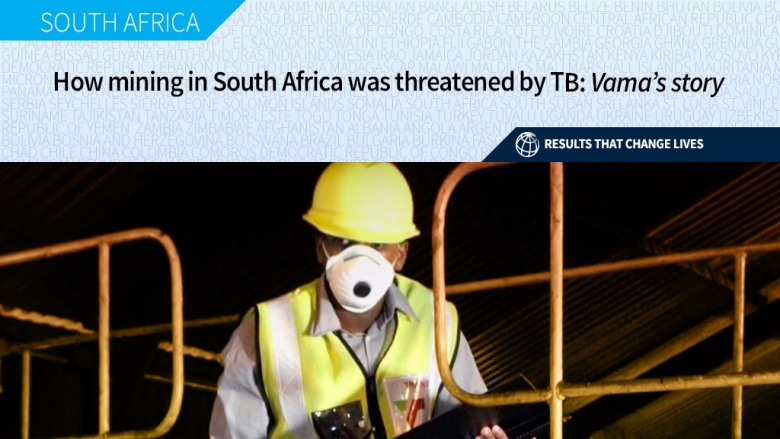 For Vama Jele, mining is a family affair. His father was a mineworker. Four brothers currently work in mines in South Africa. And for 17 years, he worked in the mines of the rural Nhlangano District in Swaziland.

The Jele brothers are some of the half a million mine workers who drive one of the most important industries in Southern Africa. South Africa has the third largest mining industry in the world, where more than 2,000 mines contributed about 8 percent of the country’s GDP in 2016.

For decades, the mining industry, and workers like Vama, have contended with an unseen danger: tuberculosis—an infectious disease that is spread through the air. With 2,500-3,000 cases reported per 100,000 individuals, TB rates in the South Africa mining sector were 10 times higher than what the World Health Organization (WHO) considers an epidemic emergency, making the mining sector a major “hotspot” of high TB transmission. Two of Vama’s four brothers are being treated for TB.

The World Bank worked closely with the Government of South Africa, the Global Fund to Fight AIDS, Tuberculosis and Malaria, the UK Department for International Development, and research institutions such as Stop TB Partnership, International Organization of Migration, and US Centers for Centers for Disease Control and Prevention to coordinate a sub-regional response to the ongoing TB outbreak.

The program includes better screening and treatment for mineworkers who have been at risk of TB. From 2015 to 2017, 90 percent of all mineworkers were screened for TB, and those found to be infected were put on treatment. The program also established services and compensation for ex-mineworkers and improved tracking systems, including the first cross-border disease database in the world.

Crucially, the program established better coordination between countries in Southern Africa and others who send labor to the mining industry. Before the new framework, TB protocols varied greatly country-by-country, resulting in high drop-out rates and contributing to high burdens of disease, including the rapid spread of multi drug resistant TB, in mining communities and those who sent mine workers. Now, public, private, multilateral, and bilateral partners across several countries are aligned around a single framework to manage the disease and prevent future outbreaks.

But perhaps the most important aspect of the program was the involvement of the mineworkers themselves, including Vama who helped develop the policy. “The World Bank placed mineworkers and ex-mineworkers at the center of its interventions and assisted them to develop their own solutions,” he said.

That aspect of the program will continue to benefit communities across Southern Africa long after the most urgent public health aspects have been addressed. With the capacity I have gained,” Vama said, “I can now advocate for the voiceless, those in the shadows of life, and those who passed away.”