A Lifesaver in Times of COVID-19: Face Masks Made in Post- Conflict Central African Republic 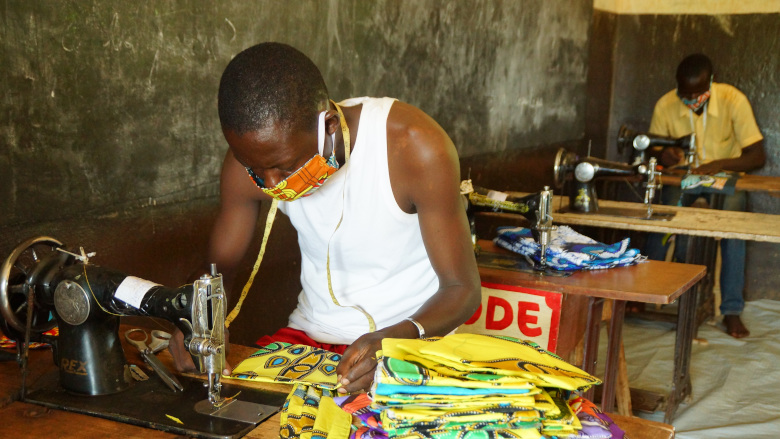 The Central African Republic is planning to produce 10 million masks and distribute two free masks for every citizen.

BANGUI, August 3, 2020 – Beautiful African print face masks are now available for free distribution in the Central African Republic. Just two months ago, most citizens and health care workers were struggling in getting protective masks as the country was confronted with the spread of coronavirus cases.

Years of prolonged violence and conflict have ravaged the country’s weak health care system, and the COVID-19 (coronavirus) crisis is now shaking the economy and fragile stability, potentially pushing more than 140,000 people into extreme poverty according to recent World Bank estimates.

As the government stepped up its health response to the pandemic, the Central African Republic was one of the first countries on the continent to mandate the use of facial masks. And, like many countries around the world, was faced with a real dearth of masks in local and international markets. In countries where social distancing and confinement are difficult to impose, masks are an essential element of the response. Extraordinary times required an extraordinary solution. Ten million masks needed to be locally produced with standards respecting World Health Organization guidelines. In record time, the LONDO project («stand-up» in Sango) - currently the largest cash-for-work program in the country - was able to produce more than 2.4 million masks so far.

We have met with some of our experts and entrepreneurs who are producing local face masks and creating jobs during the pandemic to hear their story:

“Just two months ago, the Minister of Health Pierre Somsé asked for the World Bank assistance in sourcing 10 million masks that could not be found on the international market. We had to find an innovative approach and we turned to the LONDO project and our partners,” shared Han Fraeters, World Bank Country Manager for the Central African Republic. “What started as a health response with a focus on saving lives by delivering protective masks, also became a response to the economic impact by providing livelihoods to 18,000 tailors who have been recruited and to 300 local firms that have been contracted through the project.” 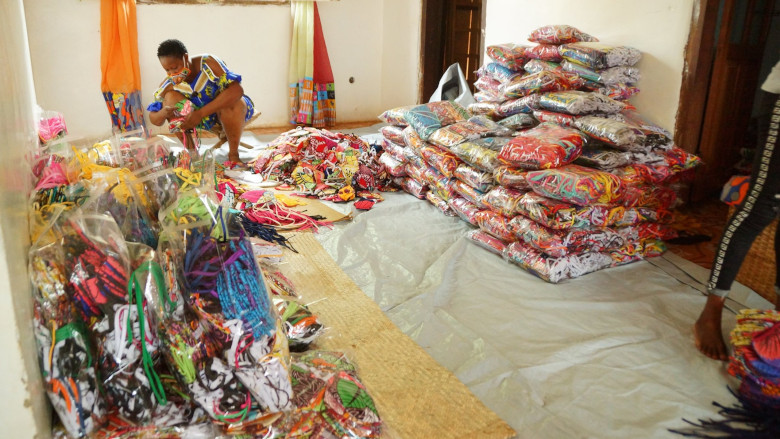 About 300 local companies have been contracted by the LONDO project and will generate more than 1,6 million workdays employment and about $17 million into the local economy

This initiative will generate more than 1.6 million workdays and should inject about $17 million into the local economy. A recent impact evaluation of the project has shown that families see a 10% increase in household revenues and assets even up to 20 months after benefiting from the program.

For Djeina Issa Kalidi, a World Bank social development specialist based in Bangui, “This is the extraordinary solution provided by simply leveraging the local resources available. The LONDO project supports stabilization and social cohesion in a war-torn country through temporary employment. Usually it carries out small infrastructure works and road maintenance, but, in the face of COVID19, it was able to adapt rapidly and change its core activity to the production of masks.”

As COVID-19 disease was spreading in Bangui, the project team had to travel within the capital city to mobilize the various partners, sensitize the team regarding preventive measures, organize service contracts with hundreds of local sewing workshops involved in the production line, facilitate recruitment, supervision, and remuneration of tailors, pressers, and other labor involved in the chain. 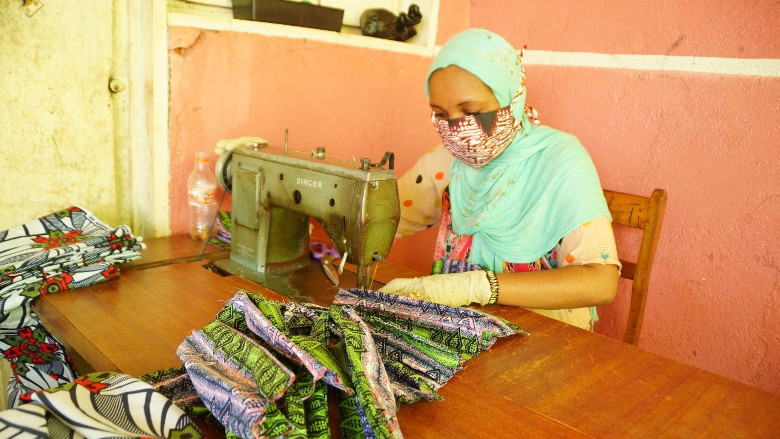 Souleymane is a single mother of four children whose husband was killed walking home from work two years ago by a stray bullet during the arrest of a militia member in the neighborhood. Since then she has been pulling the devil by its tail and was delighted to have found a temporary job.

“I can make up to 700 masks a week, and I am able to earn about 140,000 FCFA per week," she explained. She is a seamstress by training but had not practiced her skills for a long time. She was recruited in June by the COMMODE sewing workshop in the district of PK5 where she lives since she was born.

‘’This seed that they have sown in my life is germinating and will mature durably and invariably,’’ said Amal with a smile. With the money she earned, she started to repair part of her makeshift house where she lives with her children. She plans to use the rest of her savings to open her own sewing workshop one day. 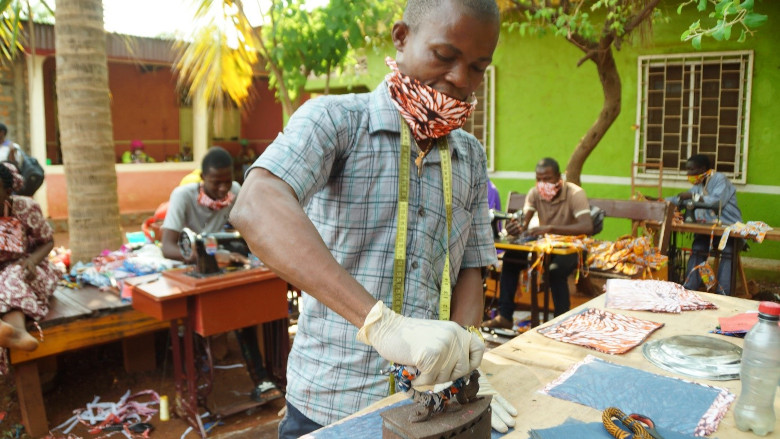 Danoe Benjamin, a young tailor helper from the town of Bégoua, is ironing the different pieces of fabric to give them the right shape. Photo Credit: LONDO Project

At the AEPA sewing workshop in the Boye-Rabe district of Bangui, the small courtyard is buzzing with activity with more than a dozen workstations and sewing machines lined up. About 30 tailors and assistants are at work. In the section of helpers, Danoe Benjamin, 29, who comes from the town of Bégoua, is ironing the different pieces of fabric to give them the right shape. He was recruited to be a helper at the same time as his older brother, who is a tailor in the workshop.

“Here’s where we cut the fabrics according to the guidelines, feet and hands activate the sewing machines, we than iron the Vilene interface with the fabric,” he said, pointing. “We fold everything in plastic bags and the product is finished. The masks come out beautiful and brand new.”

For Benjamin, what attracted him to the job was the urge of being useful and helping the collective efforts against the COVID-19 pandemic. He is now making a good living each week. Coming from a family of 13 children, he dropped out of school in class 3. Without a proper education and without a job, he was left by himself and had started joining a group of young people who engaged in uncivil activities. In the Central African Republic, a large proportion of young people are very vulnerable due to lack of training and jobs. Many get recruited into armed groups and turn to violence.

For Soulemayne, Benjamin, and the citizens who have been hit hard by the pandemic, getting a livelihood is essential to help them secure a better and safer future. Today in CAR, getting money directly to the people and maintaining small businesses is a first step to help prepare for recovery and build peace in the country.