How Can We Increase Women’s Participation in Infrastructure Projects? 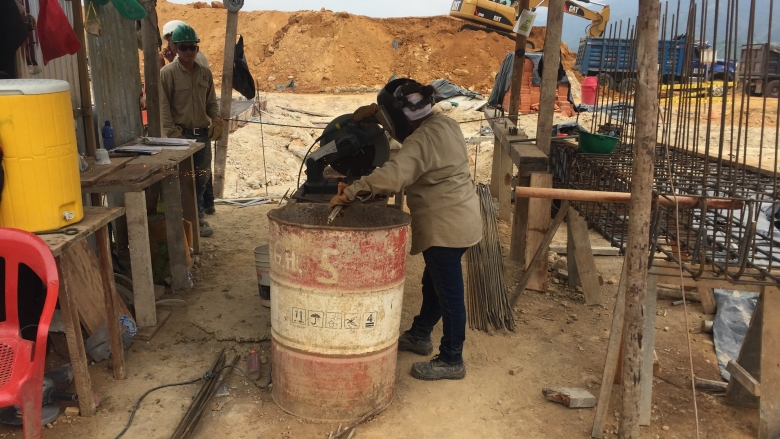 On construction sites, it is more common to see men working than women. With the aim of improving the gender balance in construction, the World Bank is implementing gender strategies in urban transport projects in Colombia. These have  led to the increased participation of women in infrastructure projects.

Gender discrimination not only has a negative impact on women’s income; it also impedes companies and society from making use of the special skills that women contribute to the economy. The implementation of a gender equality strategy in the Bucaramanga Integrated Mass Transport System– Metrolínea – revealed the advantages of including women in this type of project and provided lessons that could be shared with other systems, sectors and projects.

The strategy was to ensure that women would account for nearly 10 percent of the workers hired. It also guaranteed equal wages or remuneration for all workers with the same job duties and that there would be no job duties exclusively for men. Clara Beltrán was one of these women. Fifty-nine-year old Clara forges iron, a job traditionally done by men, for building structures. In the Metrolínea project, she forges iron for beams, panels and walls.

“I think it is wonderful for women to work in construction projects. Just because someone is a woman does not mean that she can be discriminated against in any job, as long as she is responsible in her job, her behavior, and that she earns respect,” said  Clara.

She says that she may be surrounded by anywhere from 20 to 100 men at her job, but the important thing is to do the work well and demand respect.  Clara learned the trade 19 years ago when she went to ask for a job at a construction site and the foreman kindly decided to teach her. On her first day forging iron, she did not earn enough “even to buy a soda,” she said. But the foreman encouraged her and told her that no one was born already knowing how to do something and that she would produce more the following day. And that is what happened; she got experience and became an expert. She produced so much that she even managed to secure more iron bars than any other man in a day.

Nevertheless, after several years practicing the trade, Clara recognizes that there are rude men who lack respect for women. For that reason, she believes that the gender training that Metrolínea and the contracting companies offer at job orientation sessions is innovative and valuable. The training is offered during orientation and on other occasions where male and female workers meet to talk about gender equality, discrimination and violence.

“The training that highlights respect for women is particularly good. I would also say to women that they have to stand up for themselves on the first day, always with respect. I have always told my family, my daughter and my grandchildren that respect is what they give themselves. If someone treats them disrespectfully, they should put a stop to it immediately and demand respect,” said Clara.

The strategy to encourage more women to work in construction originated from the deficiencies noted by the World Bank’s team of social experts and procurement area staff. The initiative not only sought to increase economic opportunities for women but to promote equal treatment, as well as to organize campaigns against harassment and sexual violence.

“Specifically, the idea was to begin to eliminate the vision of gender roles that exists in construction. To eradicate the idea that only men play a role in these projects. Both women and men have the capacity to do the same work, and in many cases, either sex can do it better than the other,” said  Carlos Alberto Molina, World Bank social specialist. “Here we are talking about how to foster equality and how to achieve inclusion so that there are more women on the site.”

This is how the procurement area became a vehicle for promoting equal treatment and economic opportunities for women. It established requirements in the work contracts to enable the inclusion of women and campaigns for better treatment. Metrolínea and the contractors played a key role in achieving this objective.

The activities implemented at the construction sites of the Metrolínea’s Portal de Piedecuesta and Portal Norte led to an increased number of women hired. In addition to the incorporation of skilled workers such as engineers and supervisors, 89 women were hired to fill low-skill jobs typically held by men. This included Clara’s job, as well as those of road assistants known locally as paleteras, security guards, cleaning crews, SISO supervisors and others.

For Trina Rodriguez, a Metrolínea social worker, training and campaigns improved the work environment and even led to changes in attitudes. “Previously, many men did not like to have a woman boss and there were even women who did not want female assistants, but things got better,” said Rodriguez.

The project even made a video in which women and men appear sharing the work and supporting one another to the beat of salsa music. Both the video’s production and the final project served to improve integration. When it is presented during the periodic training courses, it helps break the ice and the workers talk about it.

“The strategy is designed to make the construction workers understand that we can only eliminate gender stereotypes when workers participate in the activities. It is a strategy that transcends the project. We believe that workers who participate in this type of work will have a less rigid view of women when they leave to work on other sites,” said Molina.

Another key lesson was to use gender-neutral language when posting job openings. Rather than saying that a crane operario was needed, for example, the notice read that a man or woman was needed to operate a crane. These minor language changes gave more opportunities to women and avoided masculinizing the position.

For Diomedes Berroa, a World Bank procurement manager for Latin America and the Caribbean, this synergy produces excellent results. “These types of positive experiences show how we are moving in the right direction and that procurements are a useful vehicle for benefiting the most vulnerable through decent work,” he said.

Finally, the commitment and linkage of contractors, the implementing entity and local authorities such as mayors’ offices, are key to ensuring the success of the strategy. Respect for gender equality should begin with the workers but should also come from the leadership of each entity involved.