Why the environment matters to human health 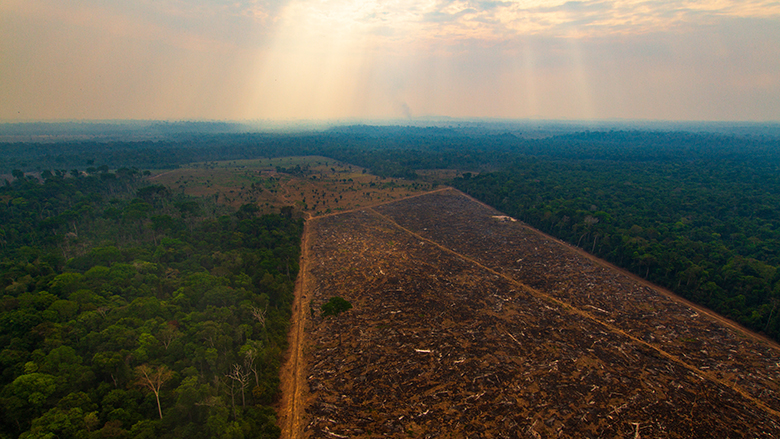 COVID-19 has widened our vocabulary to include words like zoonoses, pathogens, spillovers, and coronavirus, to name a few. But these are not new words for many scientists who research biodiversity and the relationship between human activity and ecological systems.

One of them is Dr. Marcia Chame, coordinator for the Wildlife Health Information Center (Centro de Informação em Saúde Silvestre–CISS) within the Oswaldo Cruz Foundation in Brazil. The foundation is a designated “collaborating center” with the World Health Organization on environmental and health matters. It is also a part of a coalition to accelerate research on COVID-19.  With Global Environment Facility (GEF) funding, the World Bank supported the establishment of CISS in 2012 to identify linkages and disseminate information about the interrelationships between biodiversity and the health of society. The Amazon Sustainable Landscapes (ASL) team spoke with Dr. Chame about zoonoses and solutions for the future. 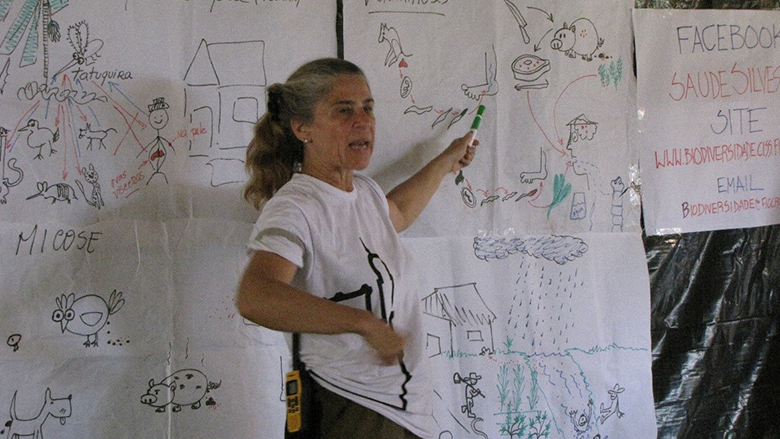 Dr. Chame presenting diverse forms of transmission of zoonoses in the communities of the Tapajós Extractive Reserve, Pará State, Brazil, for discussion and identification of good practices for control and prevention.

How have human impacts on global ecosystems contributed to zoonoses?

Innumerable factors contribute to the emergence of new zoonoses (diseases caused by infectious agents shared between people and animals), or the increase in zoonotic diseases that were previously rare or limited to small areas and communities. Most are related to environmental imbalance, disruption of biological communities, mobility of people and goods, and climate change.

COVID-19, the global viral emergency we are currently experiencing, is just the latest example of zoonoses. Some other commonly known examples include:

The loss of natural habitat and deforestation associated with the expansion of roads, gas pipelines, luxury condominiums, intensive monoculture, agriculture, and other developments. This increases contact between humans and wildlife, provoking outbreaks of vector-born diseases such as Leishmaniasis (spread by sand flies) and others around the world.

Development of hydroelectric dams and mines, and other large infrastructure works, are often associated with standing water, which in turn is associated with increases in malaria-transmitting mosquitoes and spread of the disease in South America and Africa.

Similarly, the increasing occurrence and intensity of fires pushes wildlife to the edge of rural and urban areas where domestic animals, crops, garbage, and, people provide sources of food and shelter. Studies confirm that smoke from forest fires led to the displacement of frugivorous (fruit-eating) bats into farmland in Malaysia and parts of Asia, causing outbreaks of Nipah virus. Together with other factors, these conditions also seem to explain the increase in bat bites and rabies in humans and livestock in the Amazon region.

Through trade and trafficking, bushmeat and wildlife—and their pathogens—get distributed far and wide, intensifying contact with humans and significantly increasing the chances of disease transmission. These factors explain the geographical expansion of Ebola outbreaks and seem to explain the emergence of SARS-CoV-2 (the strain of coronavirus that causes COVID-19).

Finally, climate change plays a role in emergence of zoonoses by altering global temperature, as well as atmospheric and marine currents that enable the spread of infectious agents and vectors.  It also releases pathogens stored in polar icecaps, and redefines migratory routes of host species that allow pathogens to escape from their habitats.

Can you share with us examples from the Center’s research on the outbreak of emerging infectious diseases?

For 35 years, I have been working and conducting research in the semi-arid Caatinga in northeastern Brazil. We have studied the occurrence and similarity of intestinal worms between wild canids and domestic dogs in environmentally degraded areas. We also compared cattle, goats, and sheep. We found that animals who stay in their natural territories are less exposed to infection by parasites of other species. As wild animals venture into anthropized areas (populated by humans), they are exposed to infection by parasites from different hosts and also increase the risk of zoonoses. Our studies show that in the Caatinga, highly degraded areas strengthen the permanence of pathogens with high transmission capacity.

In the Amazon, we observed several outbreaks of New Castle virus in chickens owned by the communities along the Tapajos River. Development projects encouraged raising these as a protein alternative without considering their potential to spread viruses to wild birds, especially migratory species, nor assessing the risk of spreading the influenza virus.

What are some innovative systems and resources the Center is pioneering?  How do they contribute to the One Health approach to attain optimal health for people, animals, and the environment?

Our experience shows that monitoring wild animals in the field can detect the transmission of zoonotic pathogens before they cause disease in humans. To strengthen health surveillance and conservation, CISS developed SISS-Geo (Wildlife Health Information System), a citizen-science online tool for users to report photos and information of wild animals that identify abnormalities.  It can also issue real-time alerts. This helps investigate the circulation of infectious agents before they are transmitted to people.

We used the recent sylvatic yellow fever outbreaks in Brazil—the most significant outbreaks of the last 70 years—to assess the capacity of the system to prevent and control the disease. The records of dead or sick monkeys in the SISS-Geo helped confirm the dispersion routes of transmission two months before the disease reached humans, allowing the government to vaccinate people in priority areas. We learned that we can both save human lives and help conserve biodiversity through participatory community actions and technology.

What can be done to prevent future pandemics?

Ecosystems provide us with natural resources that we depend upon, but they have limits. Their collapse seems imminent unless we take immediate action to reorganize our way of life and reframe development in a way that conserves nature and prevents pandemics. Some ways we can do this are: