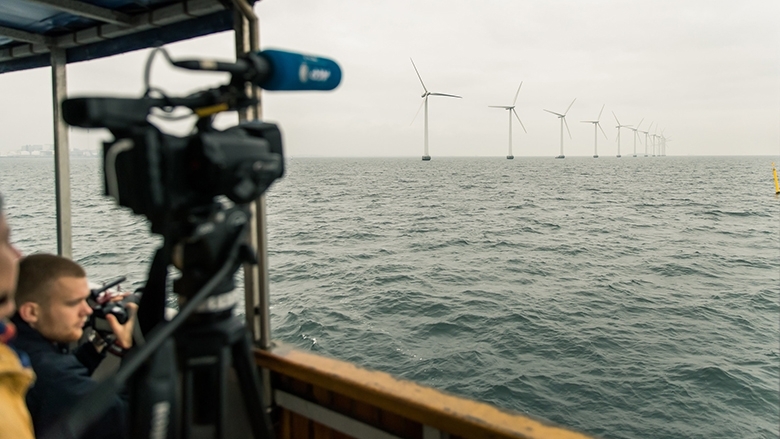 With nearly 8,000 kilometers of coastline, Brazil has immense potential for one of the most modern renewable energy sources: offshore wind power.

Brazil is one of the countries highlighted in a recent study published by the Energy Sector Management Assistance Program (ESMAP) and IFC, a member of the World Bank Group, for its potential to harness this energy source from fixed or floating turbines installed in the sea. The study also examines India, Morocco, the Philippines, South Africa, Sri Lanka, Turkey, and Vietnam, which together with Brazil have 3.1 terawatts of wind power potential in areas within 200 kilometers of the coast. That is approximately three times the installed electricity capacity in the European Union combined. Of the total, 1.2 terawatts is in Brazil’s offshore.

“We chose countries that we believed had more interest and resource potential. Brazil is highly active in wind power and although it still has considerable onshore potential to explore, the government has expressed a keen interest in offshore development,” said ESMAP Senior Energy Specialist Oliver Knight, one of the study’s authors.

Over the past year, the World Bank Group and the Brazilian government have participated in joint events and studies in offshore wind power, including creating a map of the country’s offshore wind power potential. The partners will continue to analyze ways to exploit this potential throughout 2020.

Before considering the future of offshore wind power, it is important to understand where, how, and why this technology became viable, including in Brazil.

Europe has been at the forefront of this technology since the first offshore wind farm was erected in 1991 off the coast of Vindeby, a coastal town in eastern Denmark. The farm had 11 turbines, each generating 450 kilowatts for a total capacity of nearly 5 megawatts (MW). Although it was closed in 2017, Vindeby paved the way for the construction of offshore wind farms throughout Europe. From 2000 to 2010, the system continued to expand in the southern part of the North Sea, the Irish Sea, and the Baltic Sea, regions with strong winds. The United Kingdom today has the largest and lowest-priced offshore wind industry in the world, with an accumulated capacity of 8.5 gigawatts (GW).

Worldwide, the offshore wind power sector has grown nearly fivefold since 2011, with 23 GW of installed capacity at the end of 2018.

Despite this expansion, offshore turbines have remained largely confined to Europe and China. This is because building offshore farms is more complicated, expensive, and slower than onshore farms. It takes two to three years to build an onshore wind farm from start to implementation, at costs ranging from $1 million to $2 million per project. An offshore wind farm, by comparison, takes five and 10 years to build and costs $10 million to $50 million.

"Brazil is highly active in wind power and although it still has considerable onshore potential to explore, the government has expressed a keen interest in offshore development"
Oliver Knight
ESMAP Senior Energy Specialist

Energy generation prices reflect the complexity of offshore wind power. For many years, prices averaged between $150 and $200 per megawatt/hour (MWh). But they began to decline in 2016 and 2017. The decline has come because of “technological improvements, economies of scale, maturation of supply chains, better procurement strategies, and the efforts of large and sophisticated project developers, including several from the utility and oil and gas sectors,” according to the ESMAP study.

As prices are expected to continue to come down, offshore wind energy should generate interest in emerging markets such as Brazil, helping to boost installed capacity. Between 7 GW to 11 GW of offshore wind capacity is expected to be added each year from 2019 to 2024, led by developing countries, and then speed up to between 15 GW and 21 GW per year from 2025 to 2030, according to ESMAP projections.

Annual investment in global offshore wind power is around $26 billion, or 8% of new global investments in clean energy. Like installed capacity, investments are expected to rise sharply, reaching an annual $700 billion by 2030.

According to the latest figures from Brazil’s Energy Research Office, wind power represents 7.6% of Brazil’s domestic power supply, with 48,475 GWh produced in 2018, an increase of 14.4% over the previous year. Offshore technology can increase this by a large amount. The possibilities for project development are extensive, too. Projects can be built that more closely reflect the demand of the large coastal cities, reducing the need for transmission investments and avoiding the social impacts of land-based projects.

However, several issues still need to be addressed, such as environmental management tools, adaptation of port infrastructure, and potential socioeconomic conflicts between offshore wind power and other activities.

Considering all of the above, it is crucial to define what technologies Brazil can use to fulfill the objectives in the Paris Agreement on climate change to have 45% percent of its energy matrix based on renewable sources by 2030, what would increase the participation of wind, solar, and biomass power to 23% of the total. Offshore wind power can play a big part in achieving this goal.