China has experienced the world’s largest and fastest rate of urbanization over the past three decades. In 1978, less than 20% of China’s population lived in cities.  By the end of 2018, the share was almost 60%, with more than 830 million people living in cities and towns.  China’s urbanization rate is projected to reach 80% by 2030, adding another 280 million urban inhabitants.

Small towns, including county towns and townships with a population of less than 200,000, play a key role in linking cities and rural areas and have the potential to accommodate rural-urban migration.  However, public services and utilities in small towns are lagging behind those in bigger cities.

The development of infrastructure for basic urban services in towns was listed as a critical target in China’s 12th Five-Plan (2011-2015). The National Plan on New Urbanization (2014-2020) issued by the State Council highlights the need for coordinated development of big, medium and small cities and towns and promotes co-building and sharing of infrastructure and public service facilities among towns.

Since 2015, the World Bank has been working with China through the Shaanxi Small Towns Infrastructure Project financed with a US$150 million loan to demonstrate how to improve infrastructure provision, service delivery and town management and create a more livable urban environment for residents.

Located in China’s western interior region, Shaanxi is an economically less developed province, with both GDP per capita and urbanization rate below the national average. In Shaanxi’s small cities and towns, the average per capita investment for basic urban infrastructure is only 68% of the national level, and the percentage of population with access to water supply, road space per resident, and length of drainage pipes per square kilometer of built-up area are 89%, 74% and 67% respectively. This is substantially lower than the national level. The poor urban infrastructure services and the lack of expertise and experience in town management severely hinders small towns’ development and expansion.

"The street is much better and cleaner. There are more people and more tourists. Our business is much better than before."
Zhao Hong
Resident of Wugong 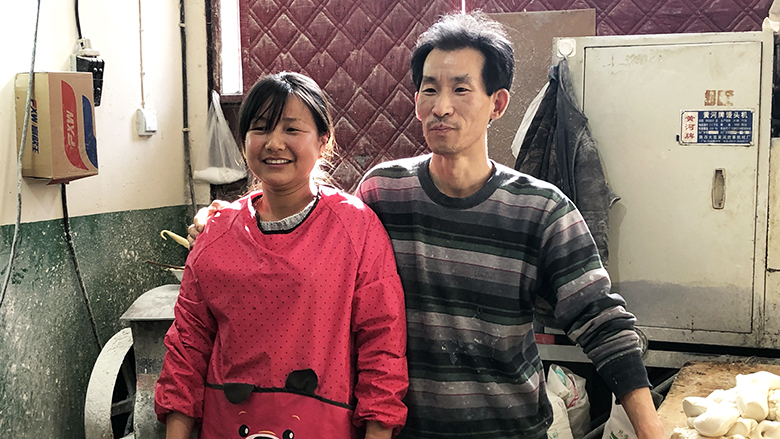 Zhaohong and her husband.

The project focuses on construction and rehabilitation of urban infrastructure, expanding the coverage of urban services, and strengthening town management capacity in nine towns in central Shaanxi, including five on China’s list of poorest counties.

Thanks to project support, the county town of Hanyin has traffic lights and road signs for the first time ever. Town residents learn to use zebra crossing while crossing the street, and car drivers and motorcycle riders are growing accustomed to yielding to pedestrians.  As a result, the number of road accidents has been declining.

“We used to have more than 10 traffic accidents a day. Now there are about four or five, much less than before,” said Yang Hui, a local policeman.  The town has about 8,000 cars and over 200,000 motorcycles, with about a 20% increase each year.

Wider and concrete-surfaced streets have replaced narrow and potholed dirt roads.  Along the street, a riverside park has been built to provide a new public space for residents.  It is not only a favorite place for square dancers but also for elderly people who come for walking and exercising.  Yao Ronggang, 72, was a vegetable farmer

and became an urban resident after the expanding town took over his land.  Today he is retired and enjoys a daily morning walk by the riverside with his friends.

Wugong is another town covered by the project.  With a history of over 2,300 years, the old town boasts several historical sites including the place where Houji, the earliest official in charge of agriculture in Chinese history, taught people how to grow crops, as well as a pagoda and a town god’s temple built by Emperor Taizong of the Tang Dynasty (598-649).

The main street in front of the ancient Town God’s Temple has been paved with millstones collected from the countryside, based on an old folk story.  Zhao Hong and her husband have been selling steamed buns on the street and their business flourished after the street was rehabilitated.

“The street is much better and cleaner. There are more people and more tourists. Our business is much better than before,” said Zhao. The number of shops along the street has almost doubled since rehabilitation work was completed.

The project also financed a new water plant, putting an end to the two-hour-a-day unreliable water supply.  Yang Hongqin, a resident of Wugong, is very happy about it.  “The water is cleaner and has no sand. I can use water anytime now,” she said.

Even smaller back streets and lanes have been paved, along with separated storm drains and sanitary sewers installed underground that connect all houses and carry domestic wastewater to a treatment plant.  With the closing of eight sewage outlets that used to discharge untreated sewage directly into the Qishui River, water quality is improving, and white storks are returning to the river. With better infrastructure, the town is set to attract more tourists.

Upon project completion in 2021, about 850,000 residents in nine small towns are expected to benefit from new or upgraded roads and improved water supply, storm drainage and wastewater services.

For urban managers of seven towns, a new municipal assets management system developed under the project has made their work easier and more efficient. All surface and underground infrastructure assets, such as roads, street lighting and landscaping, water supply and wastewater, and other public service utilities were registered and mapped. A database was developed with detailed records on individual assets including their construction date and cost, history of repair and maintenance, original and residual value, and the responsible operation and maintenance companies.

“This gives us a clear idea of the state of our assets and is very useful in maintenance planning and budgeting. It has enabled us to change from reactive to proactive maintenance,” said Chen Jun, a deputy director of Hanyin Project Management Office.

The next step is to build a smart municipal assets management system that will allow professional inspectors as well as citizens to report any problems related to municipal public service facilities through mobile apps and the maintenance company to report back after the problem is fixed, according to Chen. “It will help us manage our town more efficiently and provide better services to the citizens,” he said.

Shaanxi was among the first provinces in China to introduce the small-town municipal assets management system.  “We will draw lessons from our asset management experience and develop policies and institutions to replicate the approach in other parts of the province and promote high-quality small towns development,” said Zhao Xinyong, chief engineer of Shaanxi Provincial Development and Reform Commission that oversees the project.