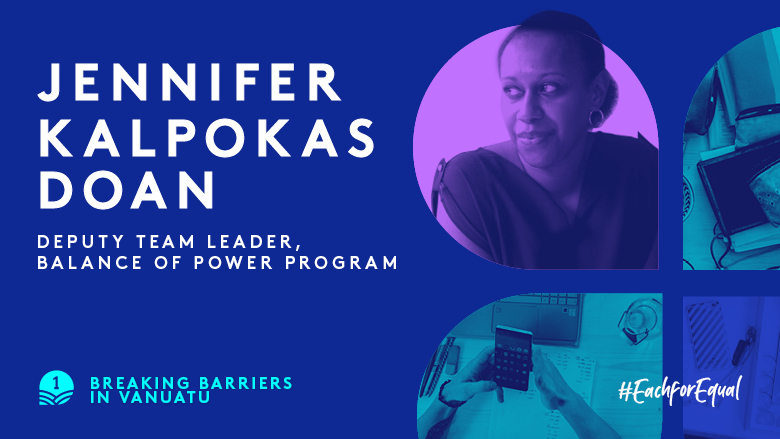 For International Women’s Day 2020, we’re getting to know the pioneering women across the Pacific and Papua New Guinea who are breaking barriers and creating change for the decade ahead. Jennifer Kalpokas Doan doesn’t identify as a feminist, but someone who believes in good and strong governance. As Deputy Team Leader for the Balance of Power program in Vanuatu, she is determined to see more women in Parliament because governing is a job “any human being can do.”

I grew up in a family that was very involved in politics. My father was involved in the independence movement in Vanuatu. He worked very closely with our first Prime Minister, Walter Lini, and he himself became the country’s second Prime Minister. Politics was all that we ever heard about growing up.

I have three older sisters and one younger brother, and my dad raised us with no gender bias. We were all encouraged to do whatever we wanted to do. My father would always tell me, “You can become a minister, or you can be a member of parliament”.

So, you planned to become a politician?

I studied Political Science and International Relations in Hawaii, and I always thought I would move home and work for the government in foreign affairs. Of course, that didn't happen, because things don’t always work the way you want them to. I taught history at my old high school for a few years and then I went back to university and I studied a Master’s of Public Administration and Public Policy.

When I moved back to Vanuatu I still couldn't get the job I wanted, but a job came up working for an economic growth and good governance development program for the Australian Department of Foreign Affairs & Trade (DFAT).

I did that for more than 11 years, and then the opportunity came up to be the Deputy Team Leader on a new program called Balance of Power. I've never identified as a feminist; I'm just interested in good governance and I wanted to make a change in removing the many barriers for women to participate in leadership roles. I started the role in September last year.

What is different about the Balance for Power program?

There has been a lot of work around women in leadership at an individual level, giving them training and mentoring. While this has been effective in many instances, it is still not translating into more women in positions of decision making and (political) leadership. So, it’s not about whether women are good leaders, people simply aren't voting for them. The issue is about people, in Vanuatu and other Pacific countries, recognizing women as legitimate leaders.

The Pacific has women CEOs, CFOs, pilots and surgeons. Why do we trust a woman doctor to operate on us and save our life, and not to sit in a chair in parliament and make laws? That doesn't make sense to me. Balance of Power wants to show that it's not about a woman doing a man's job, it’s about doing a job that any human being can do. We need to redefine the notions of what is culturally appropriate.

You are the first woman to be appointed to the Bank South Pacific Vanuatu Board. How did that come about?

The Bank South Pacific Vanuatu Board did their own research and due diligence based on their criteria and they approached me and asked if I was interested. I said, “my background isn't in the private sector, much less in banking,” but after some assessments they offered me the position and I accepted. I’m the only woman on the Vanuatu country Board at the moment, but it sets a good precedent moving forward.

What do you think is needed in Vanuatu to further ensure equality between men and women?

I believe in our culture it isn’t necessarily a distinction about equality, but about a placement of roles and responsibilities. Women’s traditional roles, such as housework and nurturing children, have always been regarded as inferior. Men are also regarded to be less masculine or strong if they choose to nurture or raise children, and so the inequality goes both ways. I think people pick and choose when it's convenient for them to use the culture, or religion, to justify why they perpetuate gender stereotypes.

The Balance of Power program is planning an exhibition this year, as part of the country’s 40th anniversary celebrations, to showcase women leaders, like engineers, doctors and pilots, that are breaking barriers in the male dominated workforce. We want to showcase that women are legitimate leaders. Gender shouldn’t restrict a woman from doing anything, or, because you're a man, it shouldn't stop you from being a stay-at-home dad and looking after the children if that’s what you want.

Social norm change doesn't happen overnight; it happens over a period of years. One of the goals of the program is that we see more women in parliament. Hopefully at the next election in four years’ time you can see the impact of changing people’s perceptions about women’s roles.

What is your advice to Pacific women?

If you believe in something enough, just do it. Don't wait for recognition, don't look to others for validation. If you're passionate about something, and you believe in it, and you're doing it well, people will recognize you for it.

World Bank Group and its employees.