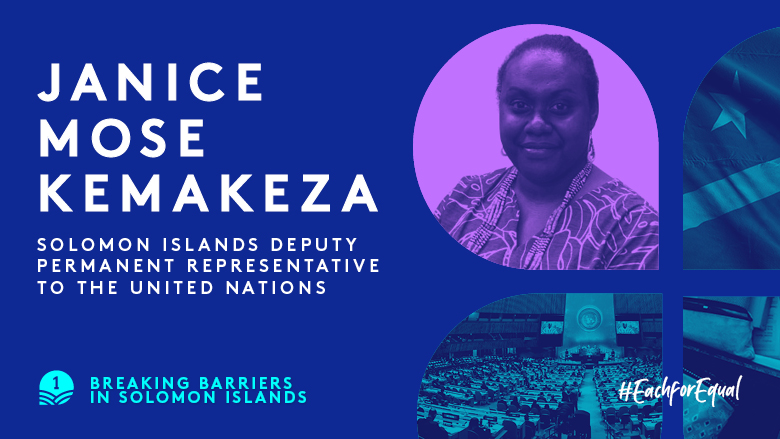 For International Women’s Day 2020, we’re getting to know the pioneering women across the Pacific and Papua New Guinea who are breaking barriers and creating change for the decade ahead. Janice Mose Kemakeza comes from a family of diplomats, but as the Solomon Islands Deputy Permanent Representative to the United Nations, she is forging her own path and fighting for the issues that matter most to her country at the global level.

Did you always know you wanted to be a diplomat?

I am the child of two diplomats. My father previously worked in the external trade department and my mother was the career diplomat and was posted as a counsellor to different countries. I went to school in the countries my parents worked in as a child and I visited other countries with my parents, so I developed a passion for traveling at a young age.

I always knew I would choose a line of work that had travel associated with it, but I didn’t set out to be a diplomat. I wanted to work in the development sector, and with the government on policy implementation, but the foreign affairs department was the first government agency to accept my job application and I have been working with them for over 10 years now.

What inspires you about your work?

When I studied politics, I realized a lot of it is theory. But in foreign affairs you're dealing with issues that impact people on a day-to-day basis. I deal with a range of issues, from human rights to the arms trade, climate change to sustainable development, and education to ocean conservation.

Climate change and sea level rise is not just something I’ve read about in a book. I actually see in my village how the shoreline has receded from where I used to play. I’ve realized that some issues are too big for smaller countries like Solomon Islands to handle on their own.

I try to influence the multilateral agenda so that people are not only talking about the issue, but are actively putting resources towards addressing it. Right now I'm very much involved in the area of ocean biodiversity and working on a draft treaty that I am helping to negotiate.

New York is your first overseas posting. What do you love about the city and what do you miss from home?

New York is unlike any other city I've ever lived in. It's so dense and there's always something happening. There are always cars on the street and sirens going off; it can be noisy. If I were in my village, I’d hear the sound of waves crashing on the beach. I miss that - and unless I make Pacific Island food, I don't get it.

But the one thing I love about New York is that it's so multicultural. You can walk down the street and find cuisines from anywhere in the world, whether it's Egyptian, Syrian, Moroccan or Cuban. It’s the kind of food that I would definitely not find back home. The city feeds my passion for traveling, meeting people from different places and learning about other cultures.

Do you think there are still barriers to gender equality in Solomon Islands?

I think it's pretty hard to ignore gender inequality when you live in a society where the patriarchy and its role is pretty clear. I think having my mother shatter this particular glass ceiling before me made things easier for me. I could see that you can be successful as a woman in a culture like that of Solomon Islands. But there are still barriers culturally. You are told that certain things aren’t appropriate for a girl or a woman to do, and even what to wear.

What do you think is needed in Solomon Islands to further equality between men and women?

I believe that education is key to accessing opportunities in this global era, and so I think it’s important that equal opportunities are given to girls as well as boys.

What advice would you give to women in the Pacific?

I'd say go for it. Dream big, as big as you can, and then work hard to get there. You will come across people who will tell you that it can't be done.. But if you want to be something else, you should do it.