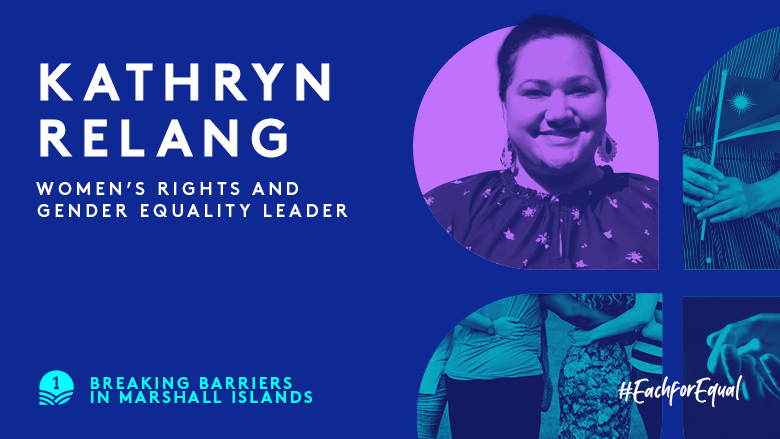 For International Women’s Day 2020, we’re getting to know the pioneering women across the Pacific and Papua New Guinea who are breaking barriers and creating change for the decade ahead. Kathryn Relang is the former Executive Director of Women United Together Marshall Islands, and today, working for the Pacific Community Regional Rights Resource Team, she continues to fight for human rights at home and across the region.

How did you end up working for Women United Together Marshall Islands (WUTMI)?

I finished high school in Oregon and then attended the University of Hawaii where I studied anthropology and linguistics. After graduation I moved back to the Marshall Islands for a job I was offered. However, it didn’t pan out and I was quickly offered one at WUTMI.

What inspired you to work for a women’s rights organization?

Well, it wasn’t a very conscious choice in the beginning. It all just happened. I needed work and I was offered a job at WUTMI as a coordinator for a project on ending violence against women. When I started working on the project, I wasn't very aware of the situation and how little work had been done to address issues related to women and girls in the Marshall Islands. So, I immediately became committed to the work because there was nobody else in the country that was doing it.

And then you worked for WUTMI for eight years. Why did you stay that long?

As a young woman myself I thought, "what if I was experiencing violence and had nobody to turn to?" That kept me going. There were also a lot of opportunities working for WUTMI, both nationally and internationally, that built up my knowledge and skills. It was motivating to receive so much support through the network of women’s organizations and NGOs across the Pacific. And then I worked my way up to Executive Director.

I gained my passion working for WUTMI. As you do the work, you really learn about what people think and how they react to certain issues and each other. Though I didn’t get a job related to my studies, the work at WUTMI still brought out the anthropologist in me.

Did you see a positive change in women’s rights while you were working for WUTMI?

Yes, we worked really hard to pass legislation for domestic violence prevention and protection while I was working with WUTMI. We also undertook a national study on violence against women, and along with the passage of the legislation, that was a really big accomplishment. Around the time we were campaigning for the law to change a woman was brutally murdered by her husband. It was heartbreaking and I think it impacted a lot of people, especially parliament members, which ensured the legislation was passed. But, of course, it also took a lot of education and awareness. A lot of people referred to the legislation as ‘WUTMI's Law’ because we were leading the campaign on the front lines.

There’s also been a rise in knowledge and support to end violence against women and promoting women in leadership positions. WUTMI led a lot of educational campaigns and programs about preventing violence against women and promoting women in decision-making. This led to the establishment of the first-ever support service for women and girls who experience violence, which has been a very rewarding outcome, especially as reporting has increased as a result.

What do you think is needed in Marshall Islands to further ensure equality between men and women?

Last year the government passed the Gender Equality Act, but I think a lot of education still needs to be done about how to implement it, particularly with our government officials and parliament members. There's a lot of people, including people in law enforcement, that aren't aware of the legislation and their roles and responsibilities around these laws.

There's also a cultural element. We have a non-confrontational culture in the Marshall Islands. So, when violence does occur, it's often not reported. There's a lot of fear and backlash from the community if it is, especially from officials if the situation involves a relative or someone of a high level.

You left WUTMI in early 2018 to work for the Pacific Community. What does your work involve now?

The work is similar; however, I do work with the government more now. The Regional Rights Resource Team that I work with is the human rights program for the Pacific Community and we support governments with the implementation of their obligations under human rights treaties and conventions, as well as strengthening judiciaries and addressing violence against women. We also support civil society organizations and school systems around human rights, gender, gender equality, and ending violence against women.

People know that I work in human rights, gender equality and violence against women, and so my reputation in the area certainly helps the cause.

What is your hope for Pacific women in the future?

I hope that we'll be in a position where we don't have to question a lot of who we are and what we do. I hope we just see people as people and not as this gender or that gender.