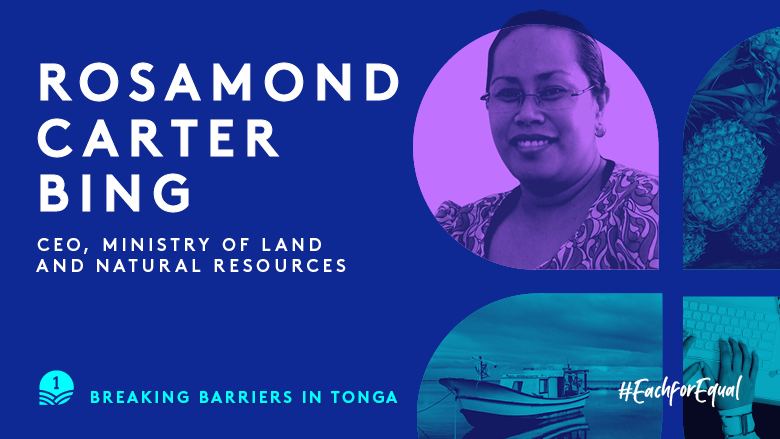 For International Women’s Day 2020, we’re getting to know the pioneering women across the Pacific and Papua New Guinea who are breaking barriers and creating change for the decade ahead. Rosamond Carter Bing wasn’t sure where her career in law would take her, but as CEO of Tonga’s Ministry of Land and Natural Resources, her keen negotiation skills are being put to good use to protect the planet’s oceans for future generations.

Did you always know you wanted to study law?

I was raised by a single mother who was supported by a large extended family.  Mom instilled in me and my siblings that a solid education and hard work would enable us to move ahead in life. She always inspired me to take up the most challenging career that I could dream of.

But, my mom wasn't happy that I chose a legal career rather than medicine. But from a very young age, I was conscious about how the law and social justice played a role in allowing marginalized people to access justice to protect their rights and improve their lives. It was something that I was always passionate about, so I thought I'll take up law and see where that takes me.

How did you come to work at the Ministry of Land and Natural Resources?

After completing my law degree in Canberra, I moved back home and worked as a media/research assistant at the Australian High Commission, then I moved to AusAID. I spent three years there, and then I decided to join the public service. The first ministry to contact me was the Ministry of Lands and Natural Resources and I grabbed the opportunity. I joined the Ministry in 2002, and I've spent most of my 18-year career here as an in-house counsel, and as CEO for the past three years.

When I joined, it was the first time in many years that the ministry had employed an in-house counsel. But I was embraced by the ministry because I addressed a critical need for a legal adviser to be on hand at all times. Everything I’ve learned, I learned from my colleagues. I was mentored and had the opportunity to gain hands-on, practical experience.

Have you found it challenging being a female CEO?

When I first became CEO, around 50 percent of the CEOs in the public service were women. Joining the executive team at that time, with a healthy gender balance, was a bonus. The numbers have since dropped, but having met that target once I think it's created an environment where there's stronger support for women in CEO positions.

At deputy level, I believe we have more than 50 percent women, so the main support group for the CEO position has strong female participation. In Tonga, equality between men and women has been approached from the institutional level. Through mainstreaming of gender equality in many sectors, the opportunities and access for women to an education, and to excel in whatever career they choose, has improved over time.

One of the key catalysts is the public sector reforms that have been implemented by the Government. CEOs used to be appointed until retirement; now we have adopted a merits-based recruitment system and a new performance management system that reflects that across the public service. I think these changes have enabled more female civil servants to be recognized for their contributions to the delivery of services to our people.

At one point both you and your sister were CEOs. What was that like?

My sister and I were both in CEO positions for about a year – she was the CEO of the Ministry of Internal Affairs. It was an interesting dynamic. We have very different personalities, qualifications and skill sets. We approached issues in quite different ways but I believe that we both brought passion and enthusiasm to our roles.

What are you working on at the moment?

First, I am advocating for the digitization and automation of Tonga’s land administration system. This is to enhance the Ministry’s service delivery. Secondly, I am working on the legal and policy framework for the management of Tonga’s oceans resources.

It is often said that Tonga is a small island nation, but we have a very vast ocean rich with marine resources. The ocean is our home, our identity and our culture and we must manage it to promote sustainable livelihoods, especially for future generations.

Do you believe there are gender inequalities that still need to be addressed in Tonga?

Tongan land law restricts women's access to land in some respects. However, I believe that our legal system and our land laws allows for the promotion of social and economic policies regarding land access for women. These gender inequalities could be addressed with a targeted focus on developmental initiatives and improving the status of women. I am blessed to be well-placed to drive this change.