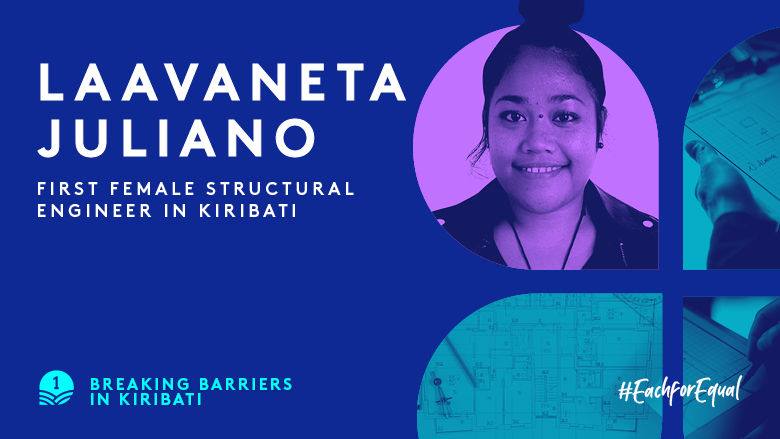 For International Women’s Day 2020, we’re getting to know the pioneering women across the Pacific and Papua New Guinea who are breaking barriers and creating change for the decade ahead. When she graduated in 2017, Laavaneta Juliano was the first female structural engineer in Kiribati. She is currently an officer in charge at the Quality Control and Inspection Unit in the Ministry of Infrastructure and Sustainable Energy. As her country tackles the impacts of climate change, Laavaneta hopes to inspire more i-Kiribati women to become engineers.

Did you always want to become an engineer?

I grew up with a brother who was very creative with building scraps into an object – that gave me a glimpse of what it was like to have an engineering mind. As a child, I used to solve problems from mathematics textbooks and I was always winning prizes in maths. During high school I actually wanted to be a maritime captain, because my grandfather was a captain. But engineering was one of the most pressing needs for Kiribati when I was looking for a scholarship.

I completed a Diploma in Civil Engineering at the Fijian National University in 2010 and returned home to work as the first qualified female civil engineer. That's when I started developing my passion for engineering. I then worked for the Kiribati government for three years, but I came to realize my knowledge was limited. So, I went on to complete an honours degree in Civil and Structural Engineering at the University of Adelaide as part of an Australia Awards scholarship.

It is my dream to be recognized for the contributions I make to my country’s development. It is my strong love for my people, country and structures that inspires my passion for engineering work.

Were there challenges being a Pacific woman studying in Australia?

As a Pacific woman who grew up in a close-knit relationship with my family, leaving them behind, especially my children, was hard to adjust to. I had two boys then, but now I have four.

My experience in Australia was challenging, but I had a strong support system at the university. My lecturers and professors, and, in particular, my liaison officer, were very supportive and helpful. I was the only Pacific Islander studying engineering at the university at the time. Being in Australia for the first time was a huge cultural shock for me and I had to learn to adapt.

How did you find working in a male-dominated field when you returned to Kiribati?

I don’t find it hard working in a male-dominated environment. We maintain respect with one another, encourage a learning environment, and appreciate everyone’s efforts and ideas. Culturally, women are often left out by men during meetings in Kiribati. However, in engineering, your knowledge is the key to breaking that barrier. I am often the only woman in the room during meetings, but everyone respects my voice because they trust my knowledge and skills as a structural engineer.

The only challenge working in a male-dominated field is men and their silly jokes, which is normal and acceptable in Kiribati. I have experienced countless times men whistling and saying silly jokes when I go out to do inspection on a construction site. I guess we are used to it, and understand the behaviour from a cultural viewpoint, but that could be offensive to a foreign woman and still needs to be changed.

What do you think needs to be done to create more equality between men and women in Kiribati?

Women deserve more equal opportunities in engineering so they can fulfil their potential. Women are also key to making informed decisions and can better understand the needs of vulnerable groups, especially women and children.

Now, with the impacts of climate change, there's a lot of development going on in Kiribati. There’s a lot of problems related to climate change that require engineering solutions. And women have an important role in engineering – they build things differently. We could have more informed decisions when it comes to designing something that addresses the needs of women. I think there's a lot of women with great potential that can become part of engineering work in Kiribati.

What are your hopes for the future?

My hope is big: I want to use my position now to inspire and motivate women to do engineering work. I want to set an example for my sons. I think my position will give them a respect for women; they will understand that women have potential.