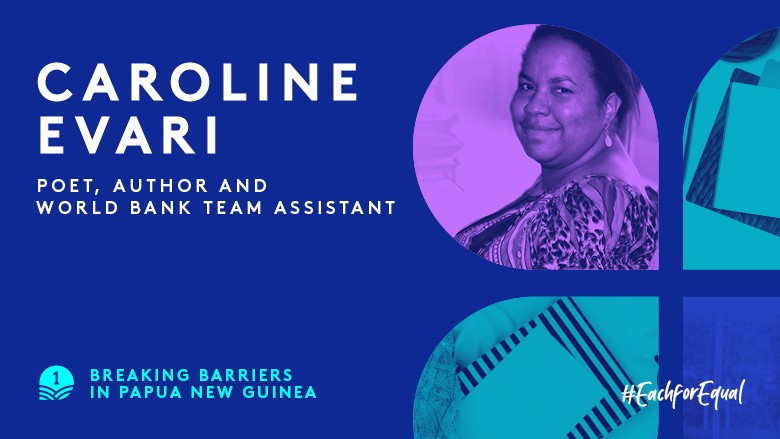 For International Women’s Day 2020, we’re getting to know the pioneering women across the Pacific and Papua New Guinea who are breaking barriers and creating change for the decade ahead. Caroline Evari began writing at the age of six. She is now the author of 28 children’s books and has published her own book of poems, Nanu Sina: My Words, all while supporting the World Bank and it’s nine projects in Papua New Guinea and raising two sons.

What inspired you to start writing at such a young age?

After I had completed first grade in school my family moved from Port Moresby back to my father’s village in Oro Province. I was supposed to continue on to grade two, but there weren’t any schools nearby so I spent my childhood days writing. I would just walk around the village with a notebook and describe whatever I could see. It was my way of keeping myself in school.

Did you eventually go back to school?

Yes, I moved back to Port Moresby in 2001 and started school again. I realized I was doing so well in English compared to other subjects because I spent my time away from school writing. So, I was able to catch up quickly.

Later on, when I attended Marianville Secondary School, we were required to keep school journals every year, and that’s how I discovered my talent for writing poems. At the end of grade 12 I had written a total of 60 poems and they now make up the majority of my book, Nanu Sina: My Words.

What do you love about writing poetry?

For me, poetry is the best way to express myself. Most of my published poems were written when I was growing up, at a stage when I was living away from my parents. I missed them, but I wanted to achieve something with my life so I had to somehow let go of those emotions and thoughts. I find poetry a really good way for people to let go of any stress, anxiety, depression or anything that may be pulling them down.

How did you get into writing children’s books?

In 2017, I wrote two children’s stories titled Zuki the Crocodile and Old Mulga and the Pawpaw Tree for the organization Library for All. The stories were then developed into picture books in 2019 and distributed to schools around PNG.

Given that I work with the World Bank, I could see that we shouldn’t just advocate for Papua New Guineans to learn to read, we need to also write our own stories and have them published into books. The majority of the books in schools are not written by us, they are written by people from other parts of the world.

I had this idea: what if we started teaching our people to write their own stories? Or what if we started teaching each other to express ourselves through poetry? That would have a big impact. I started reaching out to schools and teachers and motivating them to encourage their students to write their own stories. I give free talks in schools on why writing is so important and I hold children’s story writing workshops.

You’ve been lucky enough to be mentored by popular PNG writer, Rashmii Amoah Bell – what was that like?

Yes, in 2016, along with 45 other PNG women, I contributed to the My Walk to Equality anthology that Rashmii edited – it was the first ever collection of writing from Papua New Guinean women.

Rashmii then mentored me for the first six months after I published my book of poetry. It was really important for me because Rashmii is someone that I look up to as a role model. We don't often have Papua New Guinean women as  professional mentors. We are always looking outside PNG for inspiration and motivation. But, in this case, I was very privileged to receive that mentorship from her, and it was really inspiring for me.

Do you think there will be more female PNG writers in the future?

Yes, and I do believe we already have a good number of Papua New Guinean female writers. There’s a lot of change and positive responses from communities with women being more vocal, and it's really a good thing to see. So I hope that this momentum of women writers gaining support will continue to increase.

I'm already working on another book of poems, but my hope for the future is to write more; not just poems, but more children's story books. I want to help capture our culture and languages that are dying away.

I also hope that my two sons will grow into responsible men that are able to respect and understand women. I want them to accept women as they are; seeing women as equals in society. I think that’s my biggest aim for my sons’ future.

Follow us on Facebook to make sure you don’t miss any of our Pacific Women Breaking Barriers series.