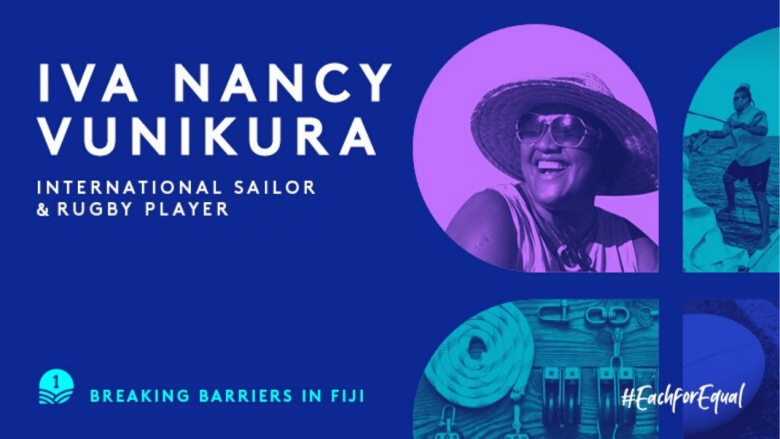 For International Women’s Day 2020, we’re getting to know the pioneering women across the Pacific and Papua New Guinea who are breaking barriers and creating change for the decade ahead. Iva Nancy Vunikura represented Fiji as a national rugby player and won gold in powerlifting at the Pacific Games, before joining the Okeanos Foundation for the Sea as a vaka (traditional double-hulled canoe) voyager. She has sailed more than 70,000 nautical miles to spread the word about using traditional Pacific knowledge to create a sustainable future.

How did you get into playing rugby?

I lost my mum when I was 18, and growing up on the island of Gau in Fiji, I was struggling with life. A friend hooked me up with rugby and I really enjoyed it. It stopped me from doing other things that could have been bad, and then I represented Fiji in Sevens and Fifteens, and it changed my life.

Back then, 10 to 15 years ago, women weren't accepted. It was very hard because a lot of discrimination was happening, but that didn't stop me from doing it. I met friends through rugby, and that's how I got into sailing too.

But now in Fiji, female rugby is a main sport, an Olympic sport. So there's a lot of girls that are playing the game now, which is really good to see. People are changing their perspective in life, and seeing that women can do things too.

What inspired you to start sailing?

In 2011, the Fiji Voyaging Society was looking for volunteers and because I am physically strong, my friend encouraged me to try out. And then I got a job out of it sailing for the Okeanos Foundation for the Sea. I worked on Okeanos’ 72-foot vaka called Uto Ni Yalo (‘Heart of the Spirit’ in Fijian), touring the world to promote sailing culture and ocean conservation.

I got to travel all over the world and meet new people. The foundation was trying to revive traditional knowledge, so I got to sail around the Pacific teaching people how to sail and how to protect the ocean. I belong to a proud family of voyagers from the Pacific, but, before, I didn’t know much about my own culture. Now I can tell you stories of our ancestors.

What was it like being a female sailor in the Pacific?

There's a few female sailors in the Pacific, but on my canoe there was only me, and I was working with 10 boys. It was quite challenging, but whatever the boys were doing I was doing so everyone was working together as a team.

Some people in Fiji say, "your place is at home and to cook". But I try to change mindsets when I'm out on the sea. We can do what the men can do too. If I can do it, anybody can do it. I enjoyed it, and I kept up with what the men were doing, even pulling up big anchors out of the ocean.

Do you think you helped change people’s minds about the role of women in the Pacific?

Yes, I think so. I would be working with the guys on board, and they would tell me, "It does make a change when a woman is working with us. Everything is different; everything is going in the right direction.” So, I feel great when they tell me that.

Last year I trained men on the island of Yap in the Federated States of Micronesia,

where women aren’t traditionally sailors. The Okeanos team had to secure permission from a chief so I could participate. We needed to respect the custom and culture. It was hard for me, but they accepted it… and so I broke the barrier, you know? We need to be working as one.

Women can do whatever men are doing. Well, that's how I feel. But, I don't talk much usually. I'm more into action.

But you did talk at COP23 in Germany to world leaders about climate change in the Pacific – what was that like?

Well, the foundation chose me to talk about what we do, and I was scared because I was talking to big people, like prime ministers and scientists. I was so nervous. But I told my story, and at the end everyone was clapping, and they liked my stories, so that was cool.

They were wanting to hear my story more than anything else. Because I saw and I lived what I was doing. For them, they were just writing and looking at the theory of everything.

We know that climate change is happening. I’ve seen the sea level rise in Marshall Islands in recent years. I am proud to have helped communities and the Pacific kids that are growing up understand the importance of saving our environment, and that our ocean is not to be polluted. The knowledge needs to be unlocked. Those are the things that matter. I did something that will protect future generations by sharing my story with world leaders and pushing for the use of traditional canoes as a form of island transportation.

What’s next for you?

This year I'm getting back into rugby. I'm 39, but it's never too late to try and play the game that I used to love.

I'm very independent, so when I want to do something, I do it. Nobody's stopping me from what I want to do. I want Pacific women to know you can just be yourself and whatever you do, do it with a good heart. Everything I do, I do wholeheartedly.

Follow us on Facebook to make sure you don’t miss any of our Pacific Women Breaking Barriers series.