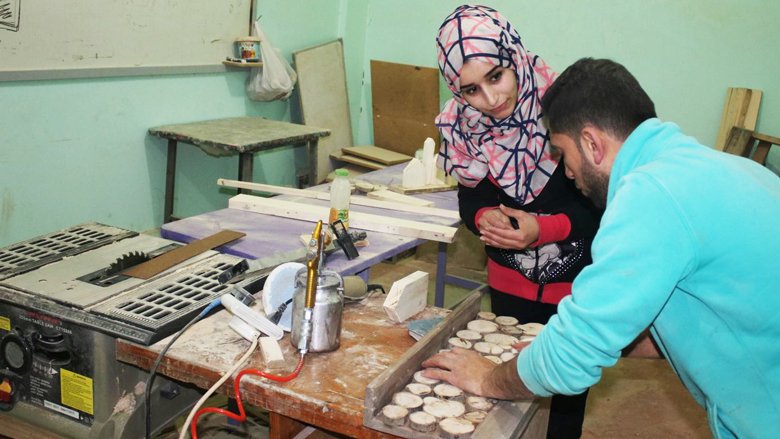 War and decades of isolation have taken their toll on the garment industry in Iraq, with much of the infrastructure either damaged or neglected. Women, who constituted the largest share of employees, lost jobs and the opportunity for a better life in communities where there were few other options for work.

Today, there are signs of promise with the upcoming re-opening of an old factory in the historic Al-Khadhmiya district of Baghdad. This will contribute to revitalizing the garment industry, creating new hope for vulnerable women to earn income and thread back together their lives and that of their families.

As part of the consultative process with various stakeholders and potential beneficiaries around the Women's Economic Empowerment Action Plan (WEEAP), the Iraq Mashreq Gender Facility (MGF) team facilitated the dialogue between the Ministry of Industry and the Al-Mishkat Cultural Association (NGO). As a result, there was an agreement that the former publicly-run Al-TERAZE Tailoring Factory will be re-opened under the leadership of the Al-Mishkat Cultural Association. The factory, which includes dozens of sewing machines, will focus on the production of school uniforms and women’s clothing among other products.

"The Al-TERAZE Tailoring Factory was the most practical place to start," said Dr. Iman al-Khafaji, Head of Al-Mishkat Cultural Association. "This is for several reasons. First, the factory was established decades ago and needs only maintenance in order to get it up and running. Secondly, there are great advantages to the factory in Al-Kadhimiya. The city is stable and secure with one of the largest popular markets in Baghdad. The factory is also large and will allow us to create glass showrooms for the products in the future."

As a first step, the Al-Mishkat Cultural Association is planning to provide free-of-charge training to a group of 50 women. Once these women successfully complete this training course, they will be employed in the factory with a daily wage of $8, which is slightly above the minimum wage paid in public sector. To ensure that the program benefits the most vulnerable groups, specific employment will be facilitated for low-skilled female workers and those with lower levels of education in poor households.

Although the initial operating plan will be limited to employing 50 women, the association plans to increase the number of female employees in the future. The infrastructure of the factory can accommodate up to 1,000 workers, which is the ultimate target of the association. Engaging male leaders and investors to provide additional training and support will also take place to increase the capacity of employment in the factory. This will be supported by the MGF through connecting various stakeholders from the public and private sector in order to boost women’s employment. Multiple activities under the WEEAP of Iraq will be critical to support this project, such as preferential agreements. The factory will be re-opened once an agreement with the Ministry of Industry is concluded.

Women in Iraq were not always economically marginalized. In the 70’s, women represented a significant share of students and professionals in medicine, engineering, and technical specialists in the civil service. It was only after years of war, and during the economic sanctions, that women were gradually pushed out of the labor force to make room for men who were returning from the battlefield and in need of work. Compounding the situation, safety in such a fragile and conflict environment was an important concern for women. A 2009 Oxfam study shows that 60% of women surveyed said they did not feel safe traveling to other towns and 30% said that they did not even feel safe traveling freely in their own communities, if for example, they had to go to the market or work.

To address concerns about safety surrounding women’s mobility, and thereby support women’s access to these jobs, Dr. Khawla Al-Asadi, Director of Rafidain Bank, agreed to provide a loan of US $21,000 to the NGO in order to purchase buses to transport women to and from the factory. Additional considerations extend beyond facilitating access to work but also ensuring a productive working environment. For example, in the district where the factory is located, electricity is provided only three hours a day which is not sufficient to operate the factory, thereby impacting the number of hours the factory can operate (and women’s ability to work). An agreement with private banks and electricity companies to install solar cells and panels to operate the sewing machines through solar energy is in the making. This will increase operating hours and allow for greater employment opportunities.

"I am very optimistic," says Dr. Iman Khafaji. "I always say that a woman has in every finger a profession and she is able to master everything at once."